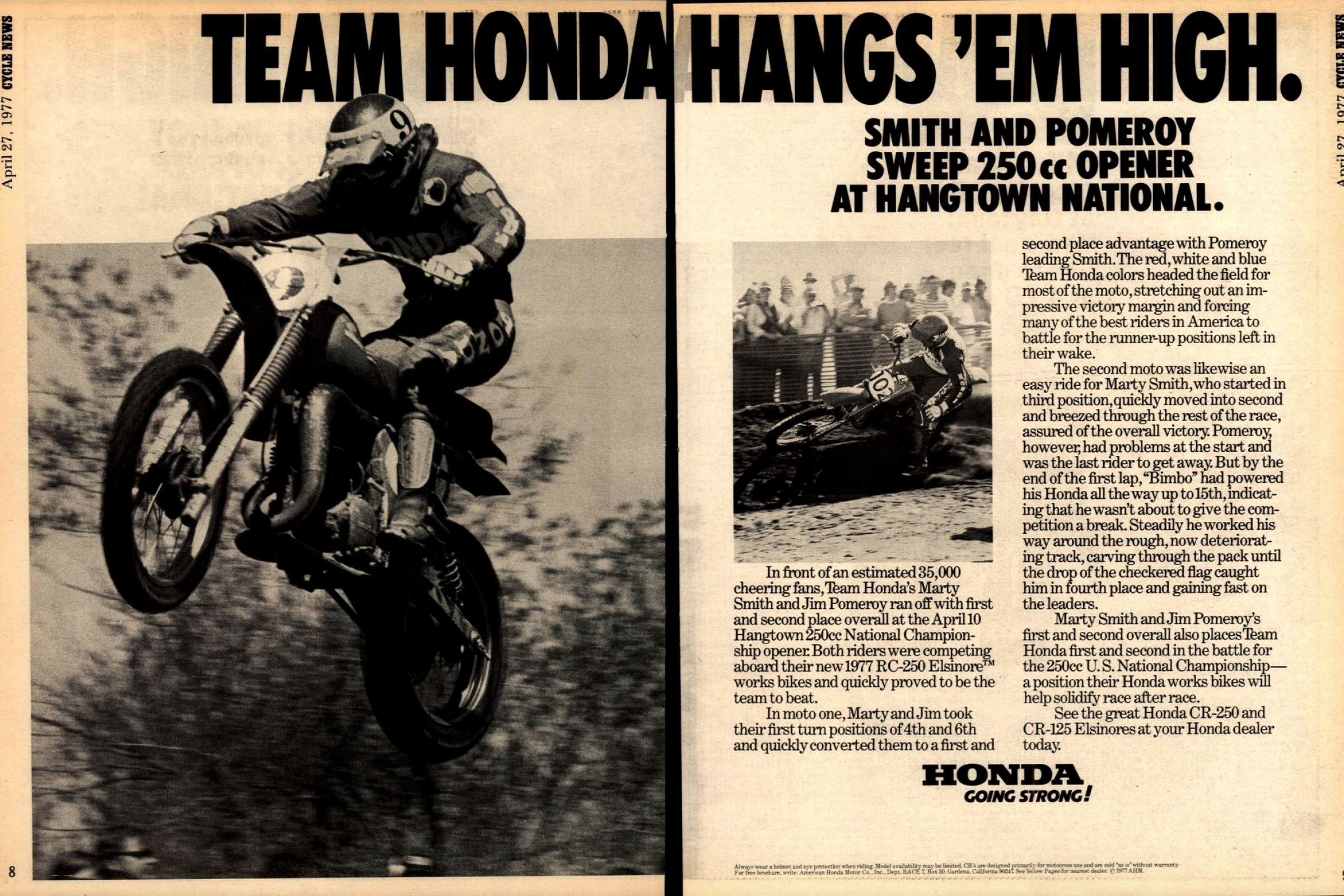 On This Day in Moto April 10

Bob Hannah won his second straight AMA 250 National on his new works Honda. Hannah had switched from Yamaha after seven years with the brand and was hoping to reward them with the 1983 AMA Supercross and AMA 250 National Championship. Finishing second was the rider Yamaha had basically pegged to replace him—a young Rick Johnson, who might have been the '82 AMA 250 National Champ if not for a broken wheel at the last round in Colorado. Finishing third was Hannah's younger Honda teammate David Bailey.

In 1983, Saddleback was a tripleheader, with Yamaha's Broc Glover winning the 500 class over Kawasaki's Kent Howerton and Honda Support rider Phil Larson. And in the 125 Class, Honda's Johnny O'Mara topped Kawasaki's Jeff Ward and Yamaha's Ron Lechien, who was competing in his second career AMA National.

Team Honda's Marty Smith and Jim Pomeroy went 1-2 to open the 1977 AMA 250cc Motocross Championship at the Hangtown Classic in Plymouth, California. For Smith, it was sweet redemption for the previous season's loss at Hangtown to Bob "Hurricane" Hannah, who was riding the 125 class in '77 per Team Yamaha's orders. It was also a good return to the U.S. for Jim Pomeroy, who had been toiling on the 250cc FIM Motocross World Championship circuit in Europe for much of his time since 1973 aboard a Bultaco. Now back in the States on a full works Honda, Pomeroy was hoping the 250 Nationals would mark his first professional title, but both Smith and Pomeroy would eventually be overtaken in the points by Suzuki's Tony DiStefano, the reigning two-time AMA 250 National Champion who placed third at the Hangtown opener.

The heavily-favored Hannah's title defense in the 125 Class got off to a rough start when his bike broke at Hangtown, and he did not finish in the points. Instead, it was Suzuki's Danny LaPorte who got the win at the opener. Hannah's 24th on the day was offset by his teammate Broc Glover's problematic day, as he finished eighth. But Hannah, LaPorte, and Glover would battle throughout the summer to come in what would turn out to be one of the most controversial AMA championships of all time.

With Hannah and Glover having off days, it opened the door for Fox Racing-backed Pat Richter and Gary Ogden, who finished second and third, respectively, with Steve Wise and Warren Reid rounding out the top five.

Honda's French prodigy Jean-Michel Bayle was the winner of the second round of the 1988 FIM 125cc World Championship in Genk, Belgium, going 2-1 to top the 1-2 of Holland's Davey Strijbos, the former champion. The American Bob Moore finished fifth aboard his KTM and held on to third in the standings behind Bayle and Strijbos.

At the NMA World Mini Grand Prix in Las Vegas, Kawasaki Team Green's Joel Albrecht, the brother of current Yoshimura/JGR team manager Jeremy Albrecht, used a finish-line pass on Brian Swink in the last moto of the Kawasaki Race of Champions to eke out the win over Buddy Antunez by one point. Other standouts in the weekend race included Damon Bradshaw, Ricky Carmichael, Kyle Lewis, Robbie Reynard, Jeff Dement, and Billy Felts.

Jeremy McGrath won the Pontiac Supercross, which was by that point a single round of AMA Supercross and not a doubleheader. The Yamaha factory pilot—and, at that point, five-time series champion—was followed by Honda's Ezra Lusk and Suzuki's Robbie Reynard. The win marked Jeremy's fifth in a row.

Winning the 125 class was FMF Honda rider Brock Sellards, while series points leader and rookie sensation Ernesto Fonseca finished second on his Yamaha of Troy-backed YZ125, marking his first loss as a professional after winning his first four races in a row—a record that stands to this day. Pro Circuit Kawasaki's Nick Wey, a Michigan native, was a popular third at his hometown race.