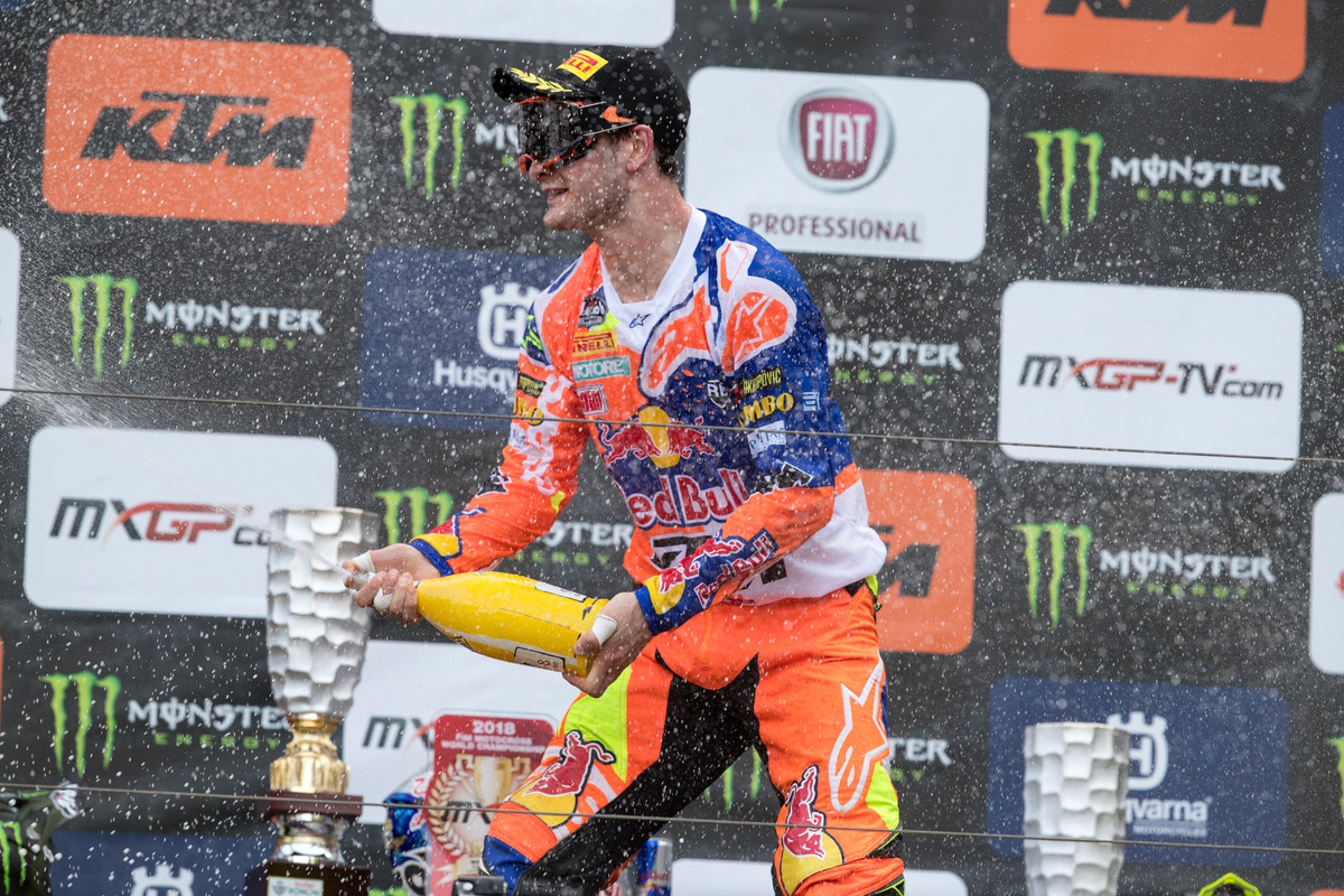 GP Report 5 Things We Learned at the MXGP of Trentino

Round four of 20 and the first hard-pack test for MXGP this year: the Grand Prix of Trentino provided another curious episode in the Cairoli-Herlings duel and provided the USA with their first checkered flag of the campaign, thanks to a resilient Thomas Covington.

Trentino? That’d be the region right on the border with Switzerland and Austria, close to the lapping current of Lake Garda. The Pietramurata circuit is tight, compact, twisty, and—frankly—barely passable as a Grand Prix venue in terms of size and structure, but it is also atmospheric, scenic, and popular among fans who packed the small enclosures to cheer on the MXGP World Champion and 2016 No. 1 Tim Gajser (Slovenia is less than 200 miles to the east). So, what happened under the Italian sun?

This was not in the script. Fresh from his first Grand Prix victory in Spain two weeks prior and returning to the scene of his magnificent 2017 comeback performance with a nationwide Italian network broadcasting the second moto live, Tony Cairoli should have gorged on the spotlight at Arco. The volume level of the home support was dimmed, however, by another orange bike. Jeffrey Herlings had improved on the starts that had nullified his quest for victory in Spain (he was 2-2) and around a course that was frugal at best for overtaking opportunities; he relished the chance to ruin the party.

His 1-1 represented the second double from four in 2018, his fourth win at Piertramurata in all classes and the 70th success of his career at just 23 years of age. “As a rider, you really want to win your home GP—I really want to win in Valkenswaard or Assen—so to come to the ‘Lion’s Den’ where all the Italian fans are cheering and at a track where I don't really like and be dominating all weekend is pretty amazing,” Herlings said, who sported a butt patch saying as much.

“We changed some things on the bike this weekend and we have been trying a lot of different things,” he added on his improved strength from the metal start grate. “We found something to help me, at least this weekend, and I hope it works in the coming weeks.”

Cairoli was resigned in defeat to the third step of the podium. Monster Energy Kawasaki’s Clement Desalle was once again the best of the rest, and his 2-3 pushed the Belgian to runner-up ahead of Cairoli’s 4-2. Part of Tony’s Sunday involved one of the many stones flicking into his front wheel brake system on the first lap of the opening moto. He dropped to 11th place.

“It meant that the wheel was locking quite a lot,” he lamented. “I didn't know if I would have to stop, but it was getting less and less and by lap three I felt the stone was gone and I put on a charge.” Arrival to fourth limited his options for the win, particularly with Herlings getting into the first corner at the forefront of the pack. “It is always me and Jeffrey that push the limit and push the race on, and we pulled away from the rest in the second moto,” Cairoli added.

There were some close moves between the pair in the qualification heat on Saturday, particularly in the first two corners, and Cairoli had a preview of his teammate’s competitiveness as Herlings grabbed his first pole of the year. So, this one continues to run. Ten points split the contenders now and Herlings has the red plate once more, although the Grand Prix of Portugal this coming weekend is another chance to reset.

Is Cairoli too experienced and wise to consider revenge? Herlings will definitely seize a chance to further establish some superiority. A shout-out, also, to the third member of the Red Bull KTM MXGP effort, Glenn Coldenhoff, who seems to permanently exist in the shadows of his decorated teammates. The Dutchman is not renowned for his hard-pack acumen but registered a very respectable top-five classification in Italy.

2. Persistence to pay off?

Clement Desalle admitted the distance from the KTMs is frustrating, but the second-most successful rider in MXGP this decade is also keeping realistic. “In one way, these riders have been at the front for a few years already and they are the ones to beat…but another way to look at it is to not just focus on them,” he said in a Monster Energy article after the Grand Prix. “We have so many races in the season. We will see how their battles go, because I cannot see how things can work so well for 20 GPs. Let’s see.” Desalle is the only rider to have matched anything like the leading consistency of Herlings-Cairoli with three podium finishes. He currently sits 46 points adrift in the standings.

In Italy, he wasn’t given an easy time in the first moto by Monster Energy Yamaha’s Romain Febvre, but the Frenchman fluffed his second race start. Desalle is on the fringes of the void that separates the KTMs from the likes of Febvre, Jeremy Van Horebeek, Coldenhoff, and Gautier Paulin, and the cushion is looking more pronounced with every passing race. The pendulum swing between the KTMs might be gripping viewing, but a change of color would mix up the formative championship table and inject some more confidence into a pack that is otherwise extremely tight.

3. One star down as the other shines

Rockstar Energy Husqvarna’s Thomas Covington produced a remarkable turnaround in Italy. The difference in the 21-year-old’s speed and confidence on those sharp bumps compared to two ineffective MX2 results in Spain a fortnight ago was almost as profound as his first appearance at Pietramurata as a rookie in 2014, where the track had the young American truly baffled. Covington’s 5-1 was a summary of his Grand Prix status thus far: one moto full of attacking excellence, the other frustratingly falling just short of his potential. The day the Alabamian puts two strong charges together could be a breakthrough for both the athlete and the category. In a sense, this classification was the start for Covington’s 2018. His winter knee injury and delay to prep for the season meant he was always looking to play catch-up, and he had the added pressure of watching teammate Thomas Kjer Olsen podium the first three rounds (the Dane had an off-day in eighth place this time).

“The results here in Italy were definitely morale-boosting,” he said, and the manner of his last lap second moto sweep on the superlative Jorge Prado was also invigorating. It was his first checkered flag since the final round of 2017.

While the USA had cause to celebrate, there was also misfortune. Bike it DRT Kawasaki’s Darian Sanayei had tied on points in a bid for a maiden Grand Prix podium two weeks ago in Spain and had the improved conditioning, confidence, and a rapid KX250F to make more of an impression on the category. His season was thrown into doubt with a confirmed ACL rupture in his right knee at a British Championship meet the weekend prior to Trentino. Sanayei sat out Italy and will probably miss Portugal as well, as both he and the team (with whom Zach Osborne made his name in Grand Prix) assess whether he can race on or will have to write-off 2018 with surgery.

4. All change, no change

Red Bull KTM are still unbeaten in both classes of MXGP. Pauls Jonass might have seen his 100-percent record blown away by teammate Jorge Prado (the defending number one was undone by starts and managed just fifth place overall after winning all six of the MX2 motos prior to Trentino), but the 250 SX-F is still ruling the roost, particularly out of the gate where Prado was prolific. Like Herlings, the 16-year-old Spaniard earned his first pole on Saturday (also the first of his career). Of course, Prado had good results previously at the Arco di Trento site. Podiums in EMX125, EMX250, and his maiden MX2 GP success 12 months ago meant that the teenager was one of the favourites prior to the weekend.

His escape was immaculate in the first moto, but he was hunted by Covington in the second. Another rider to begin 2018 far from peak condition, Prado is also warming to the task, and his form in Italy hinted that Jonass will do well to establish another clear-cut winning streak. Afterward, Prado was quick to credit the influence of Cairoli and team manager Claudio de Carli in his swift improvement.

“I am way stronger this year, and in that second moto, I could push until the end. Training with Claudio and Tony gives me that extra when I get to the races. This year I feel good.”

The real yardstick could come next week. In Portugal 2017, Prado buckled in the heat and failed to finish either moto. A repeat seems unlikely. He now needs to chew away at the 39-point gap to the red plate.

5. The rise and fall

Elsewhere in MX2, there were new names coming to the fore—Germany’s Henry Jacobi appearing on the rostrum for the first time—and others dropping away from center stage. Jacobi made good on some recent positive speed that placed the #29 Husky frequently close to the leaders, at least in the initial phases of motos. The 21-year-old has been accused in the past of failing to put in the work necessary to succeed in Grand Prix, but has evidently made progress for 2018 and is armed with a capable motorcycle. His result in Italy came in spite of a tangle with Jonass in the second moto, and he was assisted by lively starts. Getting away from the line in the top five was essential for podium ambitions at Pietramurata.

Italian hopeful Michele Cervellin was also among the top ten after recovering from a knee injury, and Holland’s Davy Pootjes was an eye-catching sixth overall. Perhaps praise can be reserved especially for Russia’s Vsevolod Brylyakov. The Kemea Yamaha man is negotiating his last term of MX2 before he ages out, and his third position in the second moto and fourth place overall brought a huge wave of relief. Last summer, #18 was cast into injury abyss by a shoulder muscle detachment that required complicated surgery and basically ended 2017 before it really begun. Question marks even hung over his career for a while. ‘Seva’s level of satisfaction probably matched that of Prado and Covington on Sunday evening.

On the other side of the scale, MX2 could have waved goodbye to the title possibilities for GEICO Honda-bound Hunter Lawrence. The Australian broke a bone in his right hand in a Saturday crash, and the ailment not only forced him out of the Italian motos, but will almost certainly banish him from round five in Portugal in a few days time.