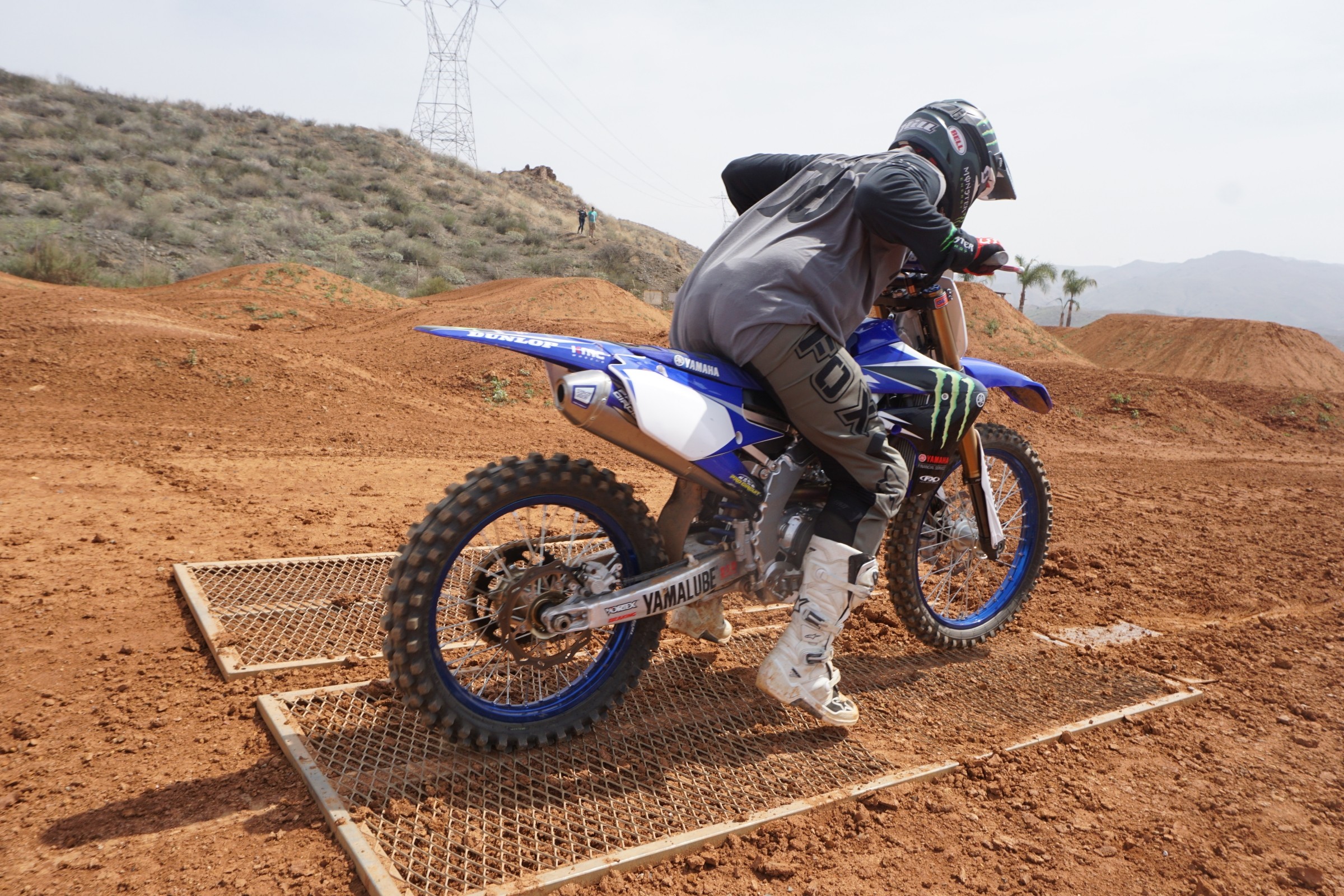 “I’m not doing this to re-spark a career or anything like that, I’m just really happy to get this great opportunity with Yamaha,” Josh Hill, out of retirement and ready to line up for the Monster Energy/Factory Yamaha team this Saturday night inside CenturyLink Field in Seattle, Washington, said. The last time Hill raced a Yamaha was in the sand and grass of Daytona International Speedway in March 2015, but the Oregon native had his event cut short when he suffered a gnarly crash during practice.

Now, basically three years later, he was up at the Yamaha test track on a Wednesday morning in Corona, California, putting in laps and practicing starts with longtime tuner and Yamaha technician Shane Drew. Set to race the bike of the absent Justin Barcia this Saturday, it makes for a cool and unique storyline this late in the 2018 Monster Energy Supercross season. In something of a mixed state of excitement and disbelief, 28-year-old Hill was more than ready to put his Alpinestars boot toe on the line.

Racer X was present, so get a read on just how things were going for the 2008 Minneapolis 450SX main event winner.

Racer X: What’s your mindset right now?
Josh Hill: I think I’m just more excited than anything right now. There is not really a whole lot of pressure being put on me at all for this event. I only had about two weeks to get ready for it. I was going to do the Seattle race out of my own truck and with my own bike, but I was lucky enough to have the guys at Yamaha give me a call. Unfortunately, [Justin] Barcia is not going to be back for this weekend and they needed somebody to fill in, so I lucked into that situation.

How did you find out about the Yamaha ride?
I was up at the final Snow Bike National up in Tahoe and had a bunch of missed calls from a number that looked familiar, and I called it back and it was Keith McCarty. He asked me what I was doing and just kind of felt out the situation a little bit. I told him I had a bike over at Pro Circuit which Mitch Payton had built up for me for Seattle. I had no contractual obligations or anything. It was just something to do for fun.

Have you spoken with Cooper Webb or Justin Barcia at all? Have they helped you out with anything?
I haven’t talked to those guys about any settings or anything. It’s been such a rush here and those guys are out testing outdoors. I think Cooper has actually been back in North Carolina, so I haven’t been able to ride with any of them. And Barcia’s just getting back into it on the outdoors. Yeah, I haven’t gotten to ride with them or get any feedback from them, but the bike, just after one day of suspension testing, I’m in love with the bike. It feels really good.

Is this bike radically different from the last time you raced the YZ450F?
I’m actually really impressed with how much better the bike is than when I rode it in 2015. I want one now! I want one in my garage now. It’s really good.

Ryan Villopoto mentioned to me last week out at Cahuilla Creek that he also loved the YZ450F.
Yeah, I’m blown away. You can tell when you first sit on it that the bike is way skinnier, but they made some changes and I think they really targeted all the little issues people were having with the bikes as far as previous models. I raced a Yamaha in the [AMA National] Snow Bike Championship and I loved it, but I never rode it with wheels.

Yeah, last time I checked, you need wheels in motocross. Any of that snow bike stuff cross over into the supercross you’re now doing again?
It’s different. I mean, it’s good for riding—anytime you’re riding a motorcycle of any kind for extended periods of time trying to go fast, I think it’s good. I don’t think racing snow bikes is going to help me out much on the supercross track.

I just watched you ride on and off for the past hour or so and you look smooth and comfortable. Shane told me you’re going really well.
I’m just kind of focused on myself, really. I haven’t tried to compare myself to anybody else. I’ve seen [Aaron] Plessinger and the Star [Racing Yamaha] guys ride out here and they’re blazing fast. I don’t know where I stack up with those guys. I purposely didn’t pull out a stopwatch because they look so fast. I didn’t want to hurt my own feelings. The last couple of days I’ve spent out here, I’ve been more on my own and I’ve felt a lot better and felt a lot more comfortable. I also think all of my muscle memory is coming back into play. I’m starting to breathe in the right places and kind of relax; I’m starting to feel more like a…. The first couple of days on the bike I felt like an out-of-shape freerider that could go hit the jumps but wasn’t really putting it all together very good.

Do you have 20-plus laps in you?
I’m definitely going to do the laps—I’m not pulling off the track, that’s for sure. I had 15 really good ones in me today. They were all real close on times to my best time, so I was pretty happy with that. A race situation is totally different.

You’re a racer’s racer; you’ll rise to the occasion.
I’m just going to have to remember the same thing I told my brother every time, “It’s just 20 minutes. Work your butt off for 20 minutes and you make all this money.” [Laughs]

Speaking of your brother, what’s he make of all this?
I think he’s excited for me; my brother always likes seeing me do good. Also, he’s probably pumped because he can give me a hard time because, basically, the last three years I’ve just been at the races critiquing him and giving him a hard time and asking him what his problem is. Now he’ll probably be able to give me some crap.

Are you still working for Monster Energy?
I was lucky enough that when I had a big injury that Monster offered me a job and kept me in the industry and kept me around motorcycles. In that period of time, I was going to some of the shoots and some of that stuff and just kind of having fun and taking the guys out. I still kind of had some skill and was able to do some big jumps and stuff and those took notice. They also noticed what I was doing on the Alta and doing some European Supercross races, and they asked me if I wanted to get back to racing. I’m totally blessed to work for a company where they were like, “Hey, do you feel like doing this?” They gave me a cool opportunity to where I can get back on the bike. Two-and-a-half years in the office and I was just getting to a point where I felt like I was starting to lose my little edge that I had on riding that I felt I had. I was excited to have this opportunity. Yeah, I’m still with Monster, but I’m no longer an employee over there.

What’s your master plan and goal for Seattle? Be honest: What can you do?
I have no idea. I’m just going to go there and have a good time; I’m going to rub elbows with my old buddies. It’s going to be fun to get out there and rub elbows and race around and battle with some guys. You totally miss that adrenaline rush of being on a gate with 20 guys and battling.

Yeah, Stefan Everts had told me the biggest thing he missed about racing were the crazy highs and lows that come with it. What do you think about that?
Everything else is kind of boring compared to lining up on a gate with 22 guys that are not out to hurt you, but they’re definitely not out there to be nice to you. It’s fun. I’m really looking forward to Saturday.

What if it rains?
I’ve always been good in the rain. The rain may help me more than it will hurt me because it’s going to throw everybody off. It should be good.