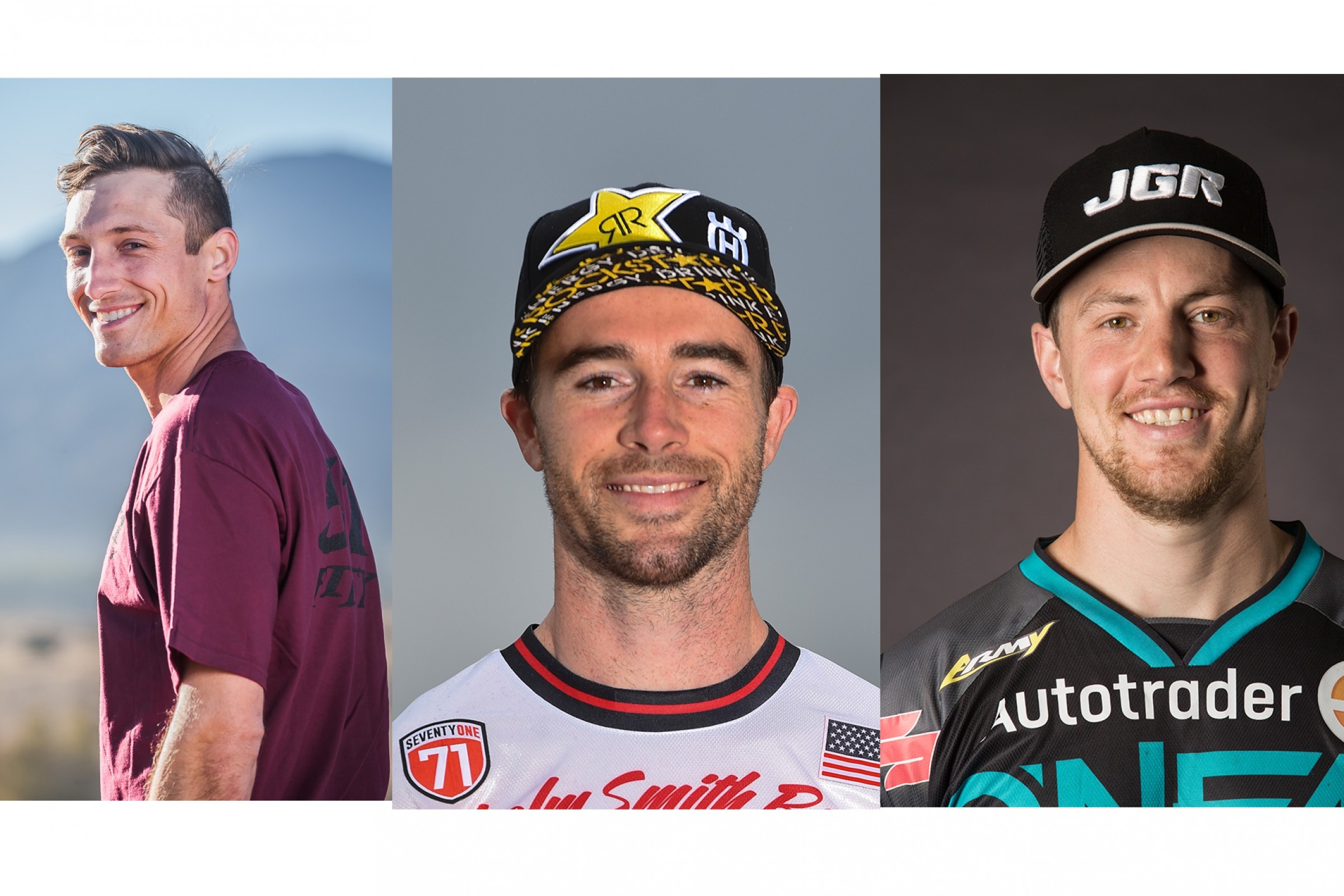 3 on 3 Questions from Indianapolis

1. Did things seem gnarlier, having East and West riders out there?

Ryan Sipes: For sure. Instead of having five or six really fast guys, you now have 12 or 15 really fast guys. Maybe you're used to being fifth fastest in practice, now you're qualifying tenth instead. And when you get a bad start, it’s a whole different animal. Where normally you can start tenth but move into the top five pretty quickly, at a Shootout [250SX East/West Showdown] that ninth place guy is pretty dagum fast and a lot harder to pass. For me, the Shootouts were a lot of fun. You get to race different guys than normal, which is always cool, and the energy around this kind of race is palpable. Everybody wants to show that their coast is faster and that they, as individuals, can beat the best of the best. And if you do well, there’s a little more clout behind the result with sponsors than it is with a regular race. Listen, I may be biased because I won one (uh huh, Vegas 2011), but I think these Shootouts are awesome. They should definitely think about adding one or two more next year. (Note: I’m really not that narcissistic. Just re-living my glory days.)

Phil Nicoletti: Things did seem a little bit gnarlier. Obviously, there are championship battles going on between each coast. The talent pool was much deeper than just having an East or West race. It also makes the heat races more crucial because they acted a main event for just a gate pick.

Kyle Chisholm: Yes, the race was definitely gnarlier having all of the East and West riders together. The field is twice as deep as it normally is for the 250 class. There are so many good factory riders in the race and a lot of fast guys. If my math is correct, there were 15 factory bikes in the main event, and when you consider a few guys are out hurt, that shows you how stacked it is. When there are that many good guys in the race at the same time, it’s like you are always in a battle for your life the entire race! Normally when it’s just East or West, you have the top-tier guys kind of break away, then the next tier guys rounding out the top ten or so, and then kind of a third tier after that. You race around a lot of the same guys each week and kind of know where you stand and you settle in more. In an East/West, you just battle it out, start to finish. I actually really like it, and it’s fun to battle with some new guys and see where everyone is at.

2. What sections of the track really changed as the race went on?

Sipes: That track looked gnarly. By the end of the 450 main, the top three dudes weren’t even tripling in the rhythms anymore. The section before the finish line where they tripled onto that table with the kicker, that looked pretty tough toward the end. And the section after the start straight. All day leading up to the 450 main, the fastest line was go inside, double, hit the tabletop and go over the next two smaller jumps, then triple out. The rhythm was decently fast, and since you were going inside in the corner before, you didn’t leave the door open for a block pass. But by the middle of the 450 main event, the face of the table was so rutted out it was making it tough to do that line. So then you saw Moose [Marvin Musquin] and [Jason] Anderson doing a cool line where they tripled up onto the table, over all the bad ruts on the face of it. They had to swing wide to do it, which leaves room for someone to get inside, but it meant getting over the bad ruts and not risking a crash.

Nicoletti: The sections on the track that changed the most were the rhythms after the start straight and before the finish line. The Dirt Wurx crew did really well at maintaining those sections all day. Before the 250 main event, they fixed both those sections, but then by the second lap of the main, it was like it hadn’t been touched all day. The second lap! The face of the dragon’s back was really built for Pastrana to backflip off of. The face was completely inverted, with really deep ruts.

Chisholm: The entire track changed quite a bit throughout the race. We did 21 laps in the 250 main event! When you do that many laps, you’re hitting the obstacles over and over so many times, so it deteriorates a lot. The dirt was very soft and sticky like it often is in Indianapolis, so it got pretty nasty. But I would say the two long rhythm sections (before the finish line and after the first turn) got the toughest. Most everyone was doing the same rhythms through both sections, so we were all landing in the same transitions through both sections. When that happens, it gets rutted up quick in between those jumps. Sometimes you can switch up your rhythm so you get in the opposite transitions and have some fresh track, but this weekend it was too slow to do that, so you had to stick to the main rhythms. It made it really tough and sketchy to nail the jumps consistently through the whole race, especially the second half as it got deeper and deeper. You really had to use the whole track. Sometimes I was so close to the Tuff Blox using every inch of the track. You had to really be looking ahead to pick which rut you were going to want to be in and have really good balance in the ruts. Balance is very important when the whoops get that long rut through them and you need to stay in it, and it’s also important to be looking at the rut up ahead of you where you want to go and not staring at your front fender.

Sipes: I think it does. When the West Coast goes on break, the teams have those riders start testing for Lucas Oil Pro Motocross, and that’s a whole different style of riding. Tracks are different, bike setups are different, even the training is different. But the East Coast guys have been on a supercross track three to four days a week for a month straight coming into this event, so I think it favors them a little. It can be hard to switch gears like that in the middle of a season.

Nicoletti: I feel like there was a bit of difference between having the break versus racing multiple weeks in a row. Having two weeks off is one thing, but after some point you lose the feel of racing a bit, I believe. Obviously, I’m speaking for only myself, but nothing simulates racing. When you get out of the flow for a certain amount of weeks, it has a bit of downfall.

Chisholm: Yeah, I think it matters whether you came off a break or off of a race the weekend before. At least for me, I always like to get some momentum going and keep racing because it helps me to steadily improve each week. You get in that race mode, and you just get comfortable so quick when you do it week after week. When you come off of a break like the West guys did, it’s a double-edged sword. You’re fresh because you’ve had some time off from all of the traveling and tedious things that go with racing every week, and you’ve had some time to work on some things, whether it be your bike or yourself. But nothing really replicates racing like actual racing, so sometimes your race craft or starts or just the intensity of racing with everyone can throw you off a little bit when it’s been a month or two since you’ve done it. So, I think it’s a little bit of an advantage for the East guys since they’re in the middle of their season. Plus, they just raced St. Louis the weekend before, which was similar conditions and a similar track, so their bike setups might be a little more dialed in for those conditions. They were quite a bit different than what the West Coast tracks have been. But when it comes down to it, it’s the same track for everyone and we’re all professionals, so you better be able to adapt and race your best, because with that many good riders, you have to be on your game.