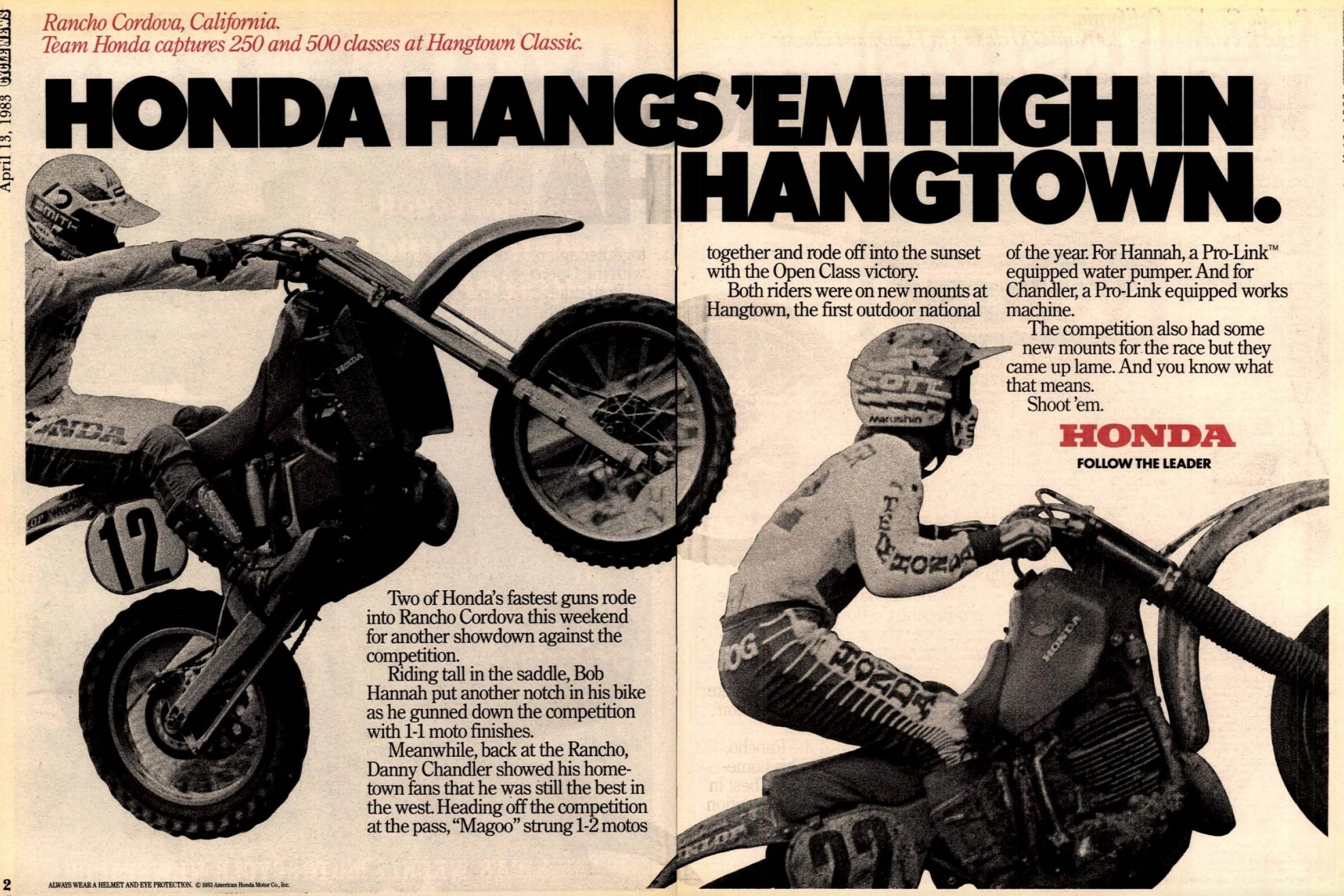 On This Day in Moto March 27

The Hangtown National was the second round of the AMA Motocross Championship, and Team Honda's Rick Johnson started out with a win in the 250 Class over Kawasaki's Jeff Ward and Yamaha's Broc Glover and Jeff Stanton.

The 125 Class winner was Team Suzuki's Erik Kehoe, who topped his former teammate George Holland, who was now with Honda, and young Suzuki riders Ronnie Tichenor and Donny Schmit.

Hangtown kicked off the 1983 AMA Motocross Championship in a year when three classes competed on the same day: 125, 250, and 500. In a stacked 125 Class, reigning three-time champ Mark "Bomber" Barnett took the opening round win over Kawasaki's Jeff Ward and Honda's Johnny O'Mara (and further back, Ron Lechien was making his outdoor debut for Yamaha, finishing ninth).

The 250 Class was also stacked, and it belonged to Team Honda newcomer Bob "Hurricane" Hannah over Yamaha's Rick Johnson and his Honda teammate David Bailey. And in the 500 Class, local hero Danny "Magoo" Chandler put his CR500 in the winner's circle over Kawasaki's Kent Howerton and Honda teammate Goat Breker. (Yamaha's Broc Glover went 12-1 for fifth overall after getting stuck in the mud and then seizing his motor trying to get out of it.)

Here's a cool video that Honda produced on that whole season.

Also in 1983, American rider Jim Gibson decided to go spend the season in Europe on the Yamaha factory team, hoping to become the first American to claim a FIM125cc Motocross World Championship. "Gentleman" Jim started out strong with a second in the opener behind Suzuki's Eric Geboers in Best, Holland.

Monster Energy Kawasaki’s Ryan Villopoto picked up his sixth win of the 2010 season at round 12 of AMA Supercross in Jacksonville. RV was dominant in a nearly six-second win over title rival Ryan Dungey. Trey Canard, who had moved up to the 450 class just a few races earlier, finished third for his fifth straight podium in just six races.

In the Lites class, Christophe Pourcel took his fourth win in six rounds of the East Region to extend his points lead over Austin Stroupe, who finished second. Brett Metcalfe took home third.

Jeremy McGrath’s dominant 1999 season continued with a win in St. Louis over Mike LaRocco and Mickael Pichon. It was McGrath’s six win of the year.