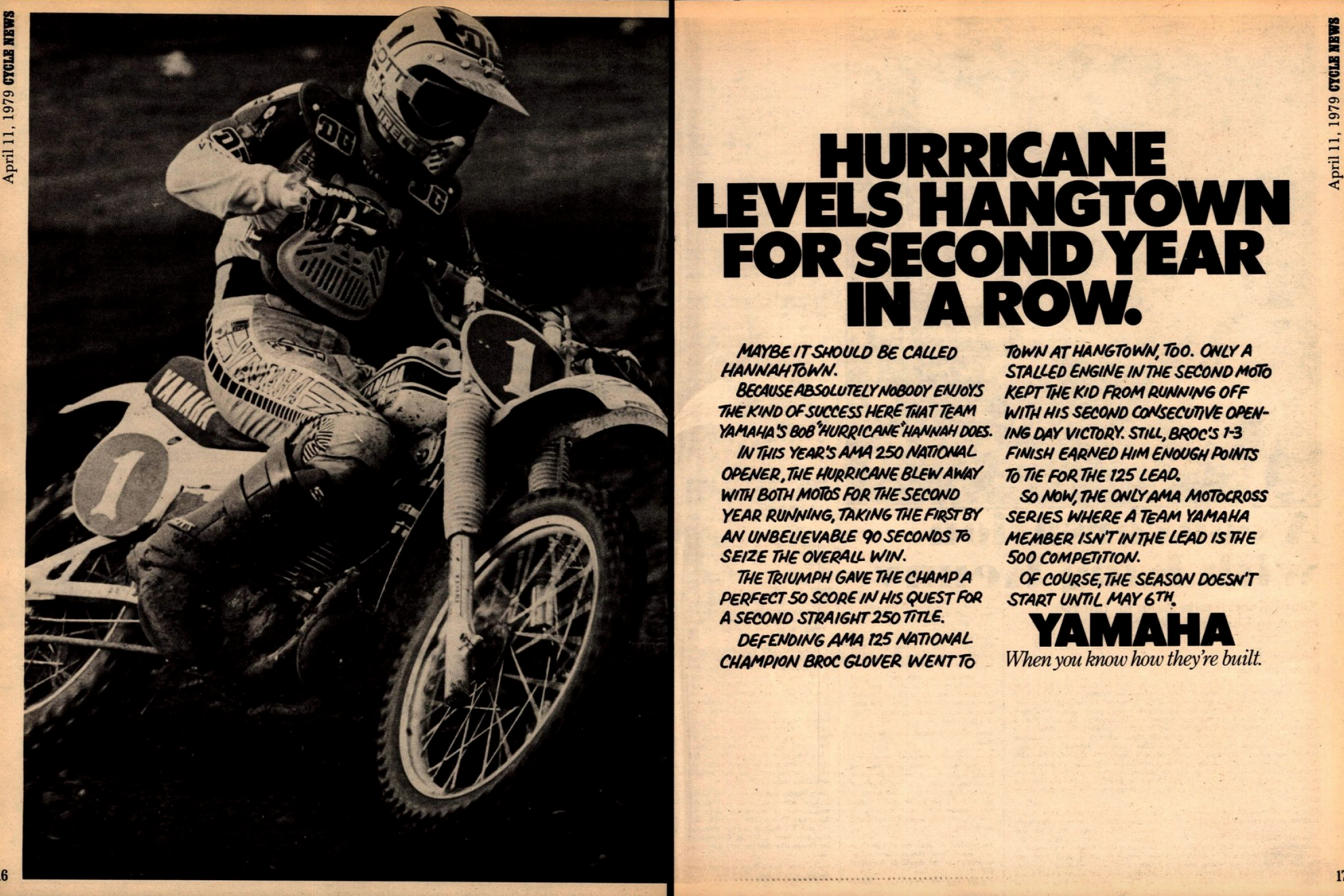 On This Day in Moto March 25

The 1979 AMA Motocross season began at Hangtown under a cloud of controversy, as various privateers were said to be ready to claim one of the works bikes that the factory teams were all using.  Also, Hangtown was at a new venue, as the sandy track in Plymouth was replaced by a much harder-pack Prairie City Off-Highway Recreational Vehicle park. Yamaha's Bob "Hurricane" Hannah once again led the way in the 250 Class over his friendly rival Marty Tripes of Team Honda and Suzuki riders Kent Howerton and Jeff Jennings.

In the 125 Class, in only his third AMA National, Team Suzuki's Brian Myerscough got the win over two-time class champion Broc Glover of Team Yamaha and his Suzuki teammate Mark Barnett. And in his debut as Kawasaki's 125cc hopeful, Jeff Ward placed fourth on the brand new Kawasaki KX125R Uni-Trak prototype.

After the race, a privateer Maico rider from Chino named John Roeder approached the AMA referee for a cashier's check for $3,500, the going rate to claim a bike, and said he wanted to claim Marty Tripes' works Honda RC250. The four factory team managers immediately produced their own cashier's checks that they had been carrying around just in case and put up their own claims for Tripes' bike, with the understanding that if they won it, they would return it to Team Honda. The AMA referee Butch Lee put together a drawing, and the claimant who drew the lowest number would get the bike. Roeder reached in first and pulled out the number one. Just like that, the bike was his. Why? He wanted to prove a point that the Japanese factories had unfair advantages over everyone else.

Honda's Gunnar Lindstrom would argue that the bike wasn't worth the $100,000 it was rumored to be worth, but nonetheless, the teams were all disappointed about the claiming rule and basically forced the AMA in the days that followed to remove the rule, which they did. Honda never bought the bike back from Roeder, and it would never be raced again on the AMA circuit. Cycle magazine did get their hands on it and took it apart piece by piece to see what was inside and on the bike, and then it went into a strange afterlife as the ultimate motocross bike collector's item. Here's what it looks like now.

James Stewart won the Detroit Supercross at Ford Field over Suzuki's Ricky Carmichael and Yamaha's Chad Reed as the three kept slugging it out in one of the most exciting series in AMA Supercross history.

Minneapolis was a nightmare for 125 West Region series points leader David Pingree, as he damaged his front wheel in an early crash and could only manage a 15th place. Pro Circuit Kawasaki's Shae Bentley won ahead of Motoworld Yamaha rider Greg Schnell and Amsoil Honda rider Chris Gosselaar.

At the Tampa Supercross, Team Kawasaki's Jeff Ward, the former two-time AMA Supercross Champion, got his first win of the season. Suzuki's Johnny O'Mara placed second ahead of Ward's teammate Ron Lechien. Series point leader Jeff Stanton suffered his first misfortune of the season when his transmission broke early in the main event, forcing him to DNF.