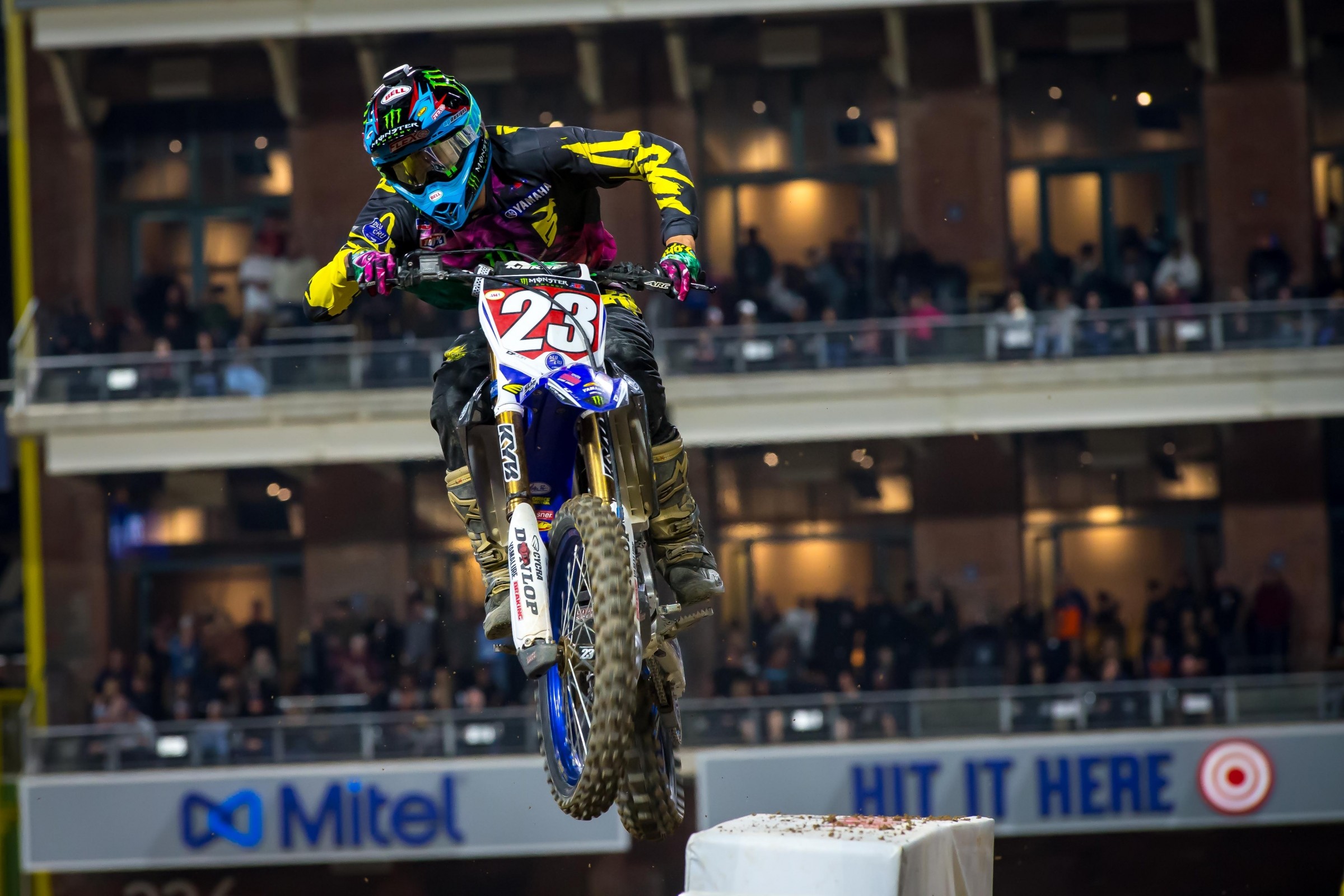 Formerly, we had to wait until the end of the year to see how the East Region stacked up against the West, and up until just a few years ago, even that race, exciting as it was, didn’t count for points. Well, this year East meets West twice, and in Indy it’s still in the middle of the season for both regions. In other words, guys on both coasts are still scrapping hard for points. With much more than just pride on the line, this Showdown should be one for the ages. —Aaron Hansel

Last weekend Zach Osborne put eight points on Austin Forkner, his closest competitor, but now Forkner has a chance to get some of those points back in Indianapolis. Under normal circumstances, it’s unlikely Osborne would surrender a large chunk of points, but you never know what might happen in the Showdown. If Forkner can get the win, Osborne is going to have to contend with West riders like Aaron Plessinger, Joey Savatgy, Shane McElrath, Adam Cianciarulo, Justin Hill, and more in order to limit the damage. Of course, it could just as easily go the other way in Osborne’s favor! —Hansel

Just like the East Region, there’s a pretty tight points battle out West, with Plessinger leading Savatgy by just four points. And with East Region stars like Osborne, Forkner, Jordon Smith, Jeremy Martin, and more all joining the fray, we could be looking at a big shakeup in the standings. It could be just what Shane McElrath and Adam Cianciarulo need to inject some energy into their championship hopes. McElrath is sixteen down on Plessinger and Cianciarulo trails the leader by seventeen points, but if he can use the Showdown to close that gap by even ten points, it’d be huge for his title aspirations. —Hansel

Cycle Trader/Rock River Yamaha rookie Brandon Hartranft is 11th in points, but he’s been riding much better than that. After getting docked 11 positions in Arlington (he gained positions after being forced off the track), he crashed on the final turn of the LCQ the following week and failed to make the main. But since then, he’s been great, going 9-8-6 at the last three rounds, respectively. Things won’t be easy for him with so much additional talent in the class this weekend, but it’s going to be interesting to see where he stacks up in Indy. —Hansel

Weston Peick started the year out great, nabbing fifth place at each of the first three rounds. Since then, he’s slid slightly and he had a crazy crash in Atlanta during practice, which hurt him there and in Daytona. Last week in St. Louis he appeared to be back in form, taking yet another fifth place after a hard-fought battle with Blake Baggett. Is Peick ready to start battling toward the front again? We’ll see when the gate drops this weekend. —Hansel

After stepping away from the sport at the end of the 2014 Monster Energy AMA Supercross season to focus on other things—his budding music career, school, and even contributing to Racer X Illustrated—Blake Wharton is back, people! The three-time 250SX race winner was originally slated to run the East Region with help from Munn Racing, but due a preseason injury, he missed the first few rounds. Wharton then got a call to fill in at IB Corp Racing in the West Region, which, of course, is back this weekend for the first of two East/West Showdowns. Some guy named Matthes recently spoke with Wharton about the move to IB Corp and his return. Give it a listen. Anyway, nothing like taking four years off and coming back to face the best riders in 250 supercross in the Showdown. Let’s see how Wharton fares in his return. —Chase Stallo

If you missed it earlier this week, we laid out some mind-boggling stats about Eli Tomac’s dominating performance in St. Louis. One in particular stood out for me: Tomac put in FIVE laps in the 46-second range. No other rider put ONE lap in the 46-second range! When Eli Tomac is on and he gets a holeshot, it can be lights up for the rest of the field—and the fans, because it’s kind of boring. Tomac has been beset by simple mistakes this year, though, including a costly one at Anaheim 1, when he, yes, also holeshot the race and appeared set on making it boring. You never quite know what’s going to happen. We’ll see if he can put together back-to-back performances. —Stallo

Justin Brayton recently turned 34 and is arguably riding the best he ever has in his career. This Cinderella story continues to move past midnight. After winning the first “main event” in Atlanta, Brayton won his first career main event in Daytona and followed it up with a fourth last weekend, along with a heat race victory. Will his hot streak continue? —Stallo

This sport moves fast. In every sense, it’s truly a “what have you done for me lately” mentality. So, you probably forgot that the last time the West Region was in play, Justin Hill won. Oh, and he’s the defending champion. While the West was on break, Hill put in some amazing 450 rides and broke some toes. He’s back down to the 250 this weekend, and while a title defense is a long shot, it will be interesting to see if he can pick up where he left off. —Stallo

Yes, the race is inside, but it’s worth keeping an eye out on a storm scheduled to hit Indy sometime tomorrow. As of Friday morning, the Weather Channel is still calling for 3-5 inches of snow—that’s down from 8-12 earlier this week. It’s going to be cold, windy, and snowy, but expect the fans to show up. I’ve been to Indy when it was 20 degrees and snowing, and the pits were packed! We’ll see how this impacts the teams and their preparations—might some set up temporary indoor pits? Hopefully the weather will hold off and riders won’t be forced to bunker down in the team trucks all day. —Stallo