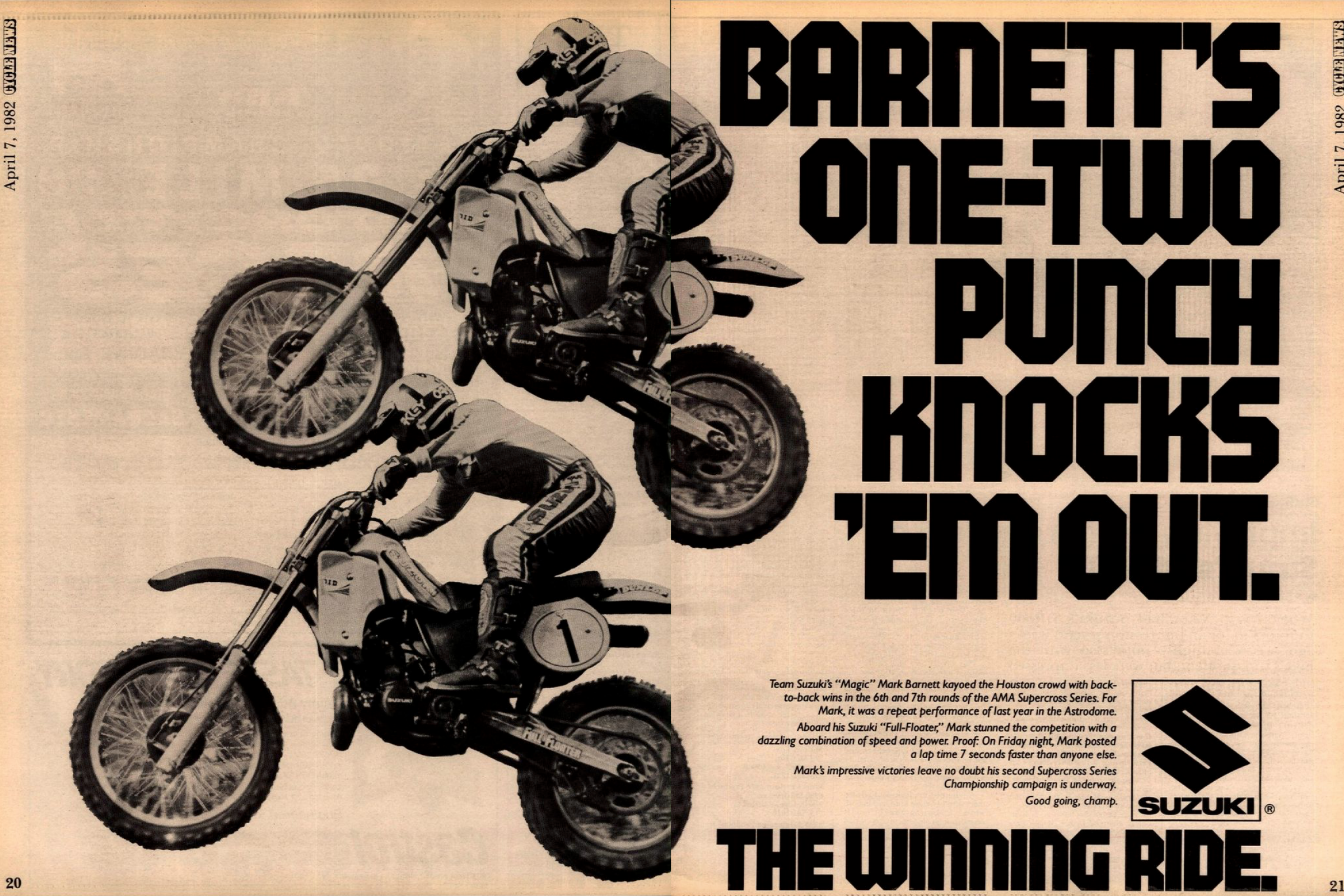 On This Day in Moto March 19

Can-Am's Jimmy Ellis won the second night of the Houston Astrodome doubleheader in front of Team Honda's Jim Pomeroy and Maico rider Gaylon Mosier. Ellis, the one and only rider to ever win an AMA Supercross on a Canadian-made motorcycle, would leave the once-flourishing Can-Am brand at the end of the '77 season, bringing their days as a genuine title contender to a close. The Houston win was the last for the brand in AMA Supercross. Ellis would also give them their last AMA Motocross win on April 17, 1977, at the Hillside Park 250 National near Nashville, Tennessee.

Besides one of the strangest halftime shows ever—a tug-of-war between race mechanics like Keith McCarty and Ron Heben—the opening night of the 1982 Houston Astrodome SX saw defending series champion Mark "Bomber" Barnett get his second win of the season, ahead of Honda's Donnie Hansen and Suzuki factory rider Warren Reid. Barnett would also win the following night's race.

One week after winning the Daytona Supercross, Team Honda's Bob Hannah got another win, this time on the opening night of the Houston Astrodome. It was the fifth time the Hurricane was victorious inside the old home of the Houston Oilers football team. His teammate David Bailey finished second, with Yamaha's Broc Glover and Mike Bell third and fourth.

The big winners at the Indianapolis' RCA Dome Supercross were Team Honda's Jeremy McGrath in the 250 class and Suzuki's Ezra Lusk on the 125. McGrath topped Yamaha-mounted Jeff Emig and Indiana's own Mike LaRocco; Lusk got the better of his teammate Jimmy Button and Kawasaki factory rider Robbie Reynard.

Yamaha factory rider Chad Reed got his second AMA Supercross win in a row, this time at Orlando's Citrus Bowl. Suzuki's Ricky Carmichael finished second, with Kawasaki's James Stewart third in his first race back since breaking his arm in practice in the second round at Phoenix. Stewart was leading and pulling away in what was effectively his first dry race on a 250, but he crashed in the whoops, handing what was shaping up as his first-ever AMA Supercross win. Instead, he would have to wait until the next round.