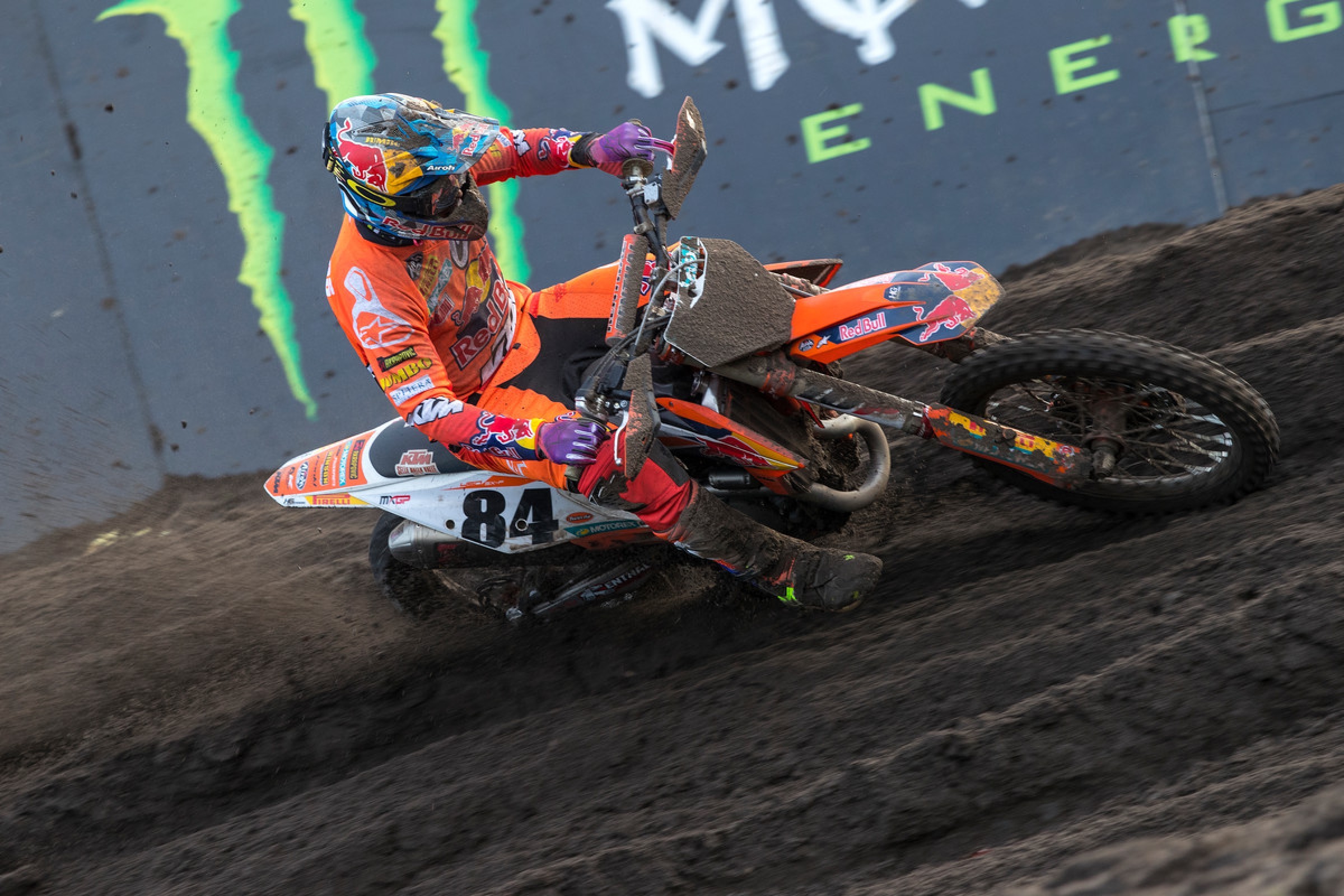 GP Report 5 Key Moments from the Grand Prix of Europe

Round two of the FIM Motocross World Championship almost froze in wet and sub-zero temperatures at the Eurocircuit in Valkenswaard, the Netherlands, as MXGP encountered what is likely to be the last blast of the European winter. The climate could not have been more of a contrast to the sunshine and pleasant climes of Argentina and the season opener two weeks beforehand (and therefore further justified the far-flung escape to begin the racing year). Here’s what we learned from the Dutch fridge.

The paddock encountered terrible conditions on Thursday and Friday with heavy rainfall. The downpours then turned white when temperatures dropped. Remarkably, the Eurocircuit sand and a track that has known Grand Prix motocross for four decades stood up well to the wintery abuse. Part of the reason why Valkenswaard is routinely pegged as one of the first European dates is for the “all-weather” resistance of the terrain. This round of the series has witnessed light snow in previous years, but also basked in near summer conditions with a slot just a few weeks later in the calendar. The adverse effect of the soaking and near-freezing treatment was a soft and lump-laden affair; the water helping what can be a shallow and hard ground at times became extremely bumpy and one-line in places (no rider risking wide line variations for fear of boggy areas).

“I don't know if it is a sand track or a mud track! Good starts were the key and it was difficult to make passes here,” Monster Energy Yamaha’s Jeremy Van Horebeek said after taking a surprise pole position on Saturday when Jeffrey Herlings crashed out of a long lead after mistiming the rhythm section.

Van Horebeek, a Belgian, placed third in the first moto, but a crash and knock to the head produced a zero in the column for the second. Herlings, who was unhurt but had a slight limp after the fall in the qualifying race, explained how the riders (and skeletal crowd on Saturday that was much healthier on Sunday) were dealing with Artic air.

“It is a shame it is so cold and I feel bad for the organization,” said the Valkenswaard legend, who now has eight wins from nine years of racing at the venue. “Our hands are freezing and it is unusual to have this weather in March.”

Teammate Antonio Cairoli also had an opinion. The world champion is from the warm climes of eastern Sicily and lives near Rome, but has also been based in northern Europe since 2004 and is no stranger to the climate. “To ride in cold like this is really hard,” he said. “I come from Sicily but have spent many years in Belgium and even then I haven’t seen weather like this! I cannot say I enjoyed the climate much, and I’m not such a motocross fan on days like this.”

The contrast from Argentina and the first round was stark, and MXGP could bounce to another extreme this week with the new circuit of Red Sands bringing motocross back to Spain.

Jeffrey Herlings now has 69 Grand Prix wins and is two-for-two in 2018. Eight of the grand total has been earned on the Valkenswaard sand-the very first as a raw 15-year-old in 2010. If the Dutchman can boast of having a fortress, then the course that is partially located in a Rally Cross arena is definitely a prime contender. Twelve months ago at the same place, Herlings righted a wayward and injury-affected debut term in MXGP for what was round six of the series with his first premier class podium.

This time, he nearly blew his chances of a first triumph at the circuit on the 450 with the Saturday crash that put him down to 19th in the gate. As in Argentina, Cairoli grabbed both holeshots (he is now four out of four for starts) and Herlings again had to demonstrate boundless energy, zeal, and no shortage of courage to plough a course back to the front. He was assisted by two small tip-offs by the champion, as minor mistakes again proved Cairoli’s undoing as MXGP continues to be a two-horse show.

Despite his handicap in the gate, Herlings’ proficiency in the sand was expected. Even 2015-‘17 Valkenswaard winner (and third-place finisher on the day) Rockstar Energy IceOne Husqvarna’s Gautier Paulin could do little about the charge. Cairoli was expecting the onslaught: “I knew Jeffrey would be very strong here at his home GP and that I’d struggled in Valkenswaard for the last few years.”

The result and another come-from-behind success for Herlings did invite questions: How long can he continue to rally like that? How long can Tony Cairoli set a race-winning pace only to be overhauled? How close to the limit are the teammates pushing?

“We are quite on the limit and it is good for the spectators and the public; I’m really enjoying it at the moment,” Cairoli said.

It is perhaps inevitable that the dispute for speed will narrow and become closer. This is where the cordial dynamic between the two leaders will be tested.

“I like to ride clean,” Herlings stated when prompted for an opinion on the developing rivalry. “The sport is already very dangerous, so I want to keep it clean all the way. Tony is very experienced and very smart and I hope it will be the same from his side.”

In spite of illness, the MX2 world champion was not denied at Valkenswaard for the second year in a row. Pauls Jonass’ 1-1 meant that the Latvian is undefeated in four motos so far this season. Unlike Argentina, where #1 clearly had a speed advantage over his peers, Holland revealed a closer challenge through a fitter and more mature Jorge Prado. The teenager may have gaffed with a mistake down the same hill in qualification (one of just two at Valkenswaard) that would catch out Cairoli on Sunday—and which allowed Thomas Covington to take the heat win—but learned quickly for the motos. The Spaniard pushed Jonass all the way to the flag in the second dash, meaning that Red Bull KTM owned pretty much all the drama in both classes. (Their 16-year-old Austrian prospect, Rene Hofer, in just his second year on a 125 machine, was a dominant force in the opening round of the EMX125 European Championship.)

Jonass’ competitors first have to match the 21-year-old’s starts and then try to contain the combination of flowering momentum and that 2018 250 SX-F power.

“The world title gives some extra confidence but it also takes the pressure away, so you can ride really relaxed,” he said. “At the end of last year I was very careful. This year I am starting from zero and riding very smooth and easy.”

Austrian technology filled the first five spots of MX2. 114 Motorsports’ Hunter Lawrence managed sixth place and the Australian is already staring at a 33-point gap to Jonass in the standings. Credit to Belgian rookie Kemea Yamaha’s Jago Geerts, who used his familiarity with the sand to take seventh overall.

The Grand Prix of Argentina was a mitigated disaster for HRC with no presence whatsoever in the MXGP division. There was some relief in Holland with the return of Tim Gajser after recovering from a broken jaw, and Brian Bogers was also walking around the paddock, having buried a horrid winter recuperating from a badly crunched right foot. The Dutch rookie only started riding the CRF450F the previous week and admitted that the Grand Prix of Portugal and round five of the competition might be too much of a push to resume racing. Russia, and the sixth event of the year on May 1, was identified as a more realistic date.

Gajser showed good form in the first moto and briefly showed top three potential before lodging a 9-13. He lost control in the long waves section and was pitched off the Honda in the second outing; the Slovenian’s spill was easily recognizable afterwards thanks to Fox’s magnetic helmet peak doing its job and dislodging.

“I made two good starts but made quite a few mistakes that cost me a lot of time, but I’m happy that I finished both races—and that I didn’t get hurt,” the 2016 champion said.

MXGP could use a Gajser on fit-and-firing form to try and interrupt the Red Bull KTM monopoly. The collective of Paulin, Monster Energy Yamaha’s Romain Febvre, IceOne’s Max Anstie, and Monster Energy Kawasaki’s Clement Desalle continue to hover adrift the speed and level of #222 and #84.

Thomas Covington’s plight to near the front of MX2 took another forward step in Holland. The American has been on the back foot after a delayed winter period of work in the wake of knee surgery, but a pole position on Saturday and fifth overall in the sand—the Rockstar Energy Husqvarna rider showing his aptitude and experience of countless motos and laps in the soft stuff courtesy of his residence close-by—was a confidence booster.

“I just wanted to get my feeling back and we have the bike working well,” he said on Saturday after a slightly deflated opener in Argentina. “I am happy with the progress made during the last couple of weeks. The plan is to keep working and keep putting the same amount of effort,” he added.

Fortunately for Covington, he has a handy marker for progress in the same awning. Thomas Kjer Olsen was third overall for the second time in a row (equalling the trophy haul of his rookie term in 2017 already). The tall Dane is a former EMX250 Champion and is one of the strongest prospects in the category, if not all of MXGP.