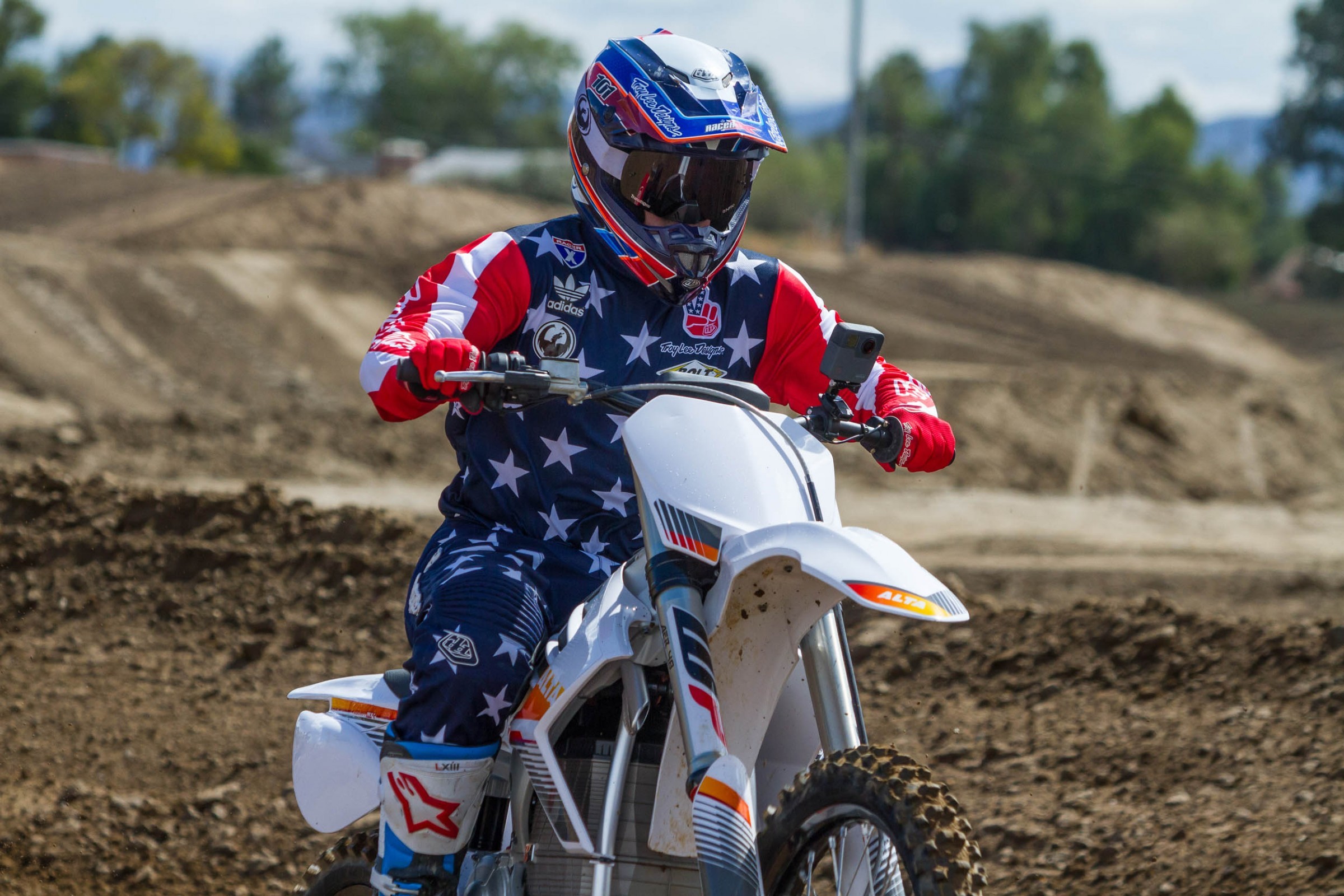 Bench Racing Ammo Q&A With Ping on the 2018 Altas

We recently had the chance to test the Alta Motors 2018 Redshift MX and Redshift MXR at Perris Raceway. Since releasing the video, we've had a ton of additional questions regarding the electric models. So, we decided to do a Q&A with David Pingree where you asked him anything you wanted regarding the bikes. Here are his responses.

The one thing you didn't really address is the weight. I know a lot of reviewers have mentioned it's not a big deal for handling, but I'd imagine it has to work the body over a 20-30 minute moto a bit more than say a 225lb 450. Thoughts on that? Also, how difficult is it to swap the battery if you can't charge in the pits?

While the weight of the MXR is a little heavier than a 450, it doesn’t feel like it. Consider how much the rotating mass of a four-stroke engine contributes to the “heavy” feel it has. There is none of that in these bikes. The main place you feel how nimble this thing is would be when you are cornering. The Alta rolls right into turns like a 125 two-stroke. Lifting it on the stand is another story, but you don’t feel the weight while riding it.

Battery swaps are not recommended by Alta. That was one of the first questions I asked because the run/charge time is the biggest hang-up for me right now. They explained that the battery is sealed and not exactly easy to change out. The main thing is that dust or moisture inside the connectors or battery during a swap would be a big problem.

I think most of us agree that these electric bikes are really coming along and have great potential. My question for you is where do you see electric bikes fitting into professional racing? In its own class? Alongside the thumpers? Arenacross only? Indoor supermotos? One more quick question: What’s the vibration like on those things?

This is yet to be determined. I asked about the homologation process and they are getting pushback from all the other manufacturers and the AMA is very slow to give answers. The AMA realizes the miscalculation of the four-stroke rules and they don’t want to make that mistake again. Right now they are allowing them to race in an Open class. For example, if I wanted to race it at Loretta Lynn’s in the 30-plus class, I could. That means it has to compete with 450s, and Alta designed the motor to compete with a 250F. They even assured the AMA they could include limits in the firmware that would put a cap on horsepower, but the AMA is still stalling. Time will tell. I believe it should be allowed in the 250 class, but I’m not sure how you classify it. You can’t use cubic centimeters, so what is it? Those are hurdles they will have to get over. Expect to see it in random events initially, which is probably a good thing for Alta, to be honest. They still have some work to do in order to compete at an elite level, and races like Mammoth, Red Bull Straight Rhythm, Monster Energy Cup, etc., will give them time. I also think this could be a huge market for indoor facilities because you can take ventilation out of the equation.

There is literally no vibration on this bike. None.

Do I really need to answer this? The lack of maintenance is a massive upside to going electric.

Watching the video, what stands out to me is how loud the chain-slap is. How annoying is the chain noise while you’re riding?

Like riding a Yamaha with the reverse engine for the first time, the sounds take a while to get used to. I kept hearing mud hit the fenders and thinking something was broken. The loudest sound is the noise from the tires, and it is very odd at first. You hear the chain a little, but it is drowned out by the tire noise. After a couple short motos, it all just fades away and becomes normal.

It looks like the rear subframe is either completely made from plastic or encased in plastic. Has Alta had anyone snap the rear subframe? If so, how costly was the replacement part? The reason for asking is I had a Husky that the insurance company totaled instead of fixing because of a snapped subframe. Vital MX talked about engine braking or power on landings, but how are the ergos? Seat to footpeg? Reach to the bars? Which major competitor's bike does the ergonomic layout feel most similar to? I'd really like to own one of these as a second or third bike, but I'm not a dentist, so money needs keep me scrapping.

There isn’t actually a subframe at all. The composite piece that comes up to support the seat and fender is somewhat flexible, but I’m sure it would break if hit just right. I didn’t hear of a replacement cost. The engine braking was less than a four-stroke but slightly more than a two-stroke. It was a very comfortable and natural engine braking that stayed neutral and balanced off jumps and entering turns. The rider triangle was incredibly comfortable as well. It feels a little smaller than other bikes, but the cockpit is roomy and well laid-out. I would suggest it feels much like a Honda or Suzuki 250F in terms of gas bike comparison.

Has Alta addressed the sound issue? Mixing them with ICE bikes is dangerous. Speaker with an engine sound, maybe, or customizable like a yelling person, Van Halen’s “Eruption” solo on an endless loop, Star Wars lightsaber sounds? Endless possibilities. It’s a problem, though. I’ve been on a track with them and you don’t know they are there. Sneaky turds.

It was brought up and they said it is being considered. Over tacos at lunch, some buddies and I considered starting an app that would let you download any sound you wanted and then pipe it into the bike. There are actually performance cars that are currently doing this. Making a quiet vehicle is great until you can’t hear the sound of the burly V8 you paid so much money for. Anyway, we came up with everything from two-stroke sounds to a blue whale giving birth as possible sounds as you rolled on the throttle on your Alta. Like splitting lanes in traffic, sound can be a safety issue and it is something that will need to be addressed as time goes on.

When the battery charge is nearing its end, is it noticeable? I.e. Does it become less responsive and more sluggish, or start to lose power similar to how any battery-powered RC toy loses everything in the last ten or so minutes of its cycle, near the end of its charge? Or do you get a warning light saying it’s near the end, or how does that work?

And as a casual weekend rider who mostly rides desert, jumps, and a bit of motocross (currently riding and stoked on a '17 YZ250 two-stroke) what would be the pros and cons of riding an Alta? THANKS!!

That was the case with the base model, but the problem was fixed with the battery and connector upgrades to the MXR. The power literally stayed the same until the battery was dead.

The pros are less maintenance, immediate torque at zero RPM, quiet riding could open up new riding areas, easy power curve changes via a phone app, and ease of riding. The cons are limited battery life, limited range versus gas engines, battery recharge time, still relying on gasoline-powered generators to recharge battery at the track, difficulty of battery change, unknown cost of replacement motors if there is a problem, and other unknowns about the platform. Many of these questions and issues will be answered over time.

What's the risk, if any, at the spray wash? Do they hold up well to a tip-over or full endo? Can they come with a 12V aux port for charging up my iPhone?

The entire motor, battery, and wiring are completely sealed, so there is no risk of shock or water damage. The bike holds up as well as any other to tip-overs and small crashes. Fortunately I haven’t had or seen a big crash on one of these, but I’m sure the body would work similar to current bikes. No 12V ports at this time.

I look forward to the day when I can own one of these, as the smooth and plentiful torque will help me as a rider. The big problem is the infrastructure at all of the tracks and the need for all the charging stations that will have to be in place so we can charge our batteries. Any idea who will be footing the bill for all of these electrical stations?

Right now it looks like just generators, and owners will be on their own for those. This could change over time, but it would have to grow as electric bike popularity grows. Ideally, solar-powered charging stations would be put in place with the help of local and federal grants. Without renewable energy recharging stations, the electric movement really loses some of its appeal. I know some folks are proud of themselves for reducing their carbon footprint by driving a Prius or some other electric car, but where do you think that electricity is coming from? It’s likely from a coal plant, so don’t give yourself the Environmentalist of the Year award just yet.

Will it wheelie? Stoppie? What were your lap times like? When will the promoters allow these to race SX or MX? If it cost the same as a gas-powered bike, would you buy one? Why does it have radiator shrouds if it doesn't have a radiator? How many volts does the battery have, and what is the risk of shocking the bejeezus out of yourself working on it? Do you have to work on it? What did they do to prevent the wires from chafing on the frame and setting your family jewels on fire? Can you modify the bike to make it faster? For local schmucks, it seems like you would be better off having a 15-minute battery that weighs less, but have two or three of them. Who invented liquid soap, and why?

It will wheelie and stoppie, and my lap times were every bit as fast as they would have been on a 250F. To be fair, the track was tight and short. On a track like Glen Helen, I’m not sure how close the times would be. If costs were the same, I would still want a solution to quicker battery recharge time and/or longer battery life. It’s gotten better, but it’s not there yet. Alta has done a great job of making the bike “idiot-proof,” so shocking yourself would be very difficult. The only work is the tires, chain, sprocket, bars, grips, and controls. The work is very minimal. The wires are coated and tucked out of the way. The firmware cannot be modified so you couldn’t alter the bikes programming. Batteries are not easy to change and not recommended by Alta. Liquid soap was invented by Colonel Sanders to clean chicken grease off his fingers. Thanks for writing.

What will happen if I take it on my woods route and end up dumping it in the creek? Will it turn Crystal Creek into Chernobyl?

Nah, these things are sealed up pretty well and are totally waterproof. I wouldn’t go swimming with it, but it might actually do better than a gas bike in an accidental submersion because water can’t flow down the exhaust or in the air boot.