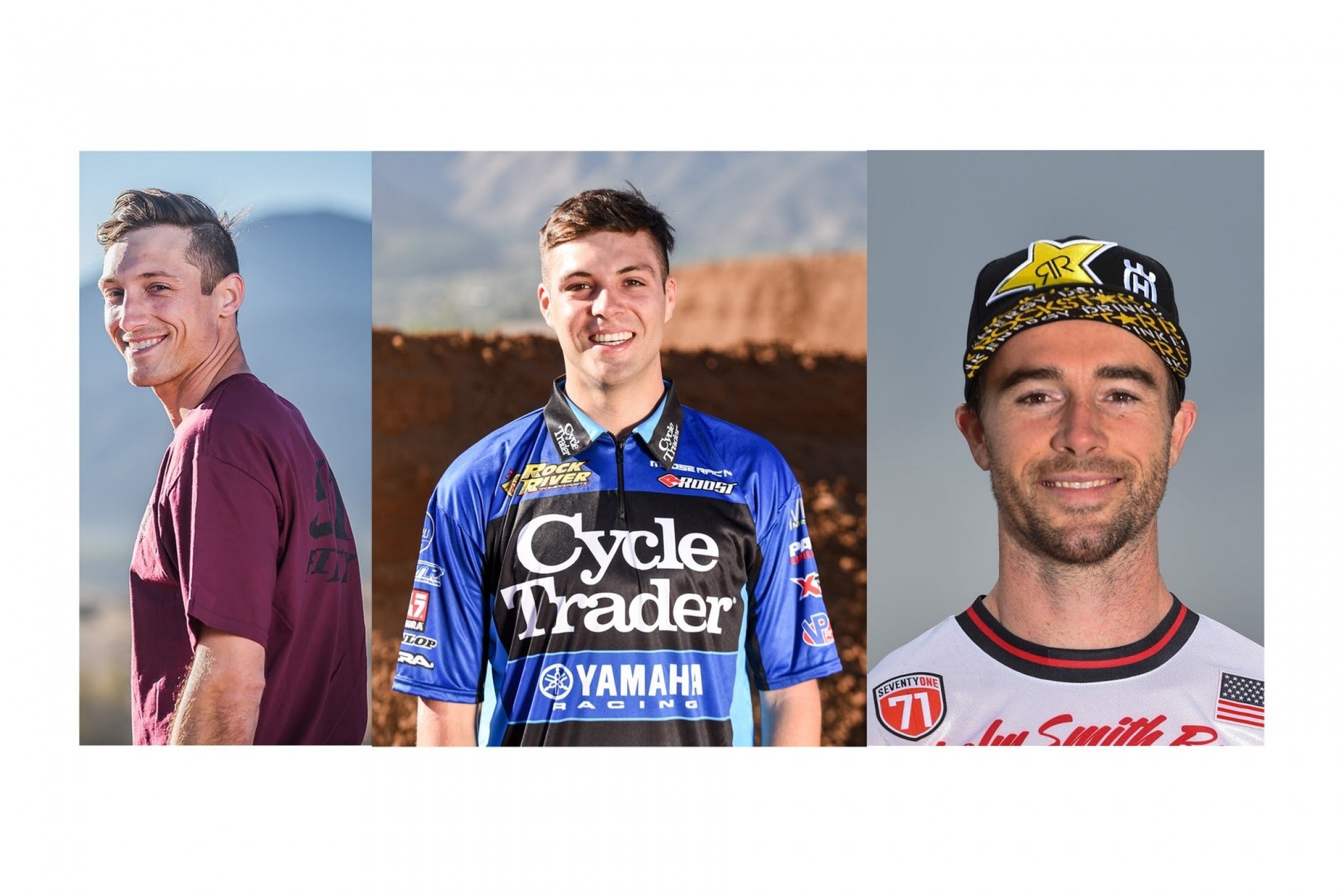 3 on 3 Questions from Daytona

We brought in 51Fifty Energy Drink Yamaha’s Kyle Chisholm, who finished 13th in Daytona, as well as CycleTrader.com/Rock River Yamaha’s Alex Ray, who is currently out injured. Also, our regular contributor Ryan Sipes is back.

1. Justin Brayton won! Give us a story about him.

Kyle Chisholm: It was really cool to see JB win Daytona. I feel like that would maybe be the least likely supercross race you would think Justin would win due to the fact that he's always been known to be a better SX rider than an outdoor rider (even though I think he hates that). But he even admitted he was surprised to win there, of all places! He rode great and it was awesome to see. Justin is a hard worker and it was cool to see it pay off for him.

I've got many stories of racing with Justin. One story I like was before last year (December 2016). I was in Geneva, Switzerland, racing and Justin was there as well. I had gotten the word from the AMA that I could move back down to the 250 class, and within a couple of days I had an offer from the MotoConcepts team to race a 250 for them. I still wasn't 100 percent sure if I wanted to go back down to the 250s. Justin had just signed with them and while I had a moment with no one around before the races started I asked him his opinion on me going back to a 250. In short, he basically helped me realize I didn't really have anything to lose by dropping back down. It was nice to get someone's opinion who understood where I was coming from, but was also an outsider. He really convinced me to go for it and go back to the 250 and try it out. And if it didn't work, I'd just go back to the 450 like I'd raced for almost the last decade. Maybe he just wanted me to move down so he didn't have to race me on a 450! Just kidding. Glad JB was around for some advice when I needed it.

Alex Ray: I’ve always looked up to Brayton, seeing where he came from and what he did with it—coming from a small town in Iowa and coming up through arenacross and building his career each year. I got to spend a lot of time around Justin when I trained at Club MX last year coming into the 2017 season, so I got to know him a bit more and see how he did things on the track. The guy is so consistent and hardly makes a mistake. One part I liked most was that if he would see me or any of the other guys struggling, he would give us guidance and help make us better. For that, I think Justin is one of the nicest guys you’ll meet in the pits, and I respect him so much.

Ryan Sipes: That was awesome! I knew he could get it done, but definitely didn’t think it would be at Daytona, of all places. JB has always been fast and has paid his dues. It was great to see him get it done.

Quick story about Justin that just defines who he is and how hard he works at his job. I lived with him for a few months during supercross in 2008, training and testing together almost every day. We worked hard, and it showed. We both got on the podium a few times in supercross and ran top five in outdoors. At the end of the year I invited him out to Kentucky after the last round of the Nationals. That's the time of year where most riders like to enjoy beverages that aren’t water, but not JB. He was already thinking about the next year and how he needed to get back on the training program. This was in August! Just a super committed dude who works as hard as anyone. I’m really happy for him and his family. Now go get another one, JB!

2. How gnarly is Daytona? Do you actually feel different during the race or the next day? Do certain muscles hurt more?

Chisholm: Daytona is definitely a gnarly race. It is the perfect mix of supercross and motocross. You need the timing, intensity, and mental focus of supercross, but the out of control, hang-it-out, stamina, and endurance of a motocross race. Your bike has to be stiff enough for the supercross obstacles, but also work through all of the rough sandy bumps and holes. I typically always end up using my supercross settings like I think most people do because they HAVE to work on the SX obstacles, so the bike just beats you up more than normal once the track gets rough. Because of this, I do feel a little more sore than normal after the race. In my opinion, it is one of the most physically demanding races of the year. I also try to make sure not to overdo my training the week of Daytona. At an outdoor race the track is rough, but your bike is set up for it; the same goes for a normal supercross. But Daytona is a different animal, and it's part of what I enjoy about it.

Ray: Daytona is a different animal! It’s different in so many different ways because it’s more high-speed with big rhythm sections, then you factor in that it’s sand, so it breaks down and gets all rutted and chewed out. It gets these crazy deep holes everywhere and they just wreck your back and legs because you’re trying to wheelie over them. The track is changing every lap, so you’re constantly thinking and looking to find new lines as well. Daytona is very hard on the body. I’m sure the guys felt it the next morning; that track was brutal and I’m sure I’d feel like a bus hit me waking up Sunday morning.

Sipes: It’s great to have Daytona on the schedule because it is so different from a normal supercross. You get different guys mixing it up with the lead pack and get to see who is really in shape. I loved the track this year; the last few years, it has been too tight and too slow. Just really one-lined and not many passing options. I raced Daytona in ’07, ’08, ’10, and ’11, and the only year that came close to what it was last weekend was 2011. Big long straightaways, deep sand, and multiple lines in the corners. It was tougher than a normal supercross, for sure, with the race being longer and how rough it was. My back was always sore afterward, just from pulling back so hard to keep your front wheel out of the holes and fighting for traction in the sand. I liked how they didn’t prep it too much throughout the night. Let ‘er get rough—these boys can deal with it!

3. Brayton was dealing with heavy pressure the last few laps. How do you focus when someone is closing in trying to take a position away?

Chisholm: It had to be so nerve-racking for JB those last five laps or so. I'm sure he saw [Eli] Tomac trying to close in, and he is not someone you would want to see coming up on you at the end of the Daytona Supercross! However, Justin did a great job to maintain his composure and finish the race strong. He did everything right. He stayed focused on the task at hand and stayed in the moment and not on the end result. He focused on hitting each jump and turn to perfection one at a time, just like he was at the practice track racing the clock by himself. I think the most important thing in that situation is to stay mentally strong, focused, and in the moment. You can't get ahead of yourself and think about the end result. That's when you make mistakes. He physically finished the race strong, but just about all of the guys racing in the 450 main event can race strong for 20 minutes. The tough part for JB or anyone in his position is more the mental side of it, and he did it perfectly. Awesome job to Justin, Tony, Mike Genova, and the whole MotoConcepts team!

Ray: I think when you’re dealing with pressure that late in a race, it comes down to mental toughness. In this sport, you’ve got to have that. I think Justin saw Eli coming and said to himself, “This is my win and you’re not gonna have it, not tonight!” And to be riding that track for the first 15 minutes and then having to make a sprint for the last few laps is very hard to do. You just have to keep yourself calm, hit your marks, and make no mistakes. It’s key you stay focused on what’s in front of you and not what’s behind you in that situation, because once your mind starts to think about the person catching you, that’s when the mistakes come.

Sipes: You’ll hear guys say it on the podium: “I just wanted to put in solid laps,” “I was focused on myself,” or “I just tried to hit my lines.” That’s the only thing you can focus on when you’re leading the race like that, because every guy behind you can see where you’re at, what lines you’re taking, and how much he’s gaining on you. As the leader, you’re basically in the dark on all that information. If your mechanic tells you a guy is closing the gap, it only makes it worse, because now you’re wondering where he’s gaining and what you can do differently. When I’m racing, I try to focus only on riding the track the best I can. The rest will work itself out. The best part of this is, Justin earned this one straight up. He felt the pressure, but just kept doing his thing and riding the track. Just wait. He knows he can win now. We’re gonna have another contender now, week-in and week-out. (P.S. Supercross is awesome.)