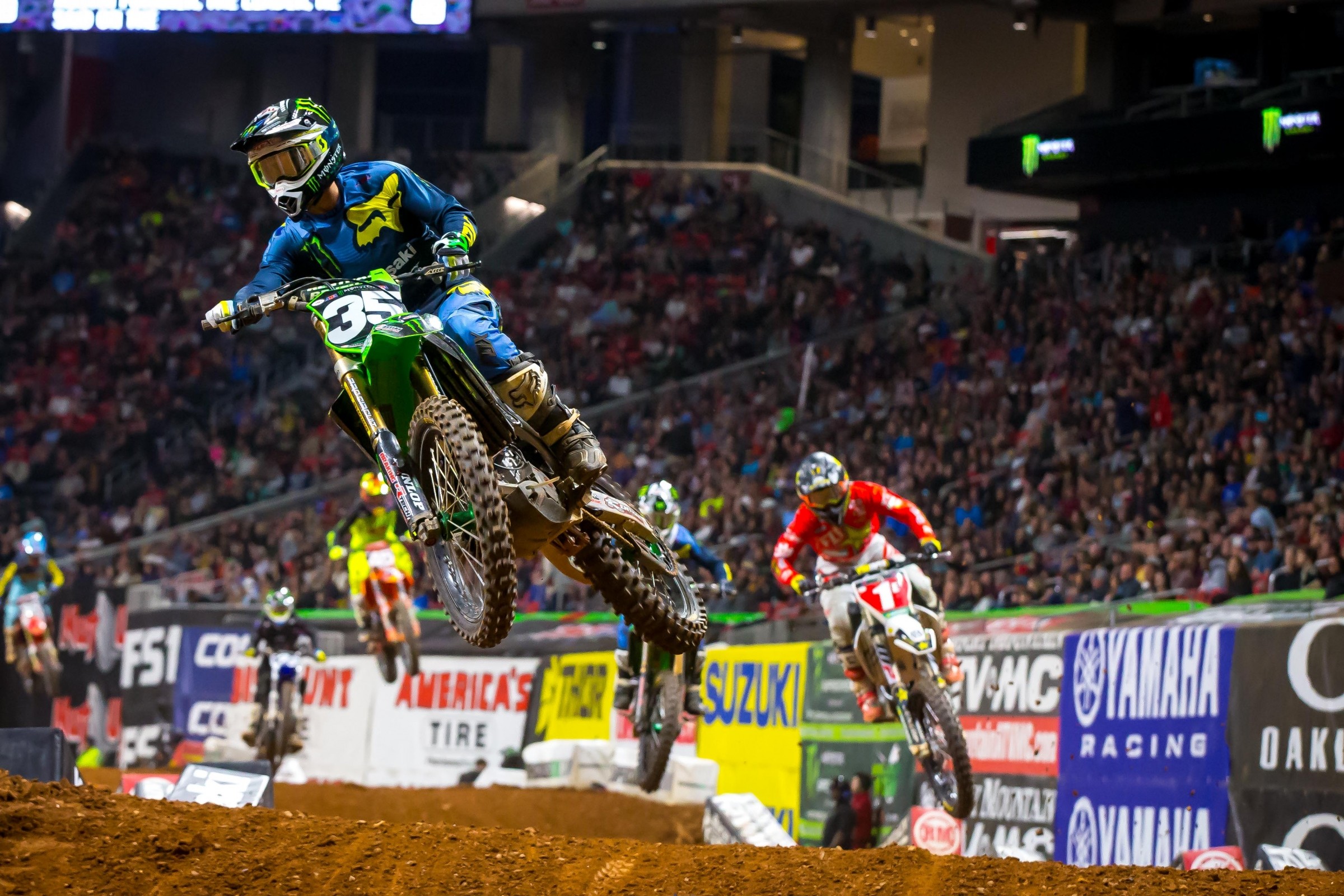 There’s a storm raging behind the scenes. It formed throughout the 2017 250SX East Region and seemed to culminate at the finale in Las Vegas last year. In Arlington, that storm regained its strength and then seemed to upshift again this weekend in Atlanta. This storm between Zach Osborne and the Monster Energy/Pro Circuit Kawasaki riders might be on the precipice of disaster if cooler heads don’t prevail.

Last year in Indianapolis, Zach Osborne and Adam Cianciarulo got into a practice battle that left Adam with a knee injury that I personally thought would cost him his season. Luckily it didn’t, but I still sat there last year thinking, “Guys, it’s only practice!” Testosterone levels were soaring and the pecking order was being established. With both riders taking shots at each other, hard feelings were only natural. Both riders thankfully were healthy enough to move on. That aggression carried over into mid-season incidents between Zach and Adam’s teammate Joey Savatgy, too. They had their moments with emotions running high more than once—both on and off the track. Joey’s family and friends were unhappy with Zach’s riding, and surely his team shared those sentiments.

Fast forward to Vegas for the final round and a season’s worth of gasoline was ready for a flame to set this scene ablaze. As we know, Osborne made a last-ditch move on Savatgy that left a green bike on the ground and Zach holding a #1 plate. There were protests and fines and arguments, but the championship went to Osborne. That didn’t sit well and hasn’t since. The hard feelings may have cooled to a simmer, but the pilot light was still lit.

In Arlington, we were back to a full burn. On the first lap of the main event, a third Monster Energy/Pro Circuit Kawasaki rider found himself involved with Zach. This time it was youngster Austin Forkner. As Austin tried to make a move in traffic, he cut down early exiting a berm. Unfortunately, Zach had already drawn a line for where he thought Austin would be and when Austin cut down, we had some serious contact. Austin was left on the ground and Zach went on to win.

I can see both sides of this move. Zach was up the inside and if Austin had driven around the outside of the berm, nothing would have really happened. For Austin, he had no idea Zach was there and feels he got taken out, plain and simple. Without all of the backstory and past drama, maybe this move is overlooked and chalked up to bad timing. That’s not the world we live in, though, and tempers were flaring after the race. To make matters worse, Zach was placed on probation last season and some felt this should have been the final straw. Zach standing on top of the podium again while a green bike was on the ground just compounded the undercurrent of displeasure and mounting retaliatory intent. I left Arlington thinking it wasn’t a matter of if, but more of when.

This past weekend in Atlanta didn’t help to calm things. As Zach and Austin were battling for the lead, I wondered if we were going to get more than clean racing. Austin was in the lead and with Zach eyeing a move, I remember thinking, “If Zach knocks him down, there will be a brawl after this main event.” That same lap, Zach pulled up behind Austin on the start straight and angled for an inside line down the next rhythm section. The facts are this: Austin and Zach nearly hit in the air and Zach high-sided over Austin’s bike in the next berm.

How each person interprets that incident will span from one extreme to the other. Some believe Austin wanted vengeance and cross-jumped Zach. Some believe Austin cross-rutted (not sure how without ruts in the jump) and jumped left while Zach floated a bit right, sending them into each other’s line. I am a little more down the middle, but I do believe Austin moved a bit left in order to protect the inside line. He also over-jumped the preceding double, loading his forks, which shot him a bit left (due to his lean) in the soft dirt. Either way, he knew Zach was setting up a pass and if he could lean that direction, he would also cut off that inside angle and block any pass attempt. Unfortunately, Zach was already there and there was no room to move left. The result was Zach crashing and some very hard feelings after this main event, but this time Zach was the one upset. The final main event didn’t see them near each other, thankfully, because I think we would have had someone on the ground yet again.

So, where do we go from here? I think this is far from over. Both sides are angry. There are a lot of races left and if we needed even more accelerant, these two are now separated by only two points. The resentment will be further fueled by title pressure. This story has been building and evolving for over a year now, so keep an eye out anytime these guys are near each other. As wild as this story has been, what happens when we go to Indy for the showdown? Zach, Joey, Adam, and Austin will all be out there together with points and championship aspirations at stake.