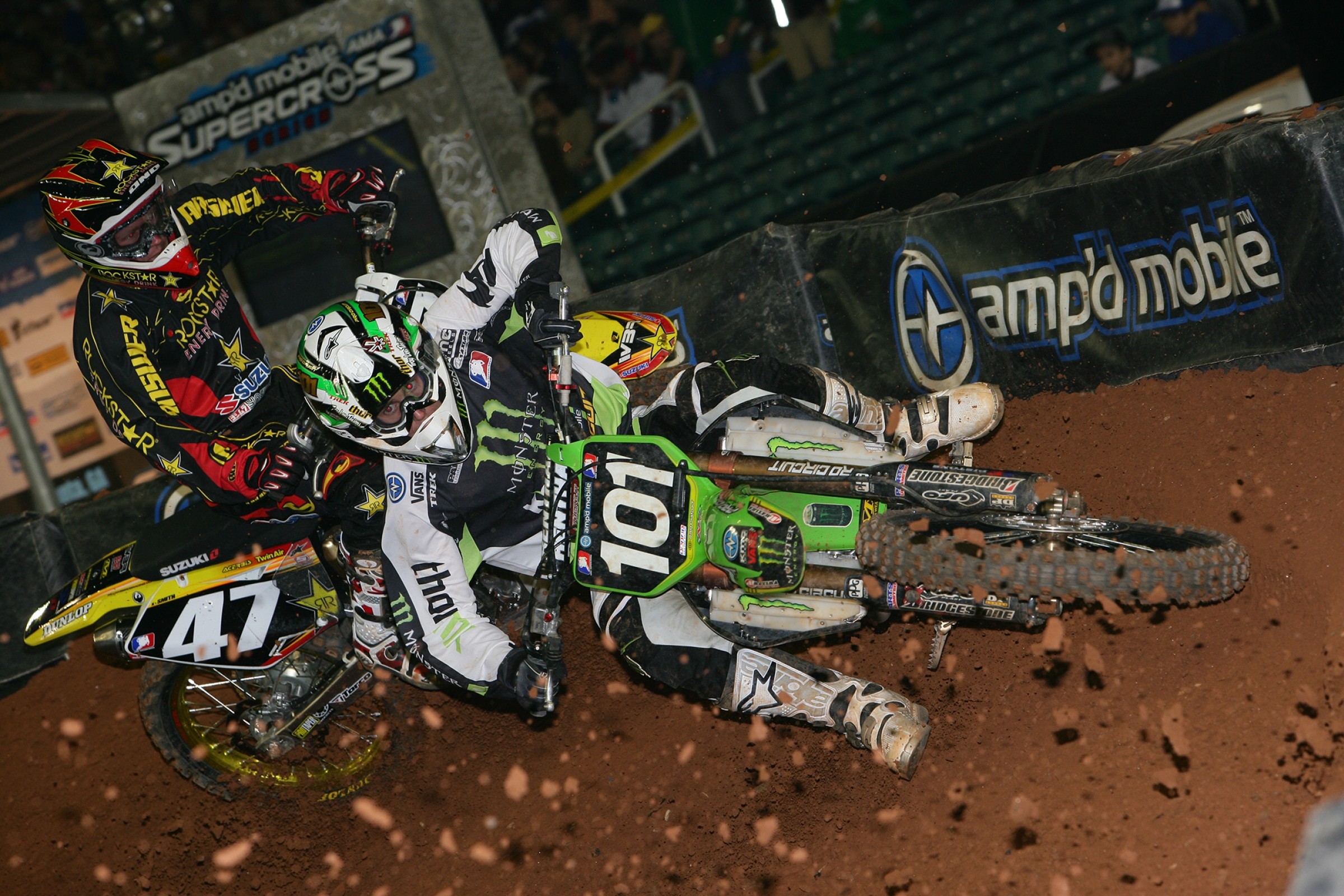 On This Day in Moto February 24

In one of the most exciting AMA Supercross races in history, Kawasaki's Jeff Ward came from behind to win the Atlanta Supercross, using a late charge to pass both Suzuki rider Guy Cooper and Team Honda's Rick Johnson, ending RJ's last best chance to win a supercross after snapping his wrist the year before and having to vacate his title. Yamaha's Damon Bradshaw and Honda's Mike Kiedrowski had a chance to win but crashed together. Kawasaki's Johnny O'Mara and Honda's Jean-Michel Bayle were also in the mix.

Suzuki superstar 125cc riders "Flyin'" Bria Myerscough and Mark "Bomber" Barnett took turns winning championships on either coast as Myerscough clinched the Suzuki CMC Golden State Series and Barnett claimed the Florida Winter-AMA Series for the second year in a row. Together they are set to take on Yamaha's Broc Glover for the upcoming 1979 AMA National Motocross Championship.

If it's 1996 then you can certainly guess the winner of the Atlanta SX! Team Honda's Jeremy McGrath keep his undefeated streak going, winning his sixth straight to start the series. Jeff Emig (Kawasaki) and Mike LaRocco (Suzuki) rounded out the podium.

But McGrath's win is not what the '96 Atlanta SX is most remembered for. Instead, it was this horrific crash of Splitfire/Pro Circuit Kawasaki rider Mickael Pichon, who was winning the 125cc race when he came upon a triple where a rider was down on the backside. These were the pre-safety lights days and Pichon had to eject high above the floor of the Georgia Dome in order to keep himself from hitting the stalled rider and floor crew. Check it out right here:

And if it's a supercross in 2001 you can probably guess the winner, as Kawasaki's Ricky Carmichael is keeping his own record run going at the Atlanta SX, but it was only four at this point, as Ricky's 13-race winning streak would run from the fourth race until the end of the 16-race series, while Jeremy's in '96 would run through the first 13 rounds of the 15-race series. McGrath finished second on this night with Georgia's own Ezra "Yogi" Lusk third.

Yamaha of Troy's Nathan Ramsey would win the 125cc class over KTM-mounted Brock Sellards and his YOT teammate Nick Wey.

In his first-ever AMA Supercross, Team Rockstar/Makita Suzuki's Ryan Dungey won the Lites main event at the Georgia Dome aboard the #62 RM-Z250. This is also the first-ever AMA Supercross for New Zealand's Ben Townley, brought over by Monster Energy/Pro Circuit Kawasaki to compete. BT101 ended up with a DNF and zero points. Don't worry, he would bounce back quickly!

And then, in a thrilling main event, Kawasaki's James Stewart topped Suzuki's Ricky Carmichael and Yamaha's Chad Reed, in what was one of RC's last AMA Supercross races, as well as his last visit to the Georgia Dome.