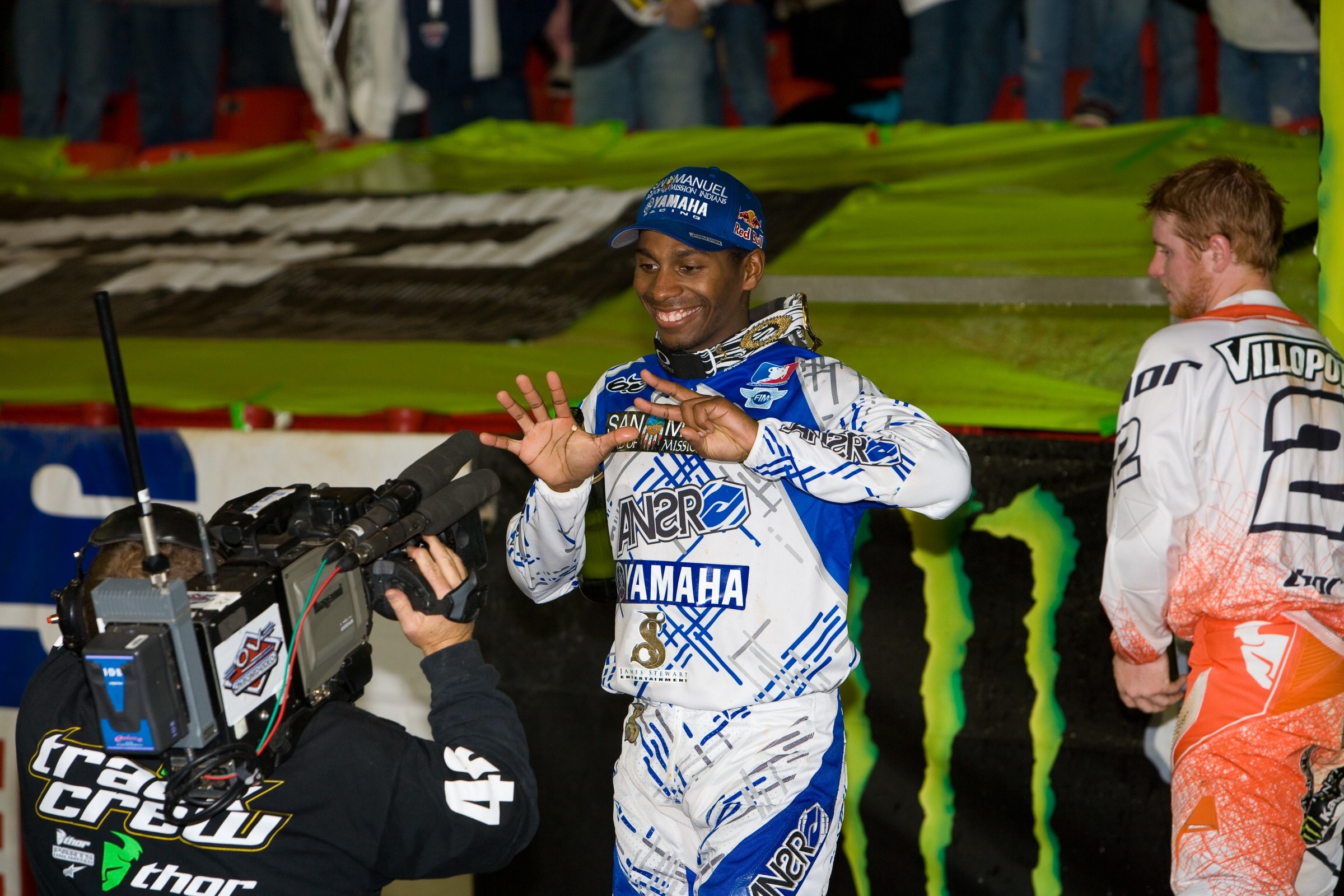 On This Day in Moto February 21

Team Honda's Rick Johnson won the fourth round of the AMA Supercross Series at the Orange Bowl in Miami over Team Kawasaki's Ron Lechien and Jeff Ward. Every rider in the 20-man main event, from #1 Rick Johnson to #99 Dean Matson (the 19th-place finisher), had single or two-digit numbers. You can check out the Vault entry on the race here.

In the 125cc class, Florida's own Ron Tichenor won aboard a Suzuki RM125 while Marissa, Illinois' Kenny Bollmeier finished second in what will be the best finish ever in his rather short career.

Believe it or not, the title sponsor for the event was Penthouse.

We couldn’t find the 1987 Miami Supercross on YouTube, but here’s a cool race from earlier that year with a few names in the 80cc class you might recognize.

San Manuel Yamaha's James Stewart won his seventh straight AMA Supercross, and for the seventh straight time, Rockstar/Makita Suzuki's Chad Reed was right behind him in second. Finally, it was enough for Stewart to take over the points lead that he'd been trying to claw his way into ever since he crashed at the Anaheim opener and finished 19th. After Atlanta, the points showed Stewart ahead of Reed, 177 to 174, in what was rapidly becoming a bitter feud.

Another year, another Atlanta Supercross, another four-race winning streak for Jeremy McGrath. This one came in the middle of his push to get his AMA Supercross title back from Kawasaki's Jeff Emig after Jeremy's not-so-great 1997 season on a Suzuki. At the Georgia Dome, he beat his Chaparral Yamaha teammate Jimmy Button, and Kevin Windham made it a 1-2-3 Yamaha sweep by placing third.

That same night, Splitfire/Pro Circuit Kawasaki's Ricky Carmichael got his second straight win in the 125 East Region and was on his way to having the one and only undefeated season in class history. FMF Honda's Danny Smith and Yamaha privateer Robbie Skaggs would round out the podium.

Buddy Antunez notched his first-ever AMA/PJ1 National Arenacross Championship title at the final round of the series in the Denver Coliseum. Riding for Thor/Primal Impulse/Tuf Racing Honda, the former (and future) factory Suzuki rider in the last main event of the 13-race series would claim what would be the first of five AMA National Arenacross Championships. His teammate Denny Stephenson (like Bud Man alumni of the legendary Great Western Bank team) won the Dash for Cash.