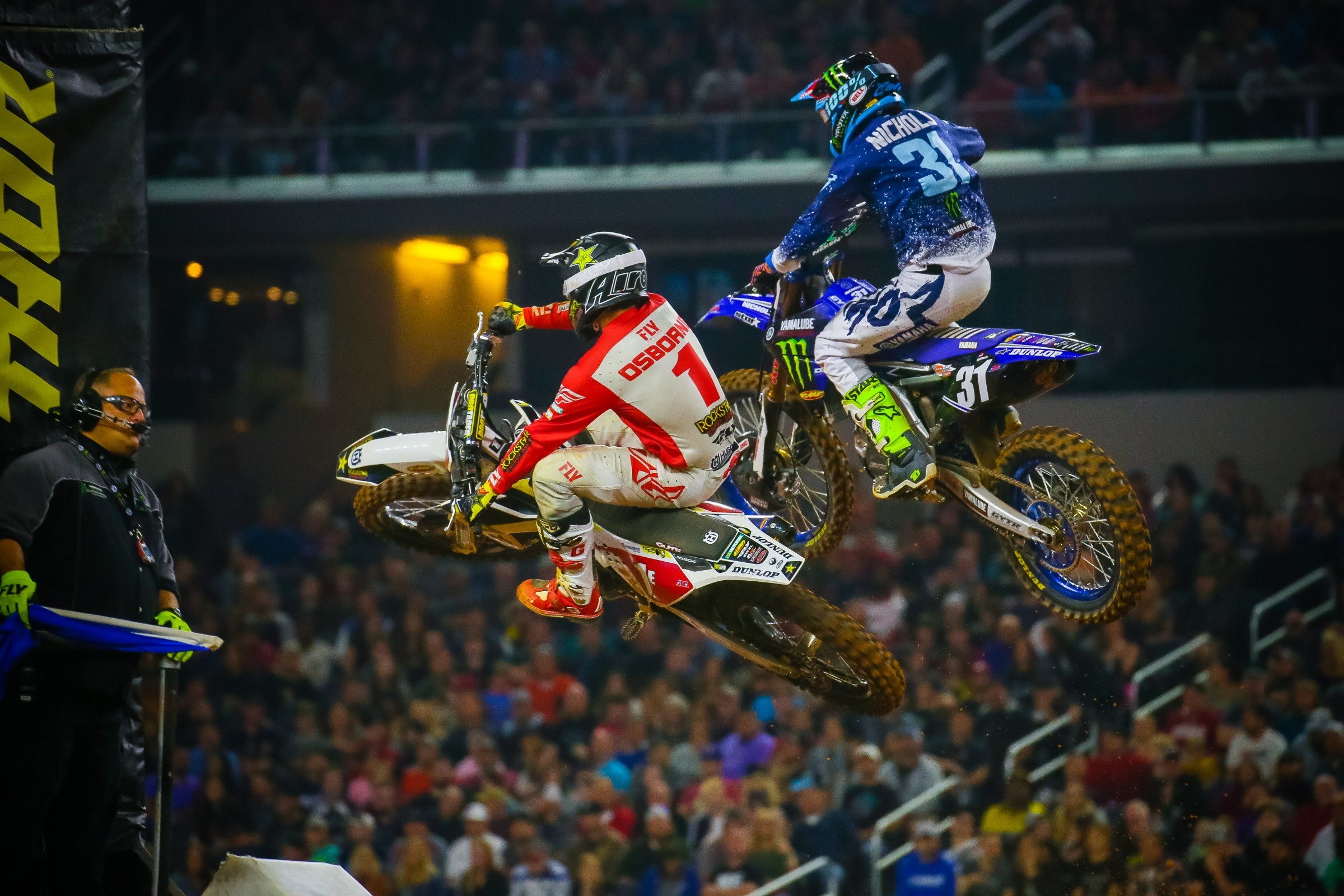 3 on 3 Questions from Arlington

1. Can we take anything away from the 250SX East Region opener?

Jason Thomas: Yes and no. I think we saw that the usual suspects are ready to do battle. Davalos looked like he will win races, but with a 25-point deficit already, he may need some serious help to get into title contention. That first-turn crash did Osborne a huge favor and is exact opposite of what most of the field was hoping for. I think the biggest takeaway is that the 250 class is still the 250 class. These guys are nuts.

David Pingree: My takeaways: anything can happen. After watching Davalos destroy his heat race, I thought this might be the year for him. His first-turn incident wiped that hope away. Even if he doesn’t have physical injuries, he took a good knock to the head in that crash; which wasn’t his fault, by the way. I was looking forward to watching Ferrandis in the final as well, and that didn’t happen. Zacho is still the man to beat for the title. Sean Cantrell is legit; the kid got starts, rode up front, and even showed some fight when the champ went by. This class, as always, is drama.

Ryan Sipes: I thought it was a great race. It’s always fun to switch over to East Coast and start a whole new championship with new riders. The storylines I took away were:

2. At this point, Anderson can ride for points—but is that hard to do? What would it be like to ride not to lose for ten weekends?

JT: I think it's manageable. Look at Ryan Dungey's 2017 campaign. He didn't really "ride for points," but he also didn't take unnecessary chances. When a win was in the cards, he took advantage of that situation. When it wasn't, he didn't force it. That's the key to strangling the life out of a series. Anderson doesn't have to dominate. With the injuries and lack of consistency among the other riders, he only has to capitalize on the situations as they arise and avoid the huge mistakes. A tip-over crash is okay when you can salvage a fourth-place finish like he did in Arlington and also on an off-night in Glendale. That's how champions win a series with races to spare. Wins are great, but when your worst night is fourth, you aren't giving your competition room to breathe.

Ping: I think he needs to stay focused on what he’s been doing. Sure, the math says he doesn’t need to win, but there are still plenty of rounds to run. The worst thing he could do is get into a head space where he is constantly riding defensively. However, it will be difficult not to think about the fact that Eli Tomac isn’t a threat for the title if he goes by. In reality, Jason can just keep tabs on Marvin Musquin and make sure he isn’t losing big chunks of points to him and coast into the #1 plate. If he continues to go out with the intention of winning and doesn’t make bad decisions, he’ll be fine. The 2018 version of Jason Anderson is smarter, calmer and (apparently) ready to win titles. I think the most difficult thing about being in his position isn’t the race weekends, because you can focus on your race and riding your best. The hard part is going to be riding laps every week in practice without thinking about getting hurt. Every day he has to go to the practice track and do his laps knowing that he’s in a great spot to win… but an injury could derail all of it. It’s difficult to keep focused and keep pushing.

Sipes: With this many races left in the championship, I don’t think he’s going to want to just ride for points. Actually, with his lead as big as it is, I think it gives him more freedom to go for wins. Obviously, he’s not going to take any unnecessary chances or ride over the edge, but we all know he can win with his normal speed. And I think everybody in his corner is going to be telling him the same thing. “Just be you.” Ride like you have all year and everything is going to work out just fine. Riding “just for points" is going to create more problems than it prevents.

3. Justin Hill jumping to the 450s this weekend. Thoughts?

JT:  This will be interesting. I see him fitting in with the fifth- to 10th-place pack of Peick, Seely, Webb, Wilson, Tickle, etc. He hasn't raced a 21-minute main event on the bigger bike, so there are questions there with fitness and lack of 450 testing. If he can put in solid laps and come away with a top-ten, I would consider that a success even with an injury-riddled field.

Ping: I think Justin could do really well. He was making a bunch of noise last year about wanting to ride the 450, and I believe he’ll take a hard swing at this opportunity. He’s out of contention for the championship out West, so this makes perfect sense. Justin has an abundance of talent and his style suits a 450: smooth and precise. I believe he will post some top-tens, but it wouldn’t shock me to see him in the top five.

Sipes: I’m excited. We are down quite a few riders in the 450 class, so we need more bodies. But really, it will be fun to watch and see if he’s as good as he thinks he is on the big bike. I know he will be fast, so hopefully he can be solid enough to stay upright and hang in there for 20 minutes plus a lap. It might take a few weeks, but give him a good start and I think he could be a guy who could mix it up with that top-five pack. More fast guys are always a good thing.