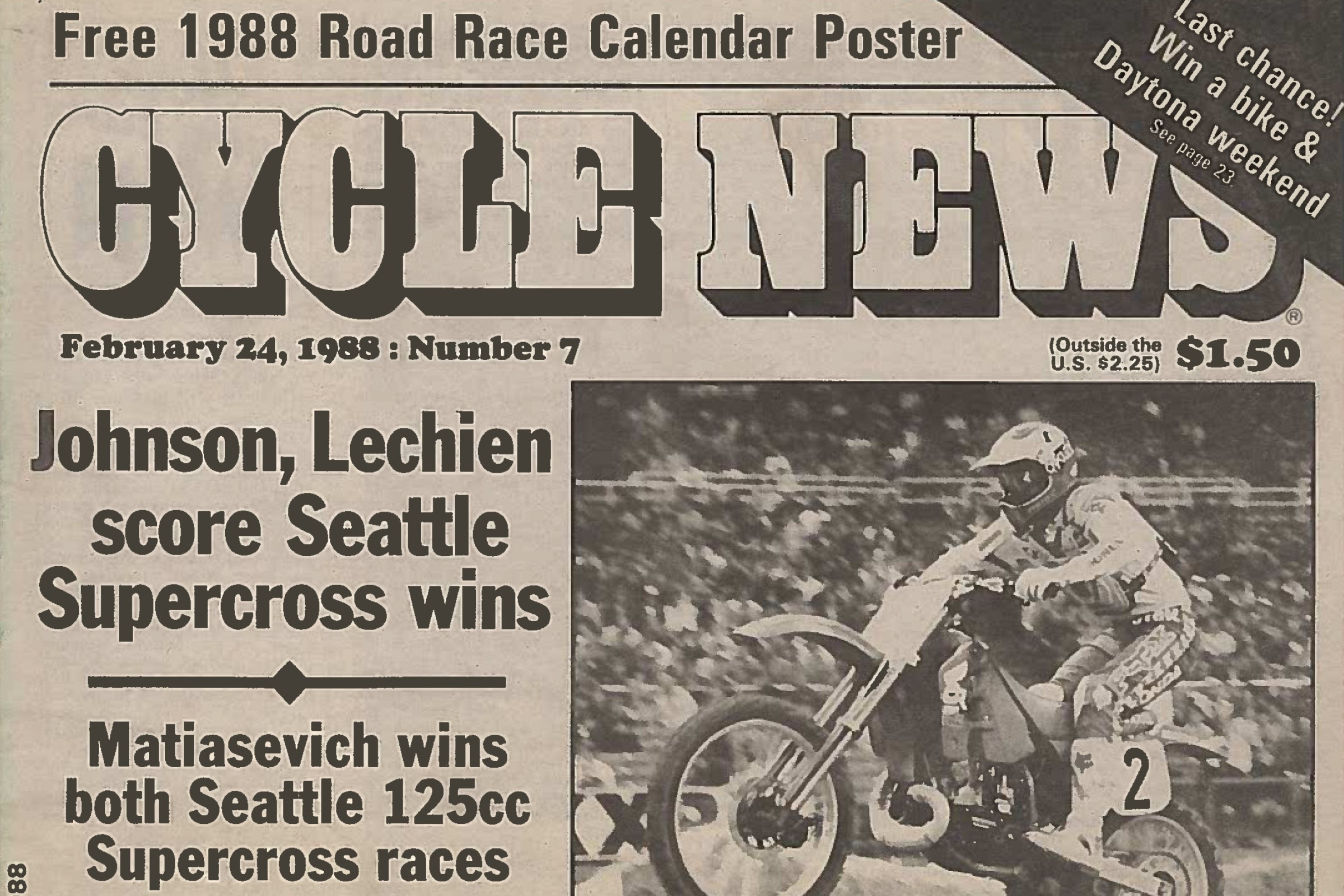 On This Day in Moto February 13

In a surprising move at the annual Dealernews Indianapolis Tradeshow, AMA President Ed Youngblood resigned after nearly 30 years with the American Motorcyclist Association. Youngblood and the AMA had been under pressure from a lawsuit involving the for-profit subsidiary Paradama Productions, Inc., and Roger Edmonson, founder of North American Sport Bike. The ruling came down on Edmondson's behalf and could have cost the association as much as $3.5 million in damages.

The first night of the Seattle SX doubleheader was a 1-2-3 finish for Team Honda's Donnie Hansen, Darrell Shultz, and Johnny O'Mara. Shultz would get back on the podium the next night, but he was once again second, only this time he was behind a Suzuki—Mark Barnett's.

Another opening night for Seattle, another win for Honda, this time with Rick Johnson. RJ led Kawasaki riders Ron Lechien and Jeff Ward across the finish line in the Kingdome. The next night it would be Lechien's turn to lead the way at the finish.

Mickael Pichon was born in France. He would later become the first French rider to win a 125cc AMA Supercross main event, as well as the first to win a 125cc AMA Supercross Championship. He would race in America through 1999, first on a privateer Honda CR125, then with Pro Circuit Kawasaki, then with Team Suzuki, and finally with Team Honda. Upon returning to Europe in 2000, Pichon would earn himself a pair of FIM MX1 World Championships.

American motocrosser Tallon Vohland, riding for Becchis Honda and living in Europe to compete in the FIM 250cc World Championships, won the Beaucaire International Motocross at Circuit de Saint Roman in France. Stefan Everts made his debut on a Kawasaki after leaving Suzuki. He placed second ahead of Chesterfield Yamaha's Fredric Bolley.

Also in 2005, Finnish import Juha Salminen won the first GNCC of his career in Gilmer, Texas. Salminen, the FIM World Enduro Champion, had been assigned the Suzuki GNCC Series by KTM, hoping to unseat defending champion Barry Hawk. The Yamaha-mounted Hawk suffered a faulty front brake line after being hit with a rock on the first lap.