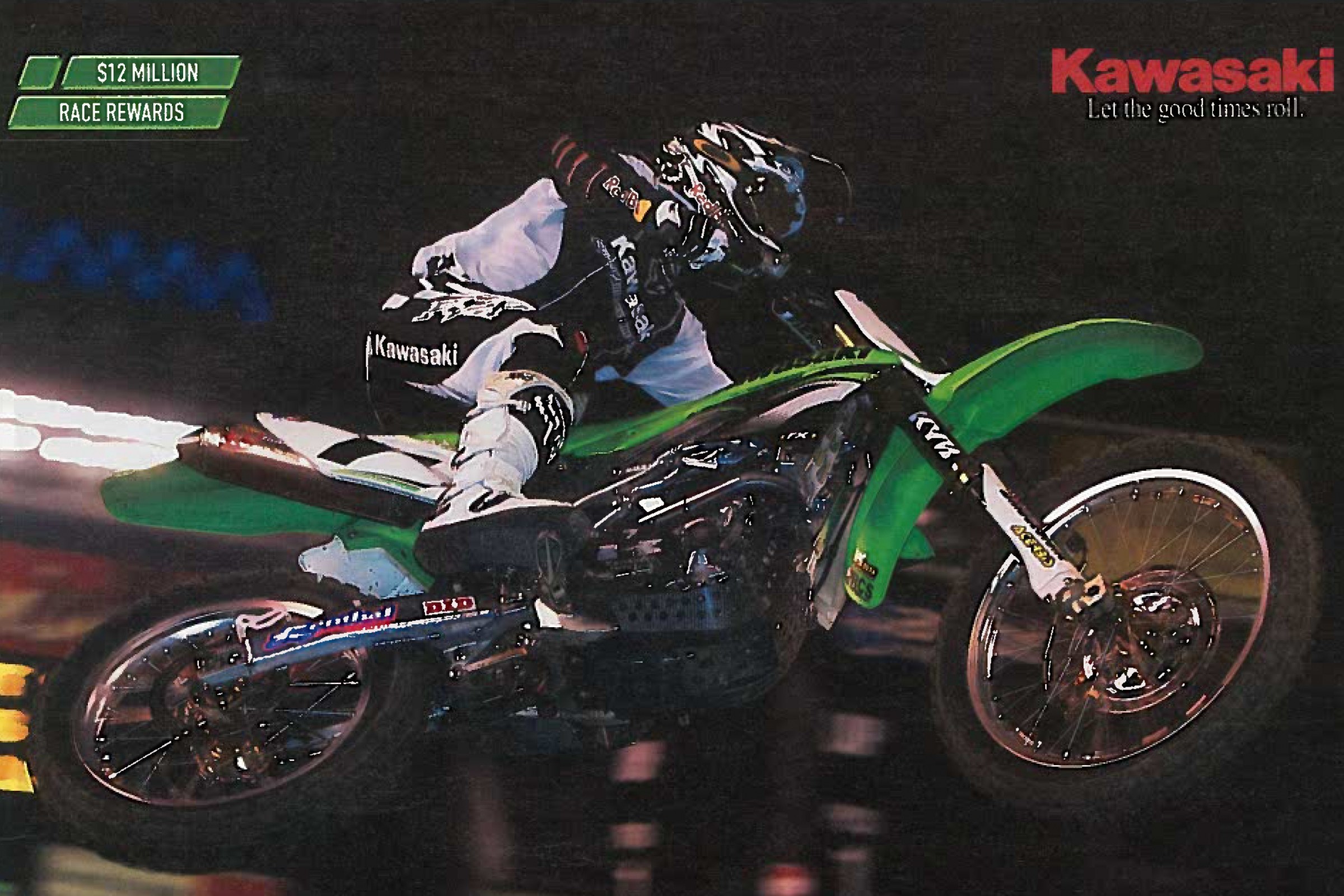 On This Day in Moto February 10

Honda's Jeff Stanton took advantage of some big crashes and injuries from his title rivals to take command of the 1990 AMA/Camel Supercross Series in San Diego. Stanton, already 18 points down on Yamaha’s Damon Bradshaw going into the third round, ended up winning the San Diego main event after Bradshaw crashed out five laps into the main event while leading. Damon injured his ankle and took an ambulance ride to the ER. Kawasaki's Jeff Matiasevich and 250cc rookie Honda's Mike Kiedrowski finished second and third in the main event, dubbed the Coors Extra Gold Super Challenge at Jack Murphy Stadium. Other big crashes included Bradshaw’s Yamaha teammate Doug Dubach and Kawasaki’s Jeff Ward, both of whom crashed in the same tricky section.

Stanton's teammate and title rival Jean-Michel Bayle also failed to score any points for the second race in a row, as JMB had injured his elbow in practice the previous week in Houston and ended up sitting out rounds two and three of the 18-race tour.

After the race, Stanton told the crowd, “The strong will survive. A lot of riders fell, but the number one plate didn’t; I just keep plugging away. I’ll sit back, use my head and ride consistently.” Stanton left San Diego with a three-point lead on Bradshaw.

In a stunning move that caught many in the industry off guard, SFX Motor Sports CEO Gary Becker announced that he is stepping down from his position atop the promotional company that was running AMA Supercross at the time. Becker, a 23-year veteran of the company, is the son of Allen Becker, the Houston-based promoter who began promoting flat track and TT races in the Houston Astrodome in 1968, as well as the Dallas and Houston Supercross races since the mid-seventies. The Beckers company, PACE Motorsports, had been bought out by SFX.  Becker, along with Charlie Mancuso, was responsible in large part for the makeover that the supercross series got in the aftermath of the “Night the Lights Went Out in Vegas,” the 1995 Las Vegas finale that saw superstars Jeremy McGrath, Mike LaRocco, Mike Kiedrowski, and others not race after the lights failed in the stadium. Many felt that the riders were trying to make a statement about the direction of the series in general, and Becker and Mancuso decided to unify and upgrade the series across the board.

That same night, at the Indianapolis Supercross at the old RCA Dome, Kawasaki’s Ricky Carmichael won again at round six of the AMA/EA Sports Supercross Championship, topping defending champion Jeremy McGrath and Team Honda’s Ezra Lusk. The win, RC’s fourth of the series, moved him six points ahead of Jeremy in the points standings.

In the 125 class, the East Region began with a win for Suzuki’s Travis Pastrana aboard his Lee McCollum-prepped RM125, topping the Yamaha of Troy YZ250F of Nathan Ramsey and Pro Circuit Kawasaki’s Mike Brown.

Jeremy McGrath, now retired, announced that he and his management partners WMG will be the promoters of the Jeremy McGrath Invitational Supercross at the Home Depot Center in Carson, California, that coming October.

Hard to believe it's been nine years since freestyle motocross star Jeremy Lusk, of the Metal Mulisha, was called after failing a coach-flip trick in San Jose, Costa Rica. Lusk was in a competition called The Knights at San Jose's Ricardo Saprissa Stadium three days earlier when he tried a Hart Attack Indian Air Backflip. Lusk could not get fully rotated around and suffered a severe head injury upon landing. He held on until the following Monday, February 10, before he passed. He was 25 years old.