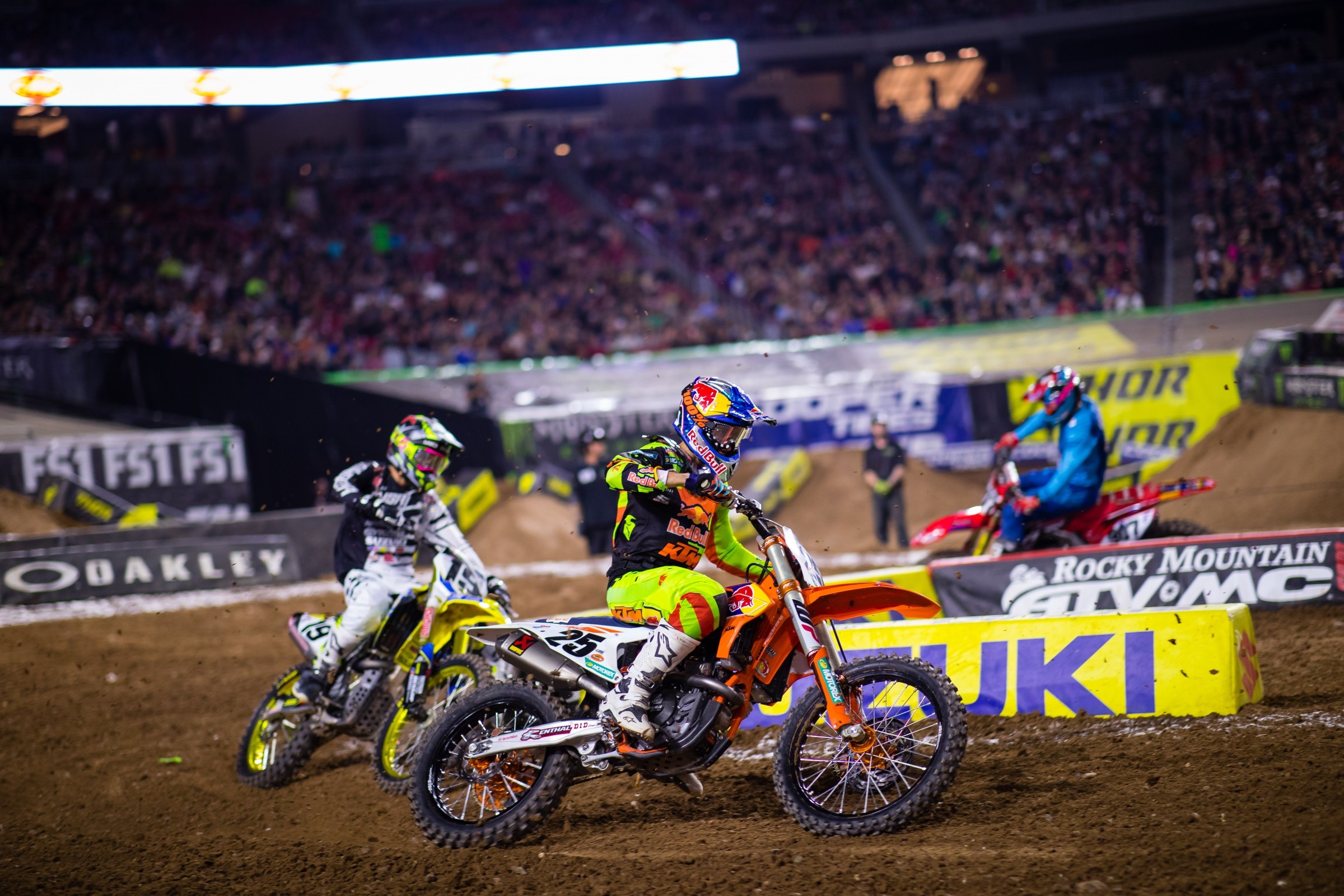 450 Words Anatomy of a Battle

Round four of Monster Energy Supercross at the University of Phoenix Stadium was full of battles. The extra-large football stadium layout allows for bigger, longer rhythms and 180-degree turns that make for great passing opportunities. For most of the 450 main, fourth through eighth place were within two to three seconds of each other, with Weston Peick, Marvin Musquin, Josh Grant, Jason Anderson, and Cole Seely mixing it up. We caught up with Musquin, Peick, Grant, and Seely after the race to talk about their nights in Glendale.

Racer X: Walk me through your main.
Marvin Musquin: The main, I was in a good position off the start and that’s the key right now, especially in my condition. I’m not 100 percent right now. So, I was right there with [Ken] Roczen, with [Jason] Anderson, and I tried to follow those guys, get in the good rhythm. That’s what I did. I haven’t done a 20-minute moto since the week before Houston, since I hurt my shoulder. So, it’s definitely been tough, but we’re getting better and stronger and I was able to do that 20-minute main event and being consistent, smooth. Got a top five. For me right now, that’s good.

Can you talk about that battle with Peick that you had?
Yeah, Weston Peick was riding good. Obviously took me a while to get around him. That’s a little bit of a bummer because I was able to follow Roczen for a couple laps before that, and then he got away from us. Weston is a tough guy to pass. He’s riding good. I finally got around him and I was able to ride myself. It was good.

Then you were in battle mode with Anderson for a little bit too.
Yeah, I passed Jason in the beginning. To be honest, a little bit surprising. Not being 100 percent, I was able to get around him. Like I said, I was trying to be smooth, not making too much mistakes. Go through the whoops smooth and nice. I haven’t done that every time, but it was decent. Just towards the end, Jason caught me and passed me. But it’s okay, we’ll get better from here.

Considering your injury, you can’t be too upset with fifth place. Are you happy with where you’re at with your shoulder?
Exactly. The week after Houston, I didn’t ride all week. Anaheim 2 was actually pretty good until I overstretched my arm in a section and then it hurt again. So, a little step back. Then during the week slowly getting better. Then finally Thursday I was able to do some laps. Not even a 20-minute moto, but like a shorter moto. You lose the rhythm so fast. That’s why it’s so hard. That’s why from now it will get better.

Speaking of rhythms, what’d you think of the track tonight? It seemed like there were quite a few options out there.
Yeah, that track was crazy. Always here. I feel like last year was also such a big track. That stadium is huge. If you want to fill up the whole floor, you got to make big rhythms like that. I’m glad I put it off during the main because I wasn’t doing the three-three before the finish line, for example. I pulled it off in the main. Things like that. It comes with confidence and it’s building back up, I would say.

Where would you say you are with your shoulder, percentage-wise?
Well, it’s getting very close to 90 percent; I would say, 80 percent. Ligament-wise and stuff like that, it’s better. It’s more strength-wise. It’s a little bit weak but getting stronger, and confidence is getting better too.

Racer X: Walk me through your day. Another solid ride and finish.
Weston Peick: Yeah, today was not too bad. I kind of wanted to get through this race healthy, without any injuries. Last year I had a bad crash here and it took me away for the whole season. But today went well. Got off to some really good starts. I finished third in the heat race and showed some good speed. Same thing with the main. Got a third-place start. Passed for second. Ran up there for a couple laps and just started making a few rookie mistakes and cased quite a few jumps. Then I kind of went backwards a little bit. Got it back together and then held it down for sixth for the rest of the race.

Are you happy with that? You were riding good in second, then it seemed like you lost some steam, and then picked it back up.
Yeah, I’m happy with a sixth. I bumped up to fourth in points. It’s obviously four races in, but still it’s a good spot to be in. Sixth place is still good. Obviously, I think I could have been possibly on a podium this weekend if I hadn’t have made those mistakes. Like I said, making those mistakes kind of took the air out of me a little bit and I had to kind of bounce back and get it back together.

What about that battle with [Justin] Barcia?
Yeah, it was good. I know with Barcia, he’s riding really well right now. He’s consistent and he’s got some good speed. I knew when I rolled it in on him before the whoops, I knew that if I made one little mistake that he’s going to be right there on me, and he was. Like I said, he’s riding good. That’s how I expect him to race.

Can you anticipate his moves? You guys have ridden a lot of laps together.
Yeah, I know Barcia like the back of my hand. I know that if you can hear him in your ear you either are going to, for myself, cut across the turn or just know he’s there and let him do his thing. It’s kind of one of those things.

Racer X: Tonight was full of good racing. How was your night?
Josh Grant: Yeah, it was good. I’m riding good. That’s all I can say. I made a couple mistakes in the last two laps to go in the main and got shuffled back. I think three guys got me on the last lap. I made a mistake in the sand and almost went down.

When you diverted off the sideline after the sand whoops?
No, that was the first one, and then I did it again the next lap and almost fell in the sand. So, I just made those two mistakes and it hurt me. I felt like if I could have just stayed in control those last two laps, I could have got Peick, maybe, for a top five. Just made some mistakes at the end.

You were on him at the beginning and it seemed like a real supercross track today?
Honestly, yeah, I liked it. It was pretty peaky. This morning it was really wet and kind of sloppy. You could make a mistake real easy. But for the most part the track came around, especially when they had time to work on it and get ready for the night show. It was pretty good. I’d say the first of the heat races were really good, and then it started drying out. It was really close to like a Vegas-type track at the end. The whoops were really hard packed, slick, slippery. I struggled a little bit with the front end, trying to kind of tuck a little bit. It started getting dry, so it made for a couple mistakes.

That one off the sand, that was a close one.
I almost hit the flagger guy, and the finish line stand where all the team personnel are. Just kind of bummed on the mistakes, but at the same time I’m kind of stoked on how I’m riding. I’m just in the mix, and that was my goal. Just got to put it together.

It seemed like it was hard to put together a consistent lap every lap and there wasn’t anywhere you could relax on the track. What do you think?
Where I was at, and I guess with the other guys, it was intense. There was no time to just take a step back and breathe. It was like we were in a dog fight the whole time. We were like whiskey rebels getting ready for a bar fight.

Another top ten, you got to be happy with that.
Yeah. I’m stoked. That’s been my goal, is obviously to stay in the top ten. The first four rounds, we’re inside the top ten. We had two ninths, a sixth, and now another ten or whatever. I can’t complain. I’m starting off better than I did last year. At the end of the year, towards the end I was just clicking off better finishes. It’s a long series, so it’s going to be interesting.

Racer X: Can you run me through your night, Cole? You were charging through the pack and then at the very end you went backward. What happened?
Cole Seely: For most of the race I was one of the fastest guys on the track, but just got off to a bad start and had to use a lot of extra energy to try and get really into just seventh. Then I kind of hit a wall there just with energy. I had a moment in the sand. I actually knocked the wind out of myself and just never really recovered from that. Then just started going backwards. A super, super frustrating ride. Definitely not me. Just felt like I rode like I wasn’t myself. Just struggled with the track a bit. Struggled with my flow all day. Just one of those nights, really.

So, it was the moment in the sand that set you back?
Yeah, it was more the moment that really just completely depleted my flow. It took me like half a lap to get my wind back in my sails. Riding around with no wind in my lung, it felt like. That really just kind of slowed me down.