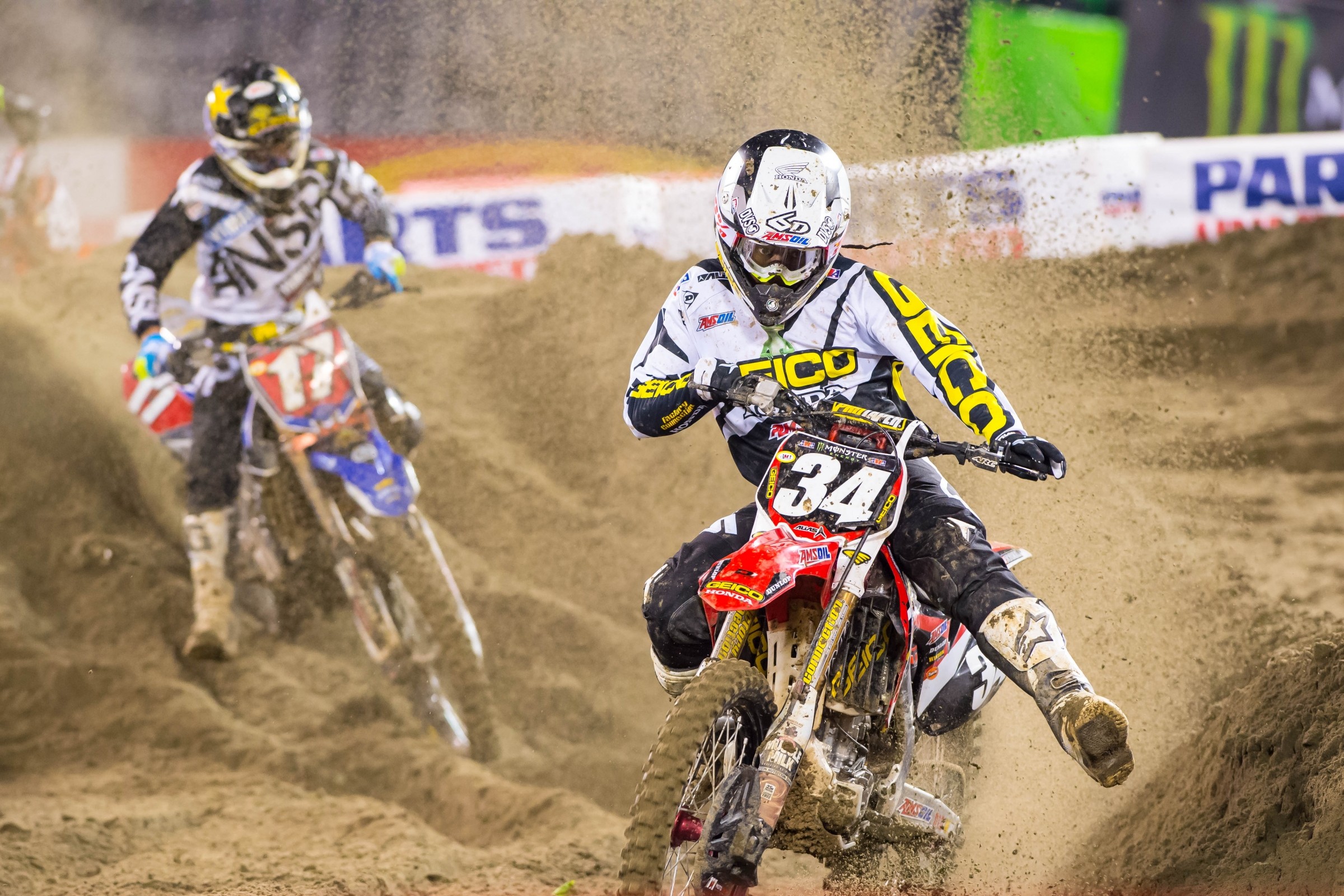 On This Day in Moto January 24

Team Honda's Ezra Lusk won his second straight main event in Toyota Trucks/THOR/Parts Unlimited AMA Supercross. Working off the previous weekend's wire-to-wire win at the Houston Astrodome, Lusk rode into Tempe, Arizona's Sun Devil Stadium ready to get right back up on top. He was able to run down Chaparral Yamaha's Jeremy McGrath after a mid-pack start, ensuring that McGrath started his Yamaha tenure with an 0-3 record. The defending AMA Supercross #1 finished fourth behind Honda of Troy's Mike Craig.

Former AMA Supercross and Motocross Champion Jeff Ward finished third in the IRL season-opener, curiously called the Indy 200 despite the fact it was held at the oval track at Walt Disney World in Orlando, Florida. Eddie Cheever and Scott Goodyear were the only drivers ahead of the motocross-turned-open-wheel car racer.

Kawasaki rider Destry Abbott was the big winner at the AMA National Hare & Hound race in Lucerne, California, while Honda 250cc Grand Prix racer Ryan Hughes worked himself into race shape by sweeping the race at the third round of the GFI Winter MX Series in San Jacinto.

The U.S. Off-Road Championship for Trucks held a race in the Minneapolis Metrodome and included a Stadium Thunderbikes class for four-strokes. The winner was Spud Walters on a Yamaha, followed by Minnesota's own Cory Keeney and Yamaha-mounted Chris Ridgeway.

Pro Circuit Kawasaki's Ivan Tedesco won his fourth straight race to begin the 2004 125SX West Region in San Diego, aboard a KX-F250. "Hot Sauce" went on to win seven of the eight rounds and the title.

Team Yamaha's Chad Reed won 250 class on a YZ250 two-stroke at San Diego over Factory Connection Honda's Kevin Windham on CRF450 and Yamaha teammate David Vuillemin, who was also on a YZ250.

San Manuel Yamaha's James Stewart won in Houston over Suzuki's Chad Reed and Monster Energy Kawasaki's 450 rookie Ryan Villopoto. In the Lites class Frenchman Christophe Pourcel won the East Region race over Brett Metcalfe and Nico Izzi. For Metcalfe, it was one of his nine AMA Supercross podiums in the 125/250 class, but he never actually won a race. Then-Suzuki factory rider Izzi never won, either, though he did have a handful of podiums.

GEICO Honda's Malcolm Stewart won the Oakland 250 Supercross over Star Racing Yamaha's Cooper Webb and Alex Martin. It was Mookie's first win and allowed him to join his big brother James as two of the few brother combinations to have AMA 125/250 Supercross wins (Tyson and Tallon Vohland are the other two).