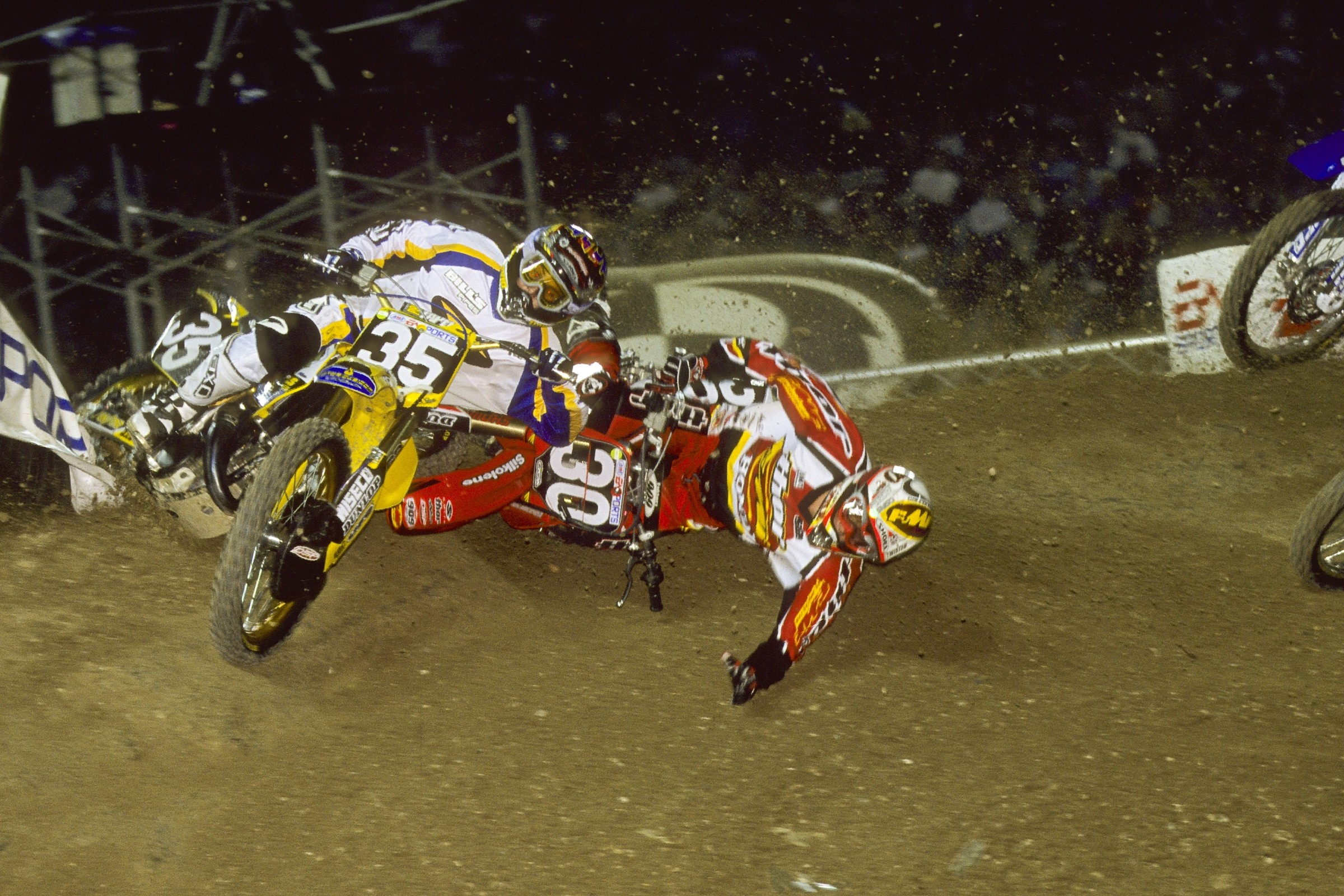 On This Day in Moto January 15

In Phoenix, on what happened to be Martin Luther King Jr.'s birth date, James Stewart, the only African-American ever to win the AMA Supercross Championship in the premier class (and he and his younger brother Malcolm are the only African-Americans to win 125/250 SX Regional titles), raced his San Manuel Yamaha YZ450F to the main event win over Monster Energy Kawasaki’s Ryan Villopoto and Muscle Milk Honda’s Trey Canard.

Prior to the start of the 1994 AMA Supercross Championship at the Citrus Bowl in Orlando, word was spreading around the industry that Jeremy McGrath, the defending series #1, had been working on a new “trick” that he planned to unveil as soon as the time was right. It was said to be a BMX-influenced trick that Jeremy knew from his days of riding with just pedal power, and he and another well-known jumper, Team Suzuki’s Guy Cooper, had been working on it while over in Europe for some international races during the off-season.

The time to finally unveil it turned out to be on the last lap of his heat race in Orlando, where, in mid-air, Jeremy threw his right leg back over his rear fender and his whole body was on the left side of the bike. The trick, of course, was the nac-nac, and it became his signature move. And because Jeremy had previewed the trick over another jump in practice, no photographers were around to record the actual moment!

The following week, I wrote in the back-page Cycle News column they called Racer X, “Try to picture that: Three stories above the stadium floor, the defending champion was hanging completely off the left side of his motorcycle. From the small spectator area behind the jump came the first roar of disbelief of the new season as McGrath flew side-saddle above them. Then the champ swung himself back over the seat and righted himself just a blink before landing… I sat there in disbelief, my camera at my side.”

Yet, shrugged McGrath himself to Cycle News race reporter Chris Jonnum, “It’s really not that hard.”

Later than evening, McGrath won the 250 main event aboard his Honda factory CR250, but he didn’t get to do his new trick—Kawasaki’s Mike LaRocco was following too closely. Finishing third was former three-time champion Jeff Stanton, McGrath’s older teammate.

At the Anaheim 2 Supercross at what was then called Edison Field, then-six-time series champion Jeremy McGrath raced his Yamaha to yet another Anaheim win in what was by then being called “the house that Jeremy built.” McGrath also won the series opener at Anaheim the previous weekend.

But in the 125 Class, a record was set: Pro Circuit Kawasaki’s Tallon Vohland won the 125 main event, his first AMA Supercross win since the 1991 Houston 125 SX. Vohland, who spent almost all the rest of the nineties racing in Europe on the Grand Prix circuit, laid claim to the biggest gap between 125 SX wins: nine years, 361 days. To put that into perspective, the last time Vohland had won a 125 Supercross, the rider who finished second was Jeremy McGrath!

Here’s the TV coverage, parts 1 and 2, which includes a big first-turn crash for our own David Pingree and FMF Honda’s Casey Lytle, and Motoworld Yamaha’s Greg Schnell. There’s also a fantastic finish between Vohland and FMF Honda rider Danny Smith.

Suzuki riders swept the Phoenix SX, and both aboard 250s. Ricky Carmichael got his first-ever AMA Supercross win while riding a Suzuki RM250 in the premier class, while Broc Hepler got his first professional win, as well as the first win for the Suzuki RM-Z250 four-stroke, in the 125 class.

How far have we come with our sport’s television coverage? The 1977 Carlsbad U.S. Grand Prix of Motocross was finally hosted on ABC's Wide World of Sports on January 15, 1978. The race took place on June 19 of the previous summer and was won by Suzuki's Gerrit Wolsink.

And over in Florida, the veteran Bob Hannah was still making it happen on a Suzuki RM250, winning both motos of the Florida Winter-AMA Series over Keith Bowen and Mike LaRocco.

Also, defending GNCC #1 Ed Lojak announced that he was leaving Husqvarna after 12 years and was switching over to a Yamaha YZ250WR, with full factory support.

Kawasaki riders Jeff Ward and Goat Breker swept the second round of the 1984 CMC Golden States/Skoal Bandits Motocross Championship at Hollister Hills in NorCal. Ward won in the 125 Pro and 250 Pro classes, which landed him on the cover of the following week's Cycle News.

And check out the top ten in the Mini Expert class that day:

Future FIM World Motocross Champion Hakan Carlqvist was born in Sweden. Among his big wins is one in America—the 1983 U.S. 500cc Grand Prix of Motocross at Carlsbad Raceway. Sadly, Carla died just last year after a stroke. He was 63 years old.