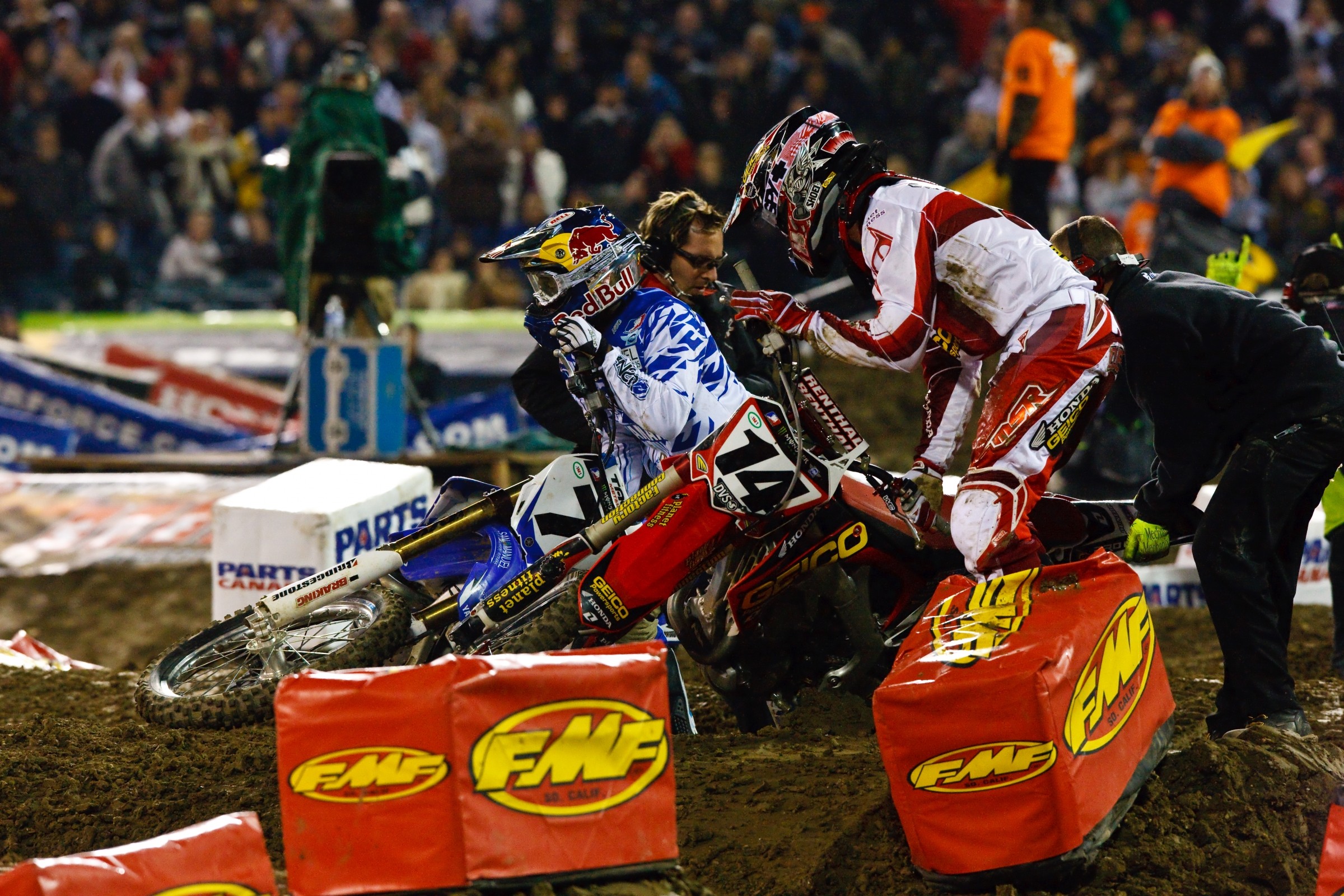 2018 began with a bust for title contender Eli Tomac—a busted zipper, actually. The Monster Energy Kawasaki rider's wardrobe malfunction, and possible shoulder injury from the crash that caused it all to go south in a hurry, reminded us of some other unexpectedly bad nights that bedeviled big hitters in Monster Energy AMA Supercross.

The Anaheim Supercross of 1986 is remembered by all as the most exciting supercross battle ever between Honda teammates David Bailey and Rick Johnson... well, almost all. For defending AMA Supercross #1 Jeff Ward, Anaheim '86 was a nightmare, as a broken throttle cable knocked him out of his last chance to qualify. Wardy was so mad he left the stadium early, and he later said he was in the nearby Del Taco drive-thru on Orangewood Avenue and could hear the crowd screaming for that Bailey/Johnson duel.

Rick Johnson ended up winning that '86 title, but the next year it was his turn to start off badly. He crashed early in the Anaheim SX opener and knocked himself out. This time it was a dream night for Kawasaki's Ward, who avenged himself from the previous year's DNQ and went on to win the AMA Supercross title for a second time. There were 21 riders in the main event, and Johnson finished 21st, which meant no points. Coincidentally, the 20th-place rider was riding his very first AMA Supercross on a Yamaha YZ250. His name was Jeff Stanton, the man who would ultimately replace Johnson as Honda captain after RJ's unfortunate wrist injury in 1989.

Jean-Michel Bayle didn't exactly have a horrible night at the '92 opener, but the defending champion rode an obviously uninspired race in Orlando's Citrus Bowl to a sixth-place finish. The problem was that his Honda bosses Dave Arnold and Roger DeCoster knew that he was no longer focused on SX/MX, as he had already turned his mind over to his future road racing career. JMB would show flashes of his old brilliance that year, but his days as the fastest man on the planet were behind him—and by choice. Had he stayed focus on supercross for another year or two, it's mind-blowing to think what kind of battles he and the soon-to-arrive Jeremy McGrath would have had in 1993.

The San Jose SX was actually held at the end of the 1993 AMA Supercross schedule, but it had an extra boost due to the fact that Kawasaki Team Green's prodigy Robbie Reynard had just turned 16 and was making his AMA Supercross debut. (One week earlier, he finished seventh in his first pro race, the High Point 125 National.) Reynard, armed with a long-term Kawasaki and Fox Racing factory contract, didn't make it through the main event before casing a jump and snapping his wrist, beginning a string of injuries that would rob him of many, many chances at race wins and titles. He never did win an AMA Supercross main event in either class.

Jeremy McGrath's much-hyped debut on a Suzuki, after four straight title-dominant seasons with Honda, got started with a collision with his former teammate Steve Lamson at the Los Angeles Coliseum. McGrath placed 15th, his worst-ever finish to that point in a nighttime supercross. (McGrath was 20th at Daytona in 1992 when he was actually riding the 125 West Region for Team PEAK/Pro Circuit Honda.) Ironically, the winner that night at the LA Coliseum was a Suzuki rider anyway: Greg Albertyn.

The Vault shows Ricky Carmichael's first-ever AMA Supercross as coming on January 18, 1997, at the second Los Angeles Coliseum race in the 125 West Region. That's true, but with an asterisk: Carmichael and the Splitfire/Pro Circuit Kawasaki team used a loophole to let him get some track time in before his real series—the 125 East Region—started in February. So long as Ricky didn't get more than 25 points, he could race (a rule that was soon erased from the books). So, he went out and finished 11th on that famous night that Moto XXX privateer Brian Deegan won and ghost-rode his bike off the finish line. The race Ricky was expected to win—the Indianapolis 125 East Region opener—went much worse. Riding wild and without a lot of fear, RC ended up crashing often and even snapped his handlebars in half. He would DNF his first "real" 125 SX race, but was credited with 19th.

Ricky Carmichael ended the '01 season with 13 straight wins for Team Chevrolet/Kawasaki, then made a controversial decision to switch to Team Honda. His first night at Anaheim ended with a spectacular over-the-bars crash that left him concussed, cut up, and on the back of Doc Bodnar's Mobile Medics Mule. It would take a few races for RC to get his speed and confidence back, and he successfully defended his title despite that last place finish at A1.

The man that Carmichael had dethroned the previous season, Jeremy McGrath, was debuting his own Bud Light Yamaha and had a rather forgettable night, admitting to a rare case of arm pump after struggling to finish 13th after a bad start and a mid-race spill. Also, that same night marked Suzuki's Travis Pastrana's first full-time foray into the 250cc class after two years as a 125cc rider and only a couple of 250 SX cameos. This time, Pastrana tangled with Honda's Ernesto Fonseca and had many of the spokes ripped out of his front wheel, forcing him to an early DNF. All told, the three best known riders in the race—McGrath, Pastrana and Carmichael—went 13th, 19th, and 20th in that opener.

The "Perfect Storm" kicked off the 2005 AMA Supercross Championship, as well as a real storm. Angel Stadium in Anaheim was submerged in rain and mud as the looming battle between defending champion Chad Reed and back-from-injury Ricky Carmichael, as well as newly-moved-up James Stewart, and even wild cards like the semi-retired Jeremy McGrath and the freestyling Travis Pastrana made for a lineup of potential storylines. In the end, it was the superb mud rider Kevin Windham who won, while defending champ Reed got stuck in the mud, had to change goggles and gloves, and ended up a lowly 16th. He would give the title back to Carmichael, who finished third that opening night, by 25 points.

When Ben Townley moved to America from New Zealand (by way of Europe), many had him pegged as Ricky Carmichael's heir-apparent. They were friends, and RC, who was on his way out to retirement, was BT101's mentor from the time he landed. Townley had more than his fair share of injuries, but 2007 was shaping up as his year in the 125 East Region. The opening round was in Atlanta's Georgia Dome, and it would mark not only Townley's SX debut, but Carmichael's Makita Suzuki teammate Ryan Dungey’s as well. Townley's engine ended up blowing halfway through the main and he ended up with a 22nd-place finish. Dungey, on the other hand, ended up winning in his first-ever AMA Supercross. But as the weeks went on, Townley fought back and eventually won the 2007 125cc East Region AMA Supercross Championship, despite his disastrous start.

James Stewart missed most of the 2008 AMA Supercross Championship with a knee injury, which opened the door for a second title for Chad Reed. But Reed parted ways with his San Manuel Yamaha team, which hired Stewart away from Kawasaki instead. Chad signed with Suzuki and the opener was more like a grudge match between the two bitter rivals. It got crazy when Reed ran into Stewart's back wheel in the whoops and both went down. The closely following Kevin Windham then hit the downed Stewart, adding to the craziness. The beneficiary of it all was JGR Yamaha's Josh Grant, while Stewart ended up a frustrated 19th. He would still rebound to win the title from Reed with four points to spare in a great season-long battle.

Monster Energy Kawasaki's Ryan Villopoto was already a two-time AMA Supercross Champion and the favorite for a third in '13, but then crashed himself back to 16th in the series opener at Anaheim, leaving him in quite the hole. However, within two weeks, RV was winning mains and would recover in points to retain the title.