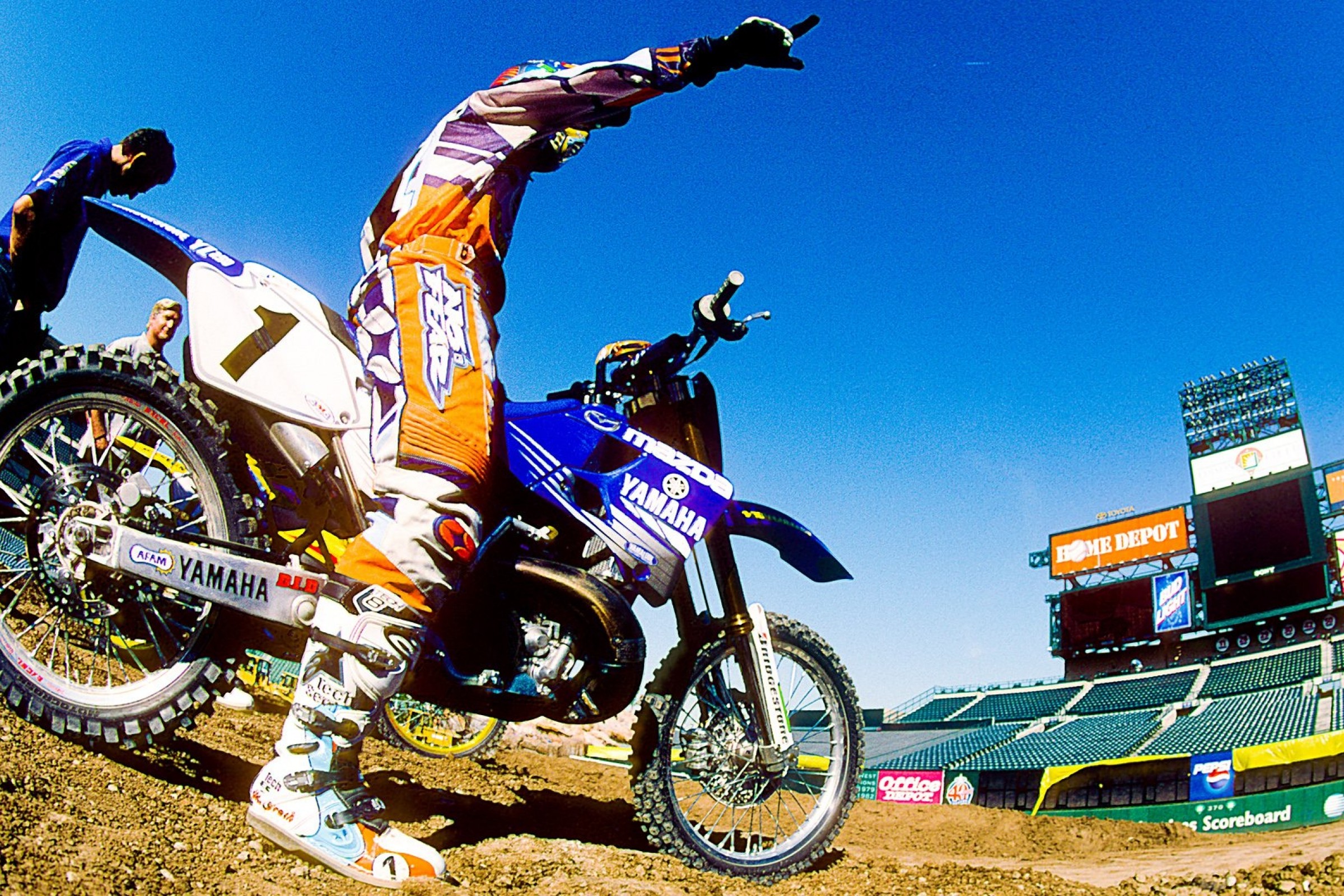 On This Day in Moto January 6

Future multi-time FIM Motocross World Champion Georges Jobe is born in Retinne, Belgium. In the early eighties he was signed by Suzuki to help them claim the 250cc World Championship that they had not captured since Joel Robert, another Belgian, last won it in 1972. In 1980 Jobe got the job done, before his 20th birthday. But in the next two years he would narrowly lose it, first to British Yamaha rider Neil Hudson, and then the next year to U.S. Yamaha rider Danny LaPorte. Jobe would finally get the title back in 1983, beating LaPorte in his last year in the class.

In 1984 Jobe was hired by Kawasaki to race 500cc GPs and hopefully earn them a first world title in that division. Jobe did not win, but he at the British round at Hawkstone Park he used his U.S. supercross-influenced skills to launch what was called the crater to literally jump over the head of his rival and fellow Belgian Andre Malherbe. Photographer Nick Haskell's shot of the moment is one of the most iconic photos in Grand Prix history.

Jobe would eventually win three FIM 500cc Motocross World Championships—'87, '91 and '92—but they were all on Hondas. After his career Jobe was paralyzed for a time after a crash while doing schools in Dubai, and then in 2012 he passed away from leukemia at just 51 years of age.

Mazda Yamaha's owner/rider Jeremy McGrath wins the 71st main event of his career with a win at the opening round of the 2001 AMA/EA Sports Supercross Championshilp at Anaheim's Edison International Field. The seven-time and defending champion, wrenched once again by his former Honda factory mechanic Skip Norfolk, led the whole way for the seventh Anaheim 250 SX win of his career. Team Honda's Ezra Lusk finished second, with Chevrolet/Kawasaki's Ricky Carmichael third.

"I just need to do that every weekend and throw in some race wins, and I think it's going to be a good championship," said Carmichael, who at that point had a grand total of one AMA 250SX wins. "I feel like I am getting into more of a routine in supercross. When I go to the line I know what I need to do rather than getting there and having a question. I believe deep down that I've got what it takes. It's going to be a battle. I don't want to be a second- or third-place guy, but in order to win this championship that's what it's going to take."

In the 125 Class Yamaha of Troy's Ernesto Fonseca debuted the new YZ250F for the first time in AMA competition, and Yamaha was so certain he would win that they built and reserved a place for a Cycle News win ad before the race. After all, Yamaha was the only brand with a 250 four-stroke at the time, and the AMA allowed it to race despite the fact that it was obviously faster. (Privateers Matthieu Lalloz and Keith Johnson also had their own YZ250Fs out there.)

Fonseca ended up obliging his team's trust with a victory in the bike's debut. Needless to say, it drew the ire of Suzuki's Roger DeCoster, who watched his rider Danny Smith get outgunned on his RM125 only by Fonseca's 250F.

"I've always said that it doesn't make sense," said DeCoster of the AMA's decision to allow the "double-displacement" advantage for the coming line of lightweight thumpers, telling Cycle News' Chris Jonnum, "That bike should not be there (in the 125 class). I think it has the potential to destroy the 125 class. I'm not blaming Yamaha; they built a great bike. They saw the loophole in the rule, and Yamaha decided to build a 250 for it, but how much sense does it make when the announcer is going, 'Fonseca is leading the 125 class on his YZ250?'"

Ricky Carmichael begins his final season of racing as a part-timer, aiming to compete in a half-dozen AMA Supercross races and a half-dozen AMA Motocross races as a farewell of sorts. But at Anaheim he comes out swinging against expected title rivals James Stewart and Chad Reed, knowing that this would be his last chance to win the Anaheim SX opener. In a thrilling main event, the three battled back and forth, with first Stewart falling while in the lead, retaking Reed and Carmichael, and then Carmichael fell off going all-out after Stewart. James would end up winning on the #7 Kawasaki, with Carmichael second and Reed third.

The Lites class offered a glimpse into the future as Monster Energy/Pro Circuit Kawasaki's Ryan Villopoto took the win over the visiting MX2 World Champion Christophe Pourcel of France, who was making his AMA Supercross debut. Finishing third? Yamaha of Troy's Jason Lawrence.

Today marks the beginning of the 45th Monster Energy AMA Supercross Championship and the 71st Anaheim Supercross race. Anaheim has been on and off the schedule since 1976, and usually with multiple events, as it is located in the heart of the American motorcycling industry.

Today also marks the start of the Dakar Rally in South America, and lining up for the first time will be a former supercross star, as Andrew Short is now a full-time adventure ride with the Rockstar Energy Husqvarna Rally Team. The Dakar Rally will take him to Peru, Bolivia, and Argentina. Good luck down there, Shorty!