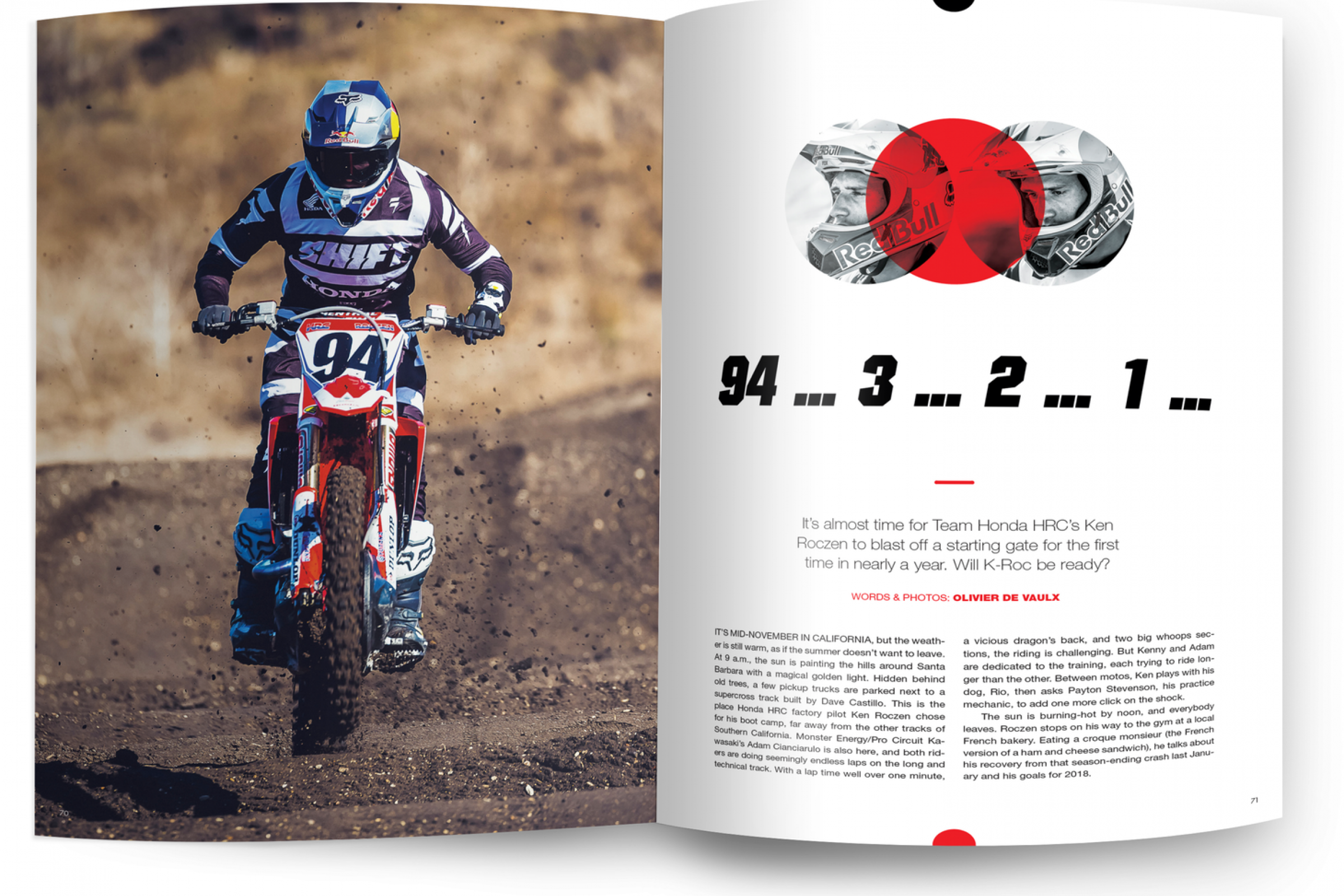 Pick up your copy now and read about our talk with Ken Roczen and his comeback, why Red Bull Straight Rhythm needs two-strokes, and Forrest Butler's championship contending race team. Also read about Ping's day at Washougal for some 125 Dream Racing, and Jerry Deleo who owns and operates the factory test tracks for each of the Big Six manufacturers.

When I first came to Ken Roczen's new house in late 2016, the young rider had just switched to Honda from Suzuki. Setting up the interview was surprisingly easy. I just had to send an email to Ken, who answered right away. Being successful didn't alter the young man's polite manners. He had a very genuine attitude, offered honest answers, and was a very pleasant host. That afternoon in Florida went too fast, as is always the case when you have good time with nice people.

All the stars were aligned for the young German at that point. He was moving with his wonderful girlfriend into a lovely house near a lake, had just received his new Audi R8, and was ready to kick everyone's ass in 2017 on his new CRF450R. And during the beginning of the 2017 season, Ken was indeed winning, while still keeping his good mood and finding some time to share a joke with the people around, including journalists. He was the perfect incarnation of happiness, until his crash at Anaheim 2 wiped out everything.

Over the next few months, Kenny went through unthinkable pain and shared unbelievable stories about his surgeries. In the meantime, Ryan Dungey won the 450SX Championship before retiring, leaving Eli Tomac, Blake Baggett, and Marvin Musquin to fight alone for the Lucas Oil Pro Motocross title. Overall it was a great season, but with some lack of passion, like when one of the main characters on a TV show is suddenly written out of the script. The day Kenny posted pictures of him riding a dirt bike again, hope bounced back as everybody started to dream about the 2018 season. K-Roc was back, and doing an interview with Ken became a mandatory task for every journalist worth his press card.

But this time, setting up the meeting was a different story. I needed to go through Ken’s management, Wasserman Media Group. All said and done, everybody worked together to make it happen. Two months later, persistence paid off and I finally received the green light to meet Ken in Santa Barbara, California. I didn't know what to expect, both on the riding side and the human side. Lost in my thoughts, I managed to miss the "secret" supercross track entrance twice, despite the fact that it was located on a narrow road with not much around. I eventually had Cassie, from Wasserman, give me directions over the phone to find the spot.

Parking near the pickup trucks, I found Kenny and Adam Cianciarulo teasing each other the way teenagers do in high school. A bit relieved to see Roczen in such a good mood, I watched them ride and share good times while I shot pictures in the background. As soon as the training session was over, Ken spontaneously proposed grabbing lunch together. We went to a local French bakery, a place that he might have picked just to please me. The talk was easy, honest as usual, friendly as it has always been. Despite all the challenges he went through, Ken Roczen was still the same, just more mature and more focused on winning than ever.

The full story can be found in the February issue of Racer X Illustrated, and will leave no doubt in readers’ mind about the upcoming season. Subscribe today.