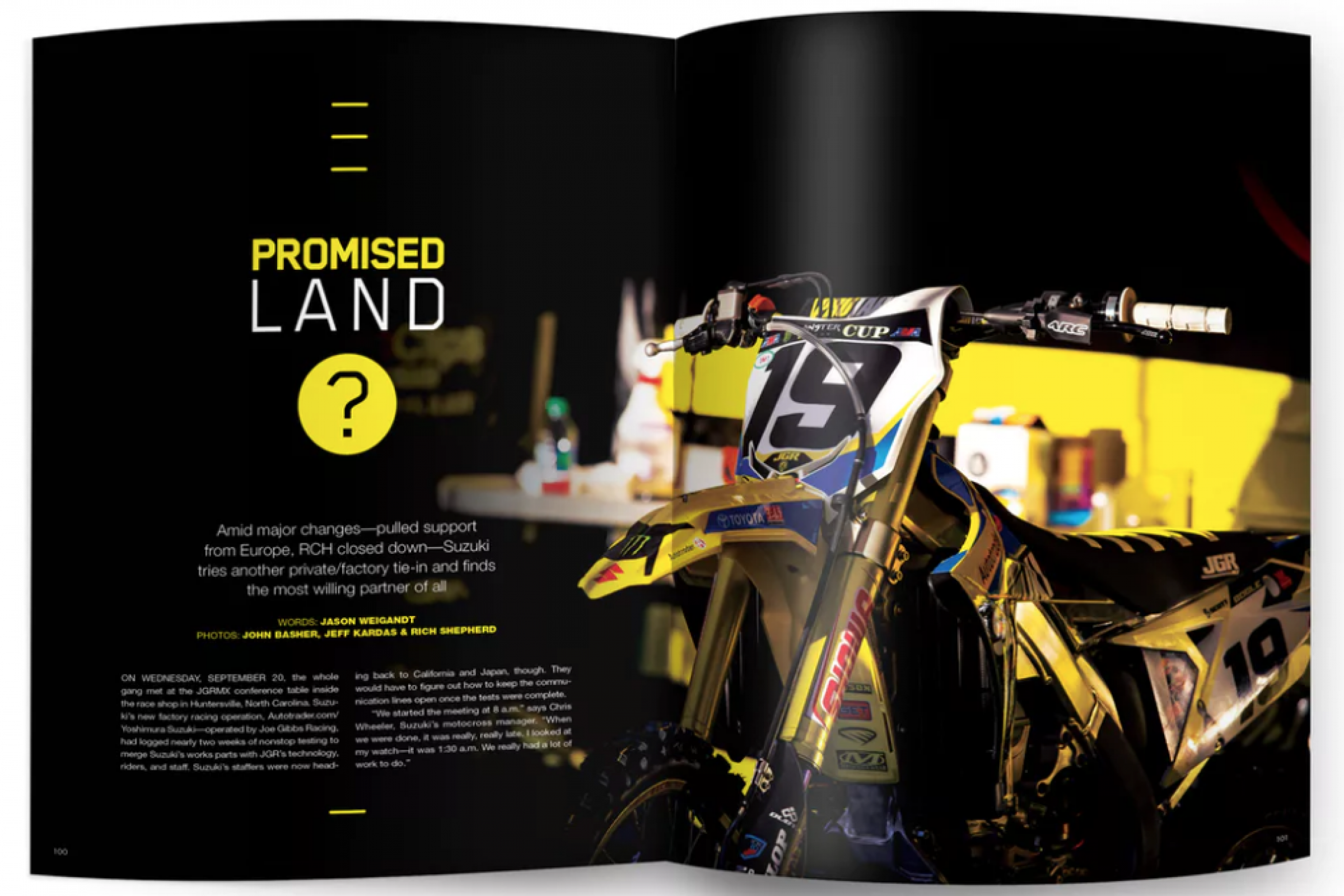 In the Mag, Promised Land?

You can read Jason Weigandt’s look into JGR’s new factory deal, “Promised Land?” in the January 2018 issue of Racer X Illustrated. Subscribe now to read it, as well as stories on Zach Osborne's long-overdue breakout season and DC’s look into Team USA struggles at the Motocross of Nations. Also read about Justin Barcia facing an uncertain future on his privateer Honda, and our Holiday Gift Guide with the best moto gifts from across the industry.

At the AIMExpo back in late September, we ran into Suzuki motocross boss Chris Wheeler and started pressing him for info. We wanted to know what riders the Autotrader.com/Yoshimura Suzuki team, run by Joe Gibbs Racing, would sign for its expanded 250 effort. Wheeler explained that those decisions would have to wait, because there was still so much to do in order to integrate factory Suzuki’s race effort—based in California since day one—into JGR’s North Carolina operations base. Wheeler had worked through nearly two weeks of round-the-clock meetings at the JGR shop and long days at the test track, alongside JGR staff and Suzuki employees from California and Japan. The day before he came to the tradeshow, Wheeler was in a meeting that started at 8:30 a.m. and didn’t end until 1 a.m.

Wow. What the hell where they talking about? How hard could this process possibly be?

To answer those questions, Wheeler and JGRMX team manager Jeremy Albrecht agreed to give us unprecedented insider access. The next week, I headed to JGR shop in Huntersville, North Carolina, and saw the conference table jammed with familiar faces from the races—some Suzuki folks, some JGR staff—all in little groups. Laptops were open and heads where huddled around each other, suspension guys teamed together, engine guys at another, chassis and hard parts guys at another. Wheeler, Albrecht, and Yoshimura’s Don Sakkakura roamed around. The team, with riders Weston Peick, Justin Bogle, and Phil Nicoletti, had just wrapped two weeks of testing, and the team was now placing the final orders for 2018 works parts from Japan.

Albrecht and Wheeler moved to a separate room and let me hit the record button and ask them about the process. Albrecht explained over and over that Suzuki had provided more guidance and help from the engineers in Japan than the team’s previous OEM partner, Yamaha. Wheeler talked about the challenges of rebuilding Suzuki’s motocross fortunes, especially after the brand was dealt another hurdle when RCH shut its doors. With RCH, Suzuki learned the process of using a private operation to run the factory race team, but JGR was taking another step by anchoring the group in North Carolina. In many ways, JGR and Suzuki learned to trust each other during the 2017 season, and now, for 2018, they have to learn how to work together.

In the January issue, I outline how they plan to make that happen. Subscribe and read today.