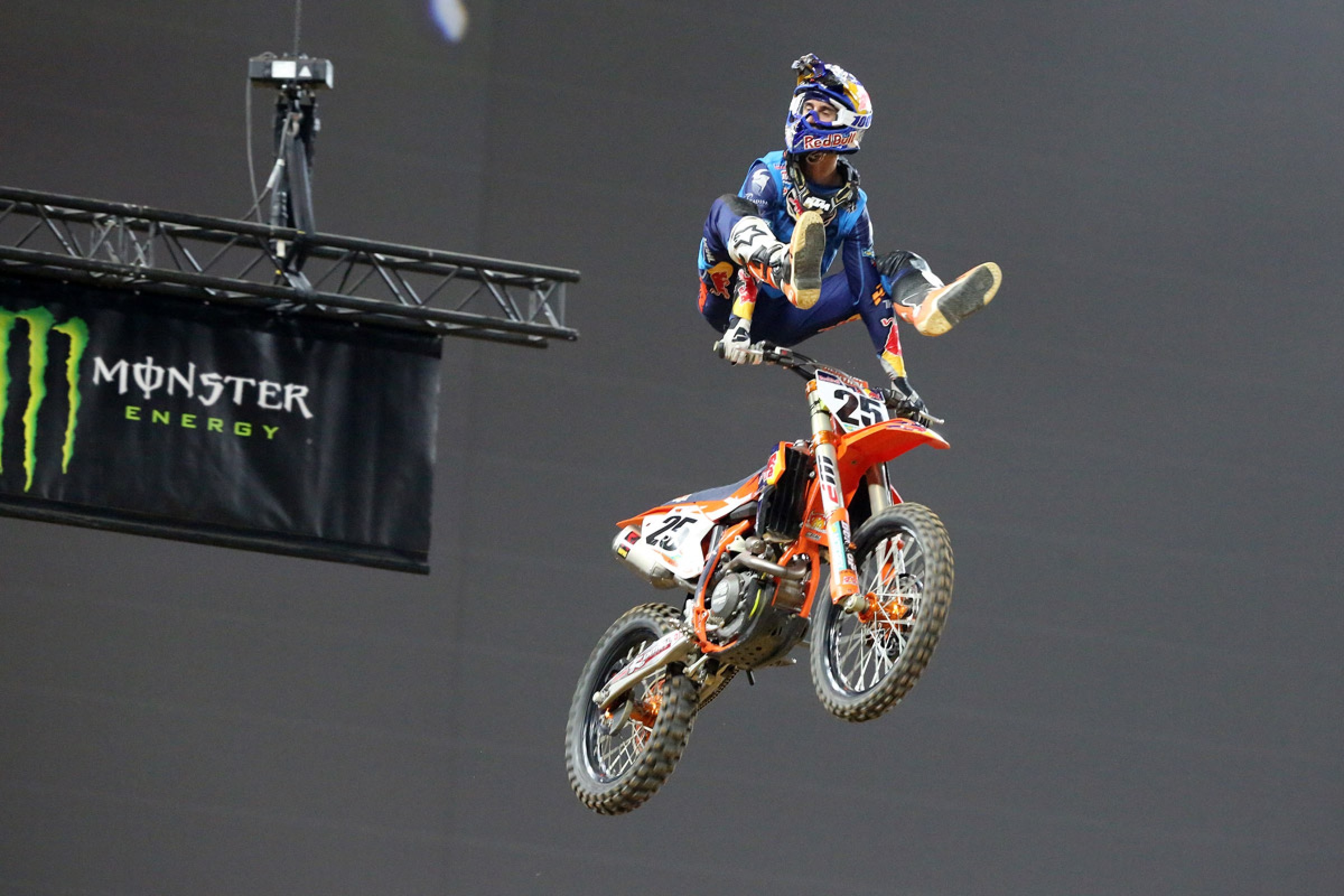 For the second year in a row Red Bull KTM’s Marvin Musquin took home the King of Paris crown. After winning on Saturday, Musquin dominated for a second straight night in Paris. Musquin lost only one race all day—Honda HRC’s Cole Seely beat him in one of the Sprint finals. Musquin won the Superpole contest, the first Sprint race, lost the second Sprint to Seely, and then won the final main event.

Musquin had early pressure from Seely in the 15-minute plus one lap main event and it looked to be a repeat of the race before with Musquin seemingly trying a different line in the whoops each time. Seely pulled up very close to Musquin but full credit to the hometown Frenchman for buckling down and pulling back away from the Honda rider.

Musquin didn’t need to win the last final to clinch the crown for the weekend but it was big improvement from him after seeing Seely come from third to run him down and pull away in the second Sprint final on Sunday.

“It was challenging this weekend, the track was tough the berms were blown out and there were no ruts,” said Musquin. “It was tough. The turn before the whoops, it was very open to I didn’t want to get passed so I go inside and can’t carry speed in them [whoops]. I got better for the main. I tried everything in there [the whoops] and it was good to have some choices.”

Here are more notes from Sunday:

- Seely tied Rockstar Energy Husqvarna’s Dean Wilson for second overall and like Wilson, he was able to beat Musquin once. Unlike Wilson, who needed Marvin to make a mistake yesterday to win, Seely was able to catch and pass Musquin. Afterward Seely mentioned that he felt they learned something on the bike and that Musquin got better in the whoops more than he fell off.

- Starts, starts, starts for Wilson on Sunday as he was unable to get good enough ones to challenge Musquin and Seely. He rode well all weekend long and 3-3-3 finishes on Sunday meant that Seely was able to pass him for the runner-up position.

- Speaking of starts, Wilson’s teammate Zach Osborne fared even worse after a very good second in the main last night. Osborne collected the most passes on Sunday as he worked his way up from the very back of the pack in two out of the three races. Fourth overall on the weekend for Osborne, he spoke about not feeling 100 percent uncomfortable on the bigger.

- Jeremy Martin missed yesterday with a wrist injury, but thankfully it was good enough to ride today. He did just one practice session, which meant J-Mart was forced to try and get up to speed quickly. Not happy with his whoop speed, Martin got better every time he got on the track and by the final main event he ended up fifth.

- RJ Hampshire didn’t have the weekend he would’ve liked but he came from Australia last weekend and with bad starts (although he mentioned that perhaps he didn’t want to get up because he knew it would be tough to maintain the pace) and crashes, he had a grueling weekend on the GEICO Honda 450.

- In the SX2 class, it was Bud Racing Kawasaki’s Tyler Bowers that took the main event win. Bowers got a so-so start and it would’ve been tough for him to recover but there was a red flag thrown. His second go at it was much better. Bowers tracked down leader Thomas Do with superior whoop speed to take the win. His 4-1 main scores were enough for him to end up second overall on the weekend behind Do.

- Musquin was the big star of the weekend with his wins and it also keeps his perfect off-season going, what with the million bucks won at the Monster Energy Cup, and then winning Red Bull Straight Rhythm. Musquin emerged last year as a potential “next” in the 2018 Monster Energy Supercross title chase and this off-season, on a new KTM 450 SXF they’re still working on, he’s got some serious confidence going.