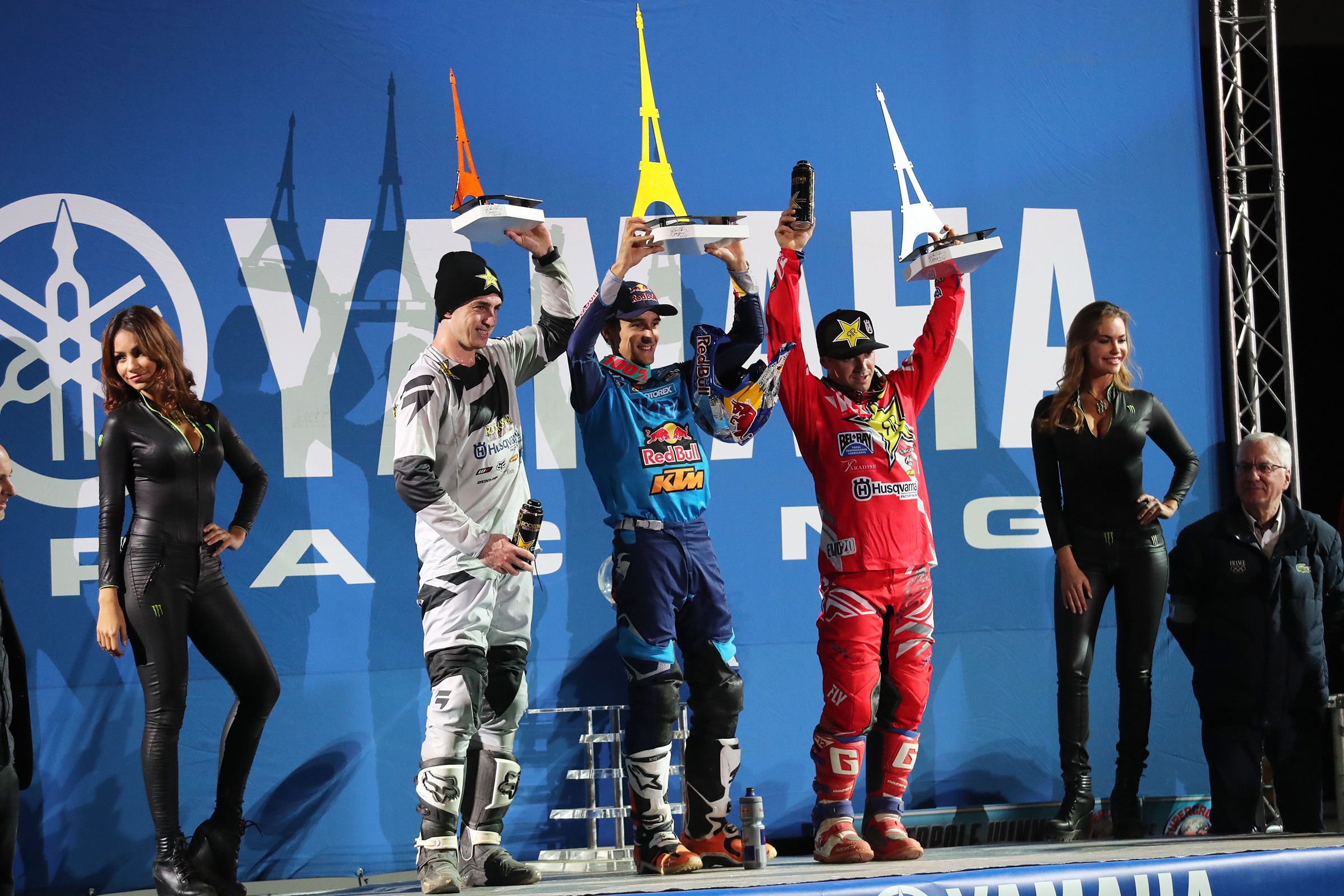 Red Bull KTM’s Marvin Musquin was the big winner last night in Paris, France, in front of his hometown fans with a wire-to-wire win in the main event. This race, for years named Bercy SX, then Lille SX (a town about an hour north of Paris), and now it’s back downtown Paris. A very near capacity crowd loved the fact that the Frenchman took home the win in the Superpole event, a second in the first sprint race, won the second sprint race, then, as we said, was never headed in the final. All the races last night and this afternoon count towards your “King of Paris” status, so it’s important to keep up the results every time you head out on the track.

Let’s get to some important info:

- As stated Musquin was untouchable in the main event but he was caught by Rockstar Energy Husky’s Zach Osborne at times just past halfway. Osborne rode a great race with a second off the start and hung with the Frenchman for longer than most would think. Musquin’s race night started with an amazing Sprint one race that saw Osborne’s teammate Dean Wilson catch and pass Musquin a couple of times. Then with about two laps to go, Musquin got squirrely off the dragon-back and shot off the track. That was all Wilson needed to take the win with Honda HRC’s Cole Seely in third. All three riders were so close and Wilson, while better in the whoops, lost time to Musquin in some flat turns. So Musquin leads the pack with 1 (Superpole)-2-1-1 scores into night two.

- Cole Seely fell in the first turn in the main event and was way back off the start. He worked hard to make it all the way back to fourth after some battles with Honda’s Fabian Izoird and Suzuki’s Cedric Soubeyras. It was a lot of work for the #14 to salvage a decent result. 2-3-2-4 scores leave Seely third overall after night one.

- First time racing SX on a 450, Osborne got better and better every time out. Fifth overall in practice, Osborne finished fourth in Superpole, fourth in the two Sprint races and then as mentioned, rode amazing to get runner-up in the main event.

- GEICO Honda’s RJ Hampshire, who was scheduled to race a 250 here, jumped to the 450. He had bad starts and crashes on Saturday. Hampshire mentioned that his suspension was a tad soft as it was his 250 stuff but nevertheless was fighting gamely in each main just inside the top ten.

- His teammate Jeremy Martin crashed in the whoops in practice and hurt his wrist. Unfortunately, Martin was forced to withdrawal from the event and will try to practice today and see how it is. Before that he ran top three practice times and looked comfortable.

- Seely’s here on his full CRF450 factory bike as is Musquin. The ICE One Husky team has supplied bikes for both Osborne and Wilson so they’re virtually identical to what they race in the U.S. Hampshire and Martin are on production bikes with goodies added on such as suspension, bars, pegs, etc.

- The floor of the new U Arena is much bigger than Bercy and allows for an almost full-size supercross track. The track itself broke down pretty good by the end of the night and although not Anaheim 1 slick, it got hard and dry to come close to the SoCal-type of dirt. As far as the obstacles, everything was fairly easy for the guys but the whoops were tough.

- Tyler Bowers was here racing in SX2 for Bud Racing Kawasaki. Bowers won his heat, got a sixth place finish in the main event and was forced to work his way up to fourth, a long ways back of leader Thomas Do and eventual winner Yannis Irsuti, who had a titanic battle that ended up with both riders on the ground with one turn to go! Irsuti took the win with Do second. Bowers did have a bit of a stuffing battle with another rider that he eventually sent off the berm all arenacross-style.