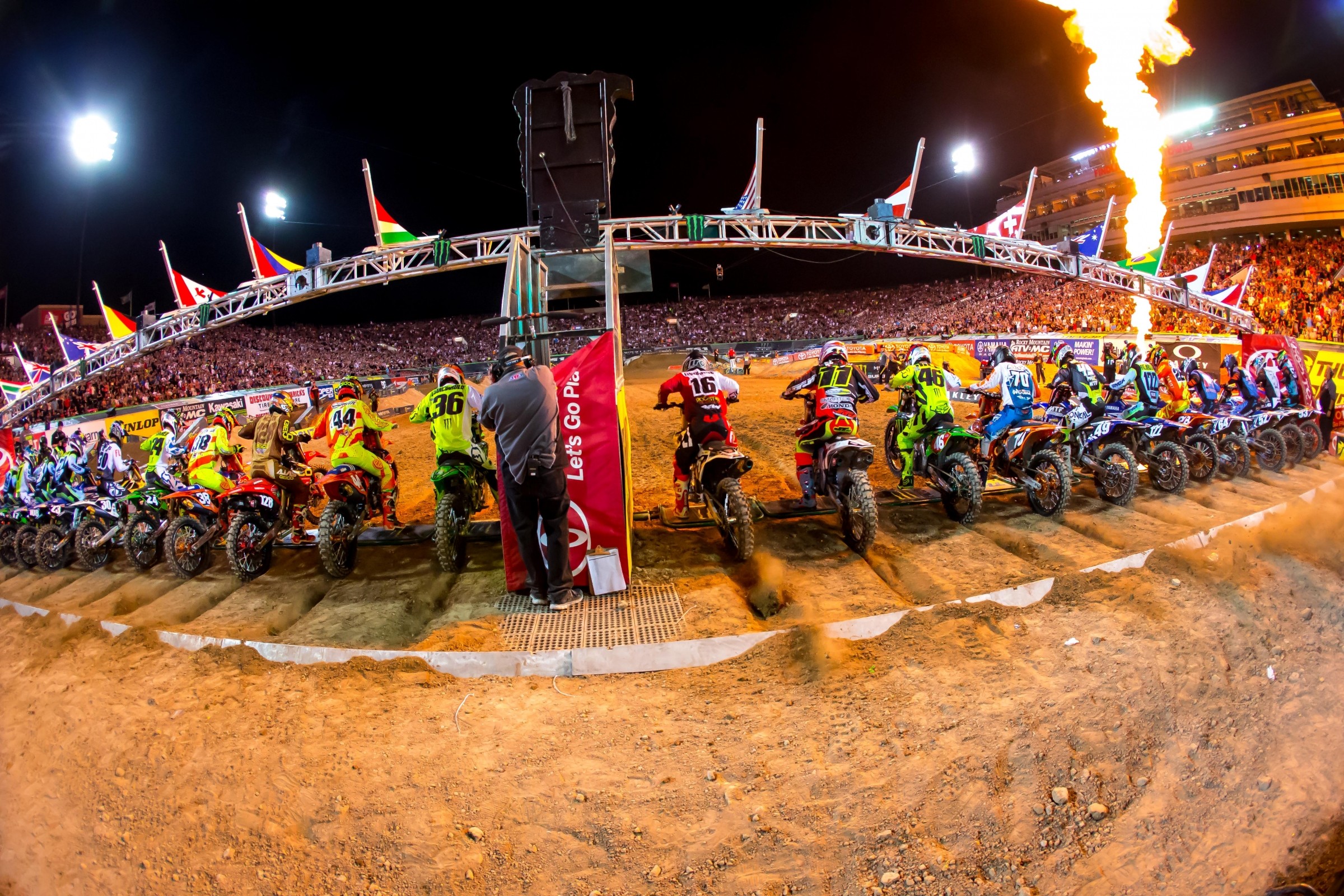 Yesterday, Feld Entertainment announced changes for the 2018 Monster Energy Supercross Championship. The changes aren’t so massive as to completely change the sport from the inside out, but they were large enough to cause a bit of confusion at first glance.

You can look at this post from yesterday to find Feld’s complete guide to it all, including info-graphics and videos explaining each change.

To make it even simpler, we dug in to answer the questions we’ve heard most since yesterday.

The Triple Crown consists of three races using a version of the Monster Energy Cup format—three main events for 450SX and 250SX. These events are part of the regular 17-round Monster Energy Supercross Championship and will take place at rounds 3 (Anaheim II), 9 (Atlanta), and 14 (Minneapolis).

2. Is the Triple Crown a separate series?

The real upside? The top riders will be out on the track and racing for points much more at the events using this format.

3. How do they calculate points for Triple Crown events?

Points are based solely on the overall finish at the end of the night. Do not think about the “points paid per moto” idea that motocross has used for decades, that’s not how this works. If a rider, for example, goes 4-3-4 for fourth overall, he gets fourth-place points for the night. Same amount of points for finishing fourth in a traditional 20-minute main event.

This prevents the Triple Crown races from having too much influence on the championship. Imagine if all three mains counted for individual championship points and a rider crashes in practice and misses the race. That would be the points equivalent of missing three whole weeks of racing under the standard format. Here, the damage would only be the same as a regular supercross round.

4. How long are the Triple Crown races?

In a twist, even from Monster Energy Cup, the three main events have different lengths. First 450SX main is eight minutes (plus a lap), second is 12 minutes (plus a lap), the third is 15 (plus a lap). This equals 35 minutes of actual racing that counts for points, much more than the 20-minutes plus one lap at a regular race. Further, that 15-minute (plus one lap) final main is longer than most of the 20-lap 450SX mains before 2017.

5. What about a chase/playoffs format?

Look, when you read the headline “Big changes coming to Monster Energy Supercross” you started thinking about a chase or playoffs format, didn’t you? That’s been in the rumor mill for years, especially since Amsoil Arenacross uses that points structure.

It’s not happening for 2018. We believe Feld is still considering it for the future, but in 2018, every race will count for the championship, as usual.

It’s not a radical change, just moving a point or two around from the old points structure. Here are the two big differences: In the old format, there was a nine-point gap between a first and a fifth. Now, there’s an eight-point gap. That means there’s slightly less penalty for a rider having a slightly off night.

Conceivably, it means a rider doesn’t fall into such a huge hole early in the season if he has a bad race. If a rider goes 5-5 to start the season, he would now be down 16 points if another rider starts with a 1-1. Under the old format, that rider would be down 18 points. If he can win a few races, he's slightly closer to getting the points lead.

7. How are the 250 East/West Showdown races going to work?

The Dave Coombs Sr. East/West Showdown in Las Vegas remains just as it ran in 2017. East and West riders will go head-to-head in the main event, and you score points for wherever you finish, regardless of which coast you ride. For 2018, a second race has been announced, using the same format, in Indianapolis. East and West will meet up, and score points based on where they finish.

8. Amateur supercross? On the same gnarly tracks as the pros?

No. Amateur supercross racing will take place on Sunday after the big show. The tracks will be tamed overnight, don’t worry. Supercross’ history has featured plenty of amateur races on Sunday, and they’re generally safe.

9. What about two-strokes? Electric bikes? Jumps over shark-infested waters?

Calm down. Yes, these changes are not mind-blowingly radical, but it’s a start. Supercross has seen very few changes since its inception, so consider this an experiment to see how the world responds to a few tweaks. If this ushers in a culture of change, then perhaps bigger moves will come in the future.