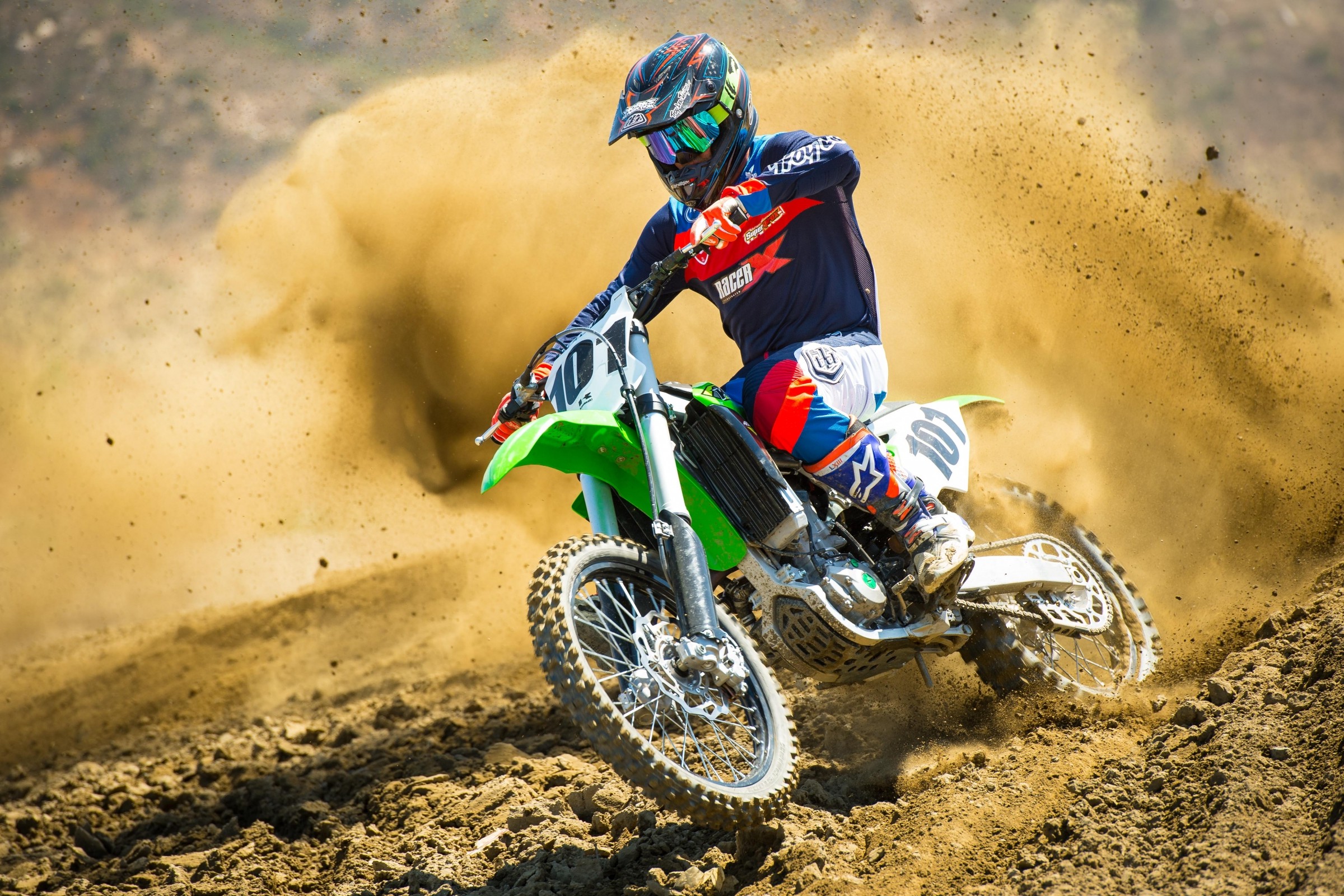 Dazed and confused (could be from multiple concussions).  I have been watching your dialed in video’s and have noticed you mention a few time about keeping the stock gearing.  You have stated that if you go up a tooth on the rear you will bind the suspension.  My understanding of going up a tooth or two on the rear sprocket is so you can ride a gear higher, which to me would be less of bind or load on the suspension.  Don’t worry Ping, I still believe in you over the orange helmet guys.

Side Note:  Back in the early 2000’s I was at an open practice at the original Diamondback MX in Modena, NY and I saw two Honda 125’s ripping around the track.  It turned out that it was you and Travis Elliot on your Plano Honda’s.  Nothing like the sound of you guys ringing out those bikes but I bet you went up a tooth or two on the rear sprocket.  Just saying!!!!!!!

Thanks for watching, Nick, I really appreciate it. I understand where that could be confusing so I’ll try to clear it up. Bikes all have a certain RPM range where they make most of their power. Some come on a little sooner than others and others rev further than some. But there is a sweet spot that we, as riders, try to stay within. Most guys, especially in a race, will revert back to the way they have always ridden in terms of technique and habit, regardless of what changes you make to a bike. So, you might tell yourself on the start line that you need to ride a gar higher because you went up a tooth on the rear sprocket. But most times you’ll forget that and end up riding/shifting/revving exactly the same way you have been and you’ll be in a much higher RPM range most of the time. That is where the binding comes from; as the engine winds tighter and tighter the rear of the bike is unable to work properly. The only time you should add teeth to the rear is if the track is so tight or you are so slow that you are stalling the bike in second gear through the turns. I’m not trying to be an ass when I say that either; as long as you aren’t stalling the bike in second, leave the gearing alone. Modern bikes have so much torque that it isn’t necessary to run the high RPM’s of our two-stroke past. Lug the engine, stay away from the clutch, and use the throttle and gearbox to control power. Hope that helps.

I remember that day in New York … Diamondback was rad! What a fun track. The good old days for sure.

I will make this short and sweet. WE [the true motocross fans] are sick and tired of seeing the same retreads coming back to race the 250 class. I will not even mention all the names, because it is not personal. I get the fact that they can make a living in the 250’s [GOOD FOR THEM}, so I don’t want to hear the same old BROKEN DOWN STORY!!! Until we have an age out rule like in Europe where rider’s develop and move on, we will continue to get our ass’s kicked in the DE ‘nations for the foreseeable future. I don’t understand why people can’t see this!  The true race fan is tired of the same two riders winning in both classes and deserves better! Not to mention the fact as these rider’s age, so does their SPEED. That means another ASS whooping next year at Red Bud!!!! The sport is dying, and it’s dying with the SAME OLD RIDER’S!! Ping, hopefully you can answer me honestly, without having to kiss anyone’s A - -      Looking for a REAL racer’s opinion.

Thanks for your time,
Roger Towson, Md.

Lots of exclamation points and bold letters here, pal. The first thing you need to do is take a few deep breaths so you don’t have a stroke right there at your computer. Try counting backwards from ten or something. Feel better?

Ok, I understand you want to see more riders up front in the premier class racing for wins—it’s a great notion. But that isn’t how it goes in our sport and forcing riders out of the 250 class because they hit a certain age just clips their career short. Adam Cianciarulo is a great example. AC came out firing as a pro and looked like he was going to deliver on the promise of his talent. And then his shoulders came apart like a dried out sand castle and it’s been a long ride on the struggle bus up until this season. To illustrate the point, look at where Cooper Webb is. Adam used to beat him regularly and soundly, but now Coop has a handful of titles and a factory ride in the 450 class. Meanwhile, Adam is poised to make a run at his first title in 2018. Now, if you enforce your rule of kicking out kids who’ve had their chance, AC would be forced to move up and race as a privateer in the 450 class and we lose an incredibly talented kid because his career didn’t move as quickly as you think it should. Yes, riders like Osborne and Davalos have been in the class a long time. Would you rather have them out of the sport completely? There are only so many 450 rides and there is no place for them to go, currently. Their options are 250 class, Arenacross, or Europe. Just sit back and enjoy the racing—does it matter who’s winning as long as the racing is good?

So, obviously, Uncle Sam will get his share of the million dollar prize. But, of the remaining money, how much is Marvin entitled to personally? All of it? Or does the team have claim to some of it?

P.s. I was literally sitting 3 rows up, directly in line with the landing of that triple at bank one ballpark when your bike broke in half. It was awesome. Glad you're OK though.

I’m glad you were entertained because it was not awesome from where I was sitting. That money, minus what our government takes and squanders, is entirely Marvin’s. Race teams don’t get any of the rider’s purse money or bonus money here in the U.S. The GPs are a different story entirely. Now, most riders will break off a chunk of bread for their mechanic to the tune of 10 percent, but that varies from rider to rider. And once you get home and the check actually shows up there’s no accounting for what your wife will go out and buy. If I had a check that fat hit my account I would probably come home to a Maserati in the driveway and a blindingly clear princess cut diamond the size of a cantaloupe on my wife’s finger. I’ll be keeping an eye on Matilde’s hand, but wearing good sunglasses just to be safe.