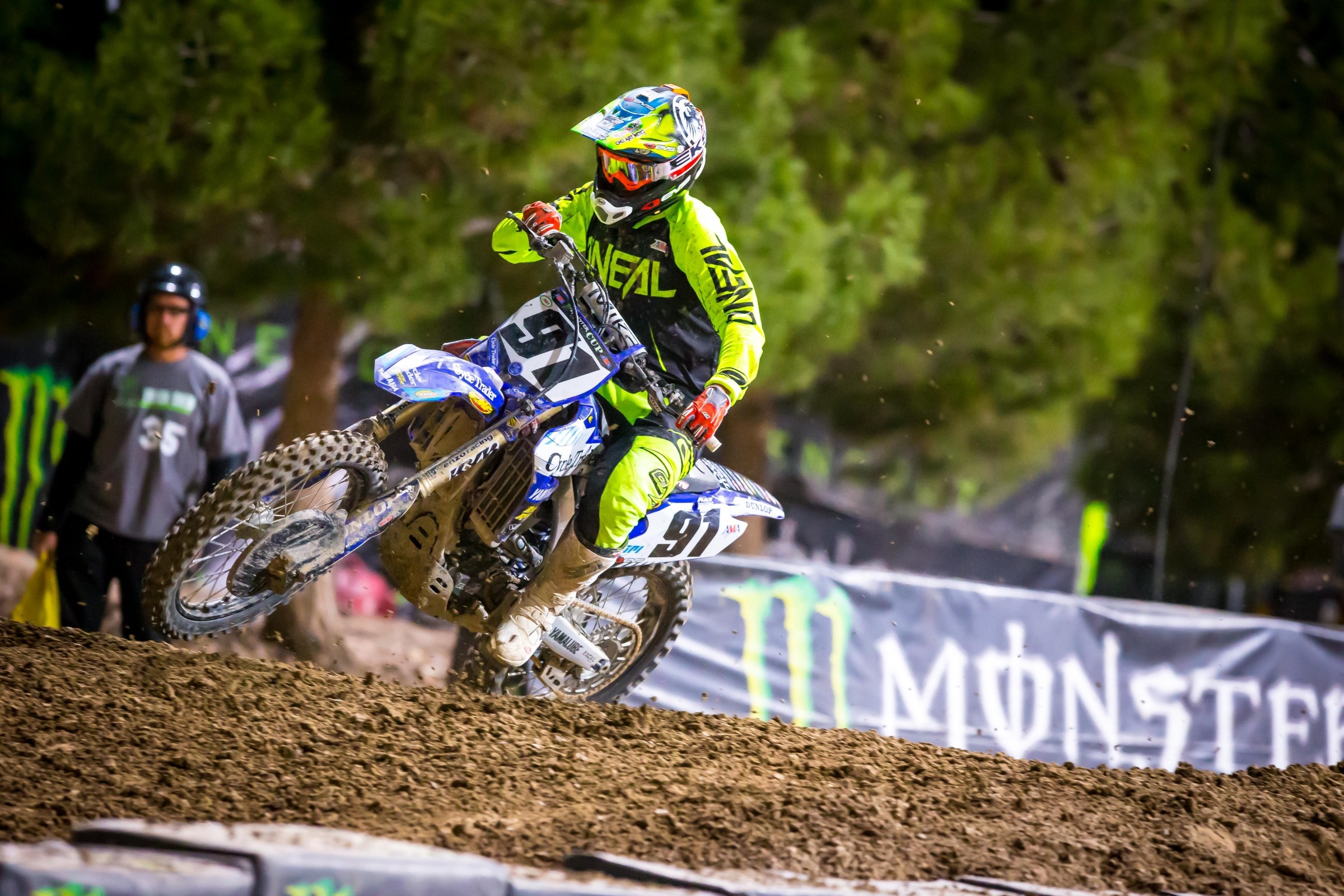 The Monster Energy Cup is a different type of event for privateer riders. They’re not expecting to win the Monster Million, and they’re not testing factory works bikes for 2018. Most of the time, they’re just there to make some money from the event’s big purse and maybe make enough noise to get a ride for next year—but rarely do they have anything locked in this early.

Alex Ray is one of those riders, but he’s hoping to stick with the CycleTrader.com/Rock River Yamaha team that picked him up last year mid-way through supercross. Davi Millsaps took A-Ray under his wing last year and gave him advice on training and more, and Alex showed up looking trim for the Monster Cup. He went 14-14-14 for 12th overall.

Also, last week we checked in with Tyler Bowers, so we’ll run a follow up with him here. Bowers went 12-9-9 for 10th overall.

Racer X: Monster Cup, the new and improved A-Ray. You’re rocking O’Neal, you lost a lot of weight, and you’re on Yamaha, the ’18. It’s been great.
Alex Ray: Yeah, it’s been great. Everyone keeps coming up to me saying “Man you look good! You look like you’re in shape! You look like an athlete now.” So yeah, it’s good, and I actually feel stronger on the bike. I got catywhompus earlier, but my strength is good so I have less catywhompus moments now then I did, because I’m in better shape.

You had to go to the LCQ. What happened in qualifying?
I guess I just ran out of talent in practice!

But you got it done and you got it into the main event. How’d it go?
It was good. I really liked the Joker Lane and I was able to take advantage of it. I was top 10 in the second main event, then a couple of guys got by me, and then I came up on a guy and bumped into his rear wheel and went down. So I finished 14th. Three 14th-place finishes on the night, so that’s 14-14-14.

What about the Joker Lane? You said you liked it. It was faster this year for the first time. Most people took it early, right?
Most guys took it early—actually, I wasn’t paying attention to the other guys, I was riding my own race. I took it first chance I could get. I was just trying to get up in the hunt. I noticed in the second main event when I took it and was running top 10, I started going faster riding with those guys. I started racing with guys I don’t normally race with. I think that was very beneficial for me.

We saw a lot of injuries tonight—Bogle, Gajser. I was getting texts from well-known star riders telling me how dangerous and scary the track was. What did you think? Just that one rhythm when you’re hitting Mach 4?
Yeah, you’re doing a small three over a big five footer, coming off of a straightaway. Yeah, that was very sketchy. The pockets were super, super tight tonight, so it was very easy to get catywhompus. I’ll tell you. It’s unfortunate, I feel for those guys, but hopefully they’re alright.

You’re on the CycleTrader/Rock River Yamaha team today. We hope it’s going to be that way in ‘18?
You should ask her [team manager Christina Denny].

Is he back for ’18?
Christina Denny: We’re working on it. I have to go through all his agents and everything to get to him.

Ah, working through the agents to get to him.
Ray: That’s you Matthes! That’s you. And Davi [Millsaps].

Racer X: Seemed like a solid night for you.
Tyler Bowers: Yeah, it was great. I was trying not to take any crap. I got taken out in the first moto by [Christian] Craig, so I was like “That’s it, I’m not being nice to anyone anymore.” So then [Benny] Bloss comes in and knocks the crap out of me in the back section, and I got all heated and hit him back, next thing I know we were both kind of going at it. But it was good! We didn’t really try to kill each other, it was good racing!

He was worried, but he said you were like “Cool man!”
Yeah, yeah! You can clean me out, and as long as it’s a good move and you’re not trying to kill us, I’m good with it. I’ll give you thumbs up and say I would have done the same thing. You hit me head on I’m not going to be cool with that. Yeah, so really good racing with him. Ended up like seventh or eighth in another one and stayed right with JG [Josh Grant] so I was pretty pumped on that.