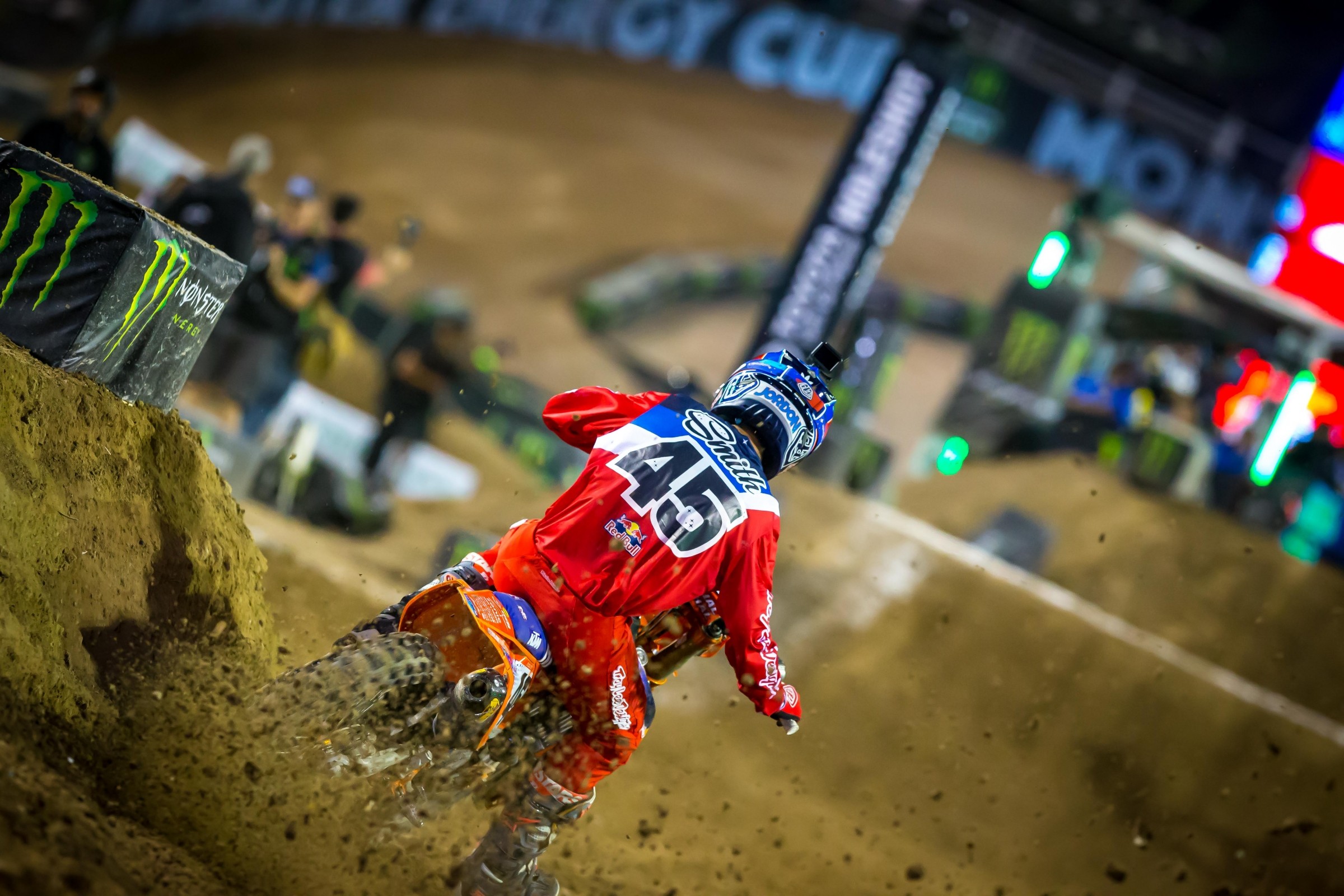 Jordon Smith had that jackpot sitting right in front of him the last time he came to Las Vegas. The 250SX Eastern Regional Championship was on the line, and Zach Osborne and Joey Savatgy were both down early. Smith controlled his own destiny, until he, too, crashed, and the impact was enough to knock him out of the race.

The back injury he incurred kept him out of the early part of Lucas Oil Pro Motocross, then a knee injury spoiled the rest of his summer. But he showed up in Las Vegas on a Troy Lee Designs/Red Bull KTM 450, and made the most of it, with strong 5-4-6 scores and fifth overall. Not bad for a full-time 250 guy, as he edged Justin Barcia and Josh Grant for the night.

Steve Matthes caught up to Jordon in the TLD pits. Turns out he was one of the few riders to actually have a strategy in the Joker Lane!

Racer X: Probably the surprise of the night. On a 450, fifth overall. Some really good main events. What’d you think?
Jordon Smith: Yeah, I’ve been on the 450 for like three weeks and really only been back riding from the summer for like four weeks. Just came to have a little fun. Feeling pretty good lately at the practice tracks and getting better. Working with all the guys from KTM and riding with Broc [Tickle] and Marvin [Musquin] and [Jason] Anderson out at the KTM test track. Just trying to learn from them. Those guys are super fast. I came out here to have a little fun.

Were you like, hey, I think I can get top five or six?
Yeah, I was kind of shooting for top five. I felt if I had a good night with some good starts I could get top five. I actually kind of surprised myself, I would say, because I didn’t get good starts and still ended up top five. The Joker Lane, I felt like I had a pretty good strategy there for the most part. All night it worked out pretty good for me.

What was it?
I just tried to see who was in front of me. If it was guys that I felt like I for sure could pass that didn’t take it, then I would take it to go ahead and get around them and not get held up.

You would wait?
Yeah, and then in the second moto I think the top three guys took it. It was Marvin, Anderson, and Tickle. I felt like I could just latch onto those guys. Then Barcia and [Vince] Friese didn’t take it. So, I took it and kind of latched onto them and we ended up that lap we gained a little bit on Barcia and Friese, and Barcia came out just behind me. So, I think it worked out really good in the second moto for me.

The starts, you had to start on each side, the first two. What’d you do for the third one and which side was better, if there was one?
I don’t think there was too much of one side being better. Actually the rhythm we had to hit backwards was probably a little bit smoother transitions. But the last time I took the left side with Marvin over there I just felt like the left side was a little bit better. They were all left-hand turns so everyone had their foot on the rear brake and not so much carnage, I felt like. I just tried to just get a good start. I was kind of struggling with that start. They had the grate kind of flipped different than we do at our practice track, so I was kind of spinning pretty bad. Just tried to figure that out all night.

You might have made more money tonight than you made in entire purse for your 250 series last year.
Do you know what the purse pays? I don’t even know.

I just saw it this week. You got fifth? I want to say that’s like eight grand or something. It’s pretty good.
Wow, that’s pretty impressive.

Last time you were here we saw what happened [Smith crashed out while in position to win the 250SX East Region Championship]. Last time you were here you were in the front, looking good. The other two guys [Zach Osborne, Joey Savatgy] were back. Anything at all?
It was just a bummer. I felt like I had it. All year I had went the entire season and I had crashed twice in main events and it was from getting together with riders. I hadn’t crashed on my own all year, and before, earlier than this year, it wasn’t like me to be like that. I had had such a good year and then just that one little slip up.

As far as coming back here, do you think about it?
No, I didn’t really think about it much, except they have a single in the exact same place. I think it was the first moto, I kind of got kicked a little bit. We watched on the video. We were like, we’ve got to figure out why that happens, because it can’t happen again.

Coming out of the sand guys were using a little braking bump or something that was there to go over. Were you doing that? It didn’t look any faster, but it was pretty cool.
Yeah, I think in practice I did it behind Tickle and I actually caught him a little bit, maybe a tenth or two. But for me, it was just a lot smoother.

You were one of the first guys I saw do it.
I heard that I was the first one to do it in the practice this morning. I think maybe [Justin] Bogle did it in press day though the other day. A little bit different today. But I just felt like it was smoother. For 10 laps, that track was all about just being able to hit your marks and stay right there.