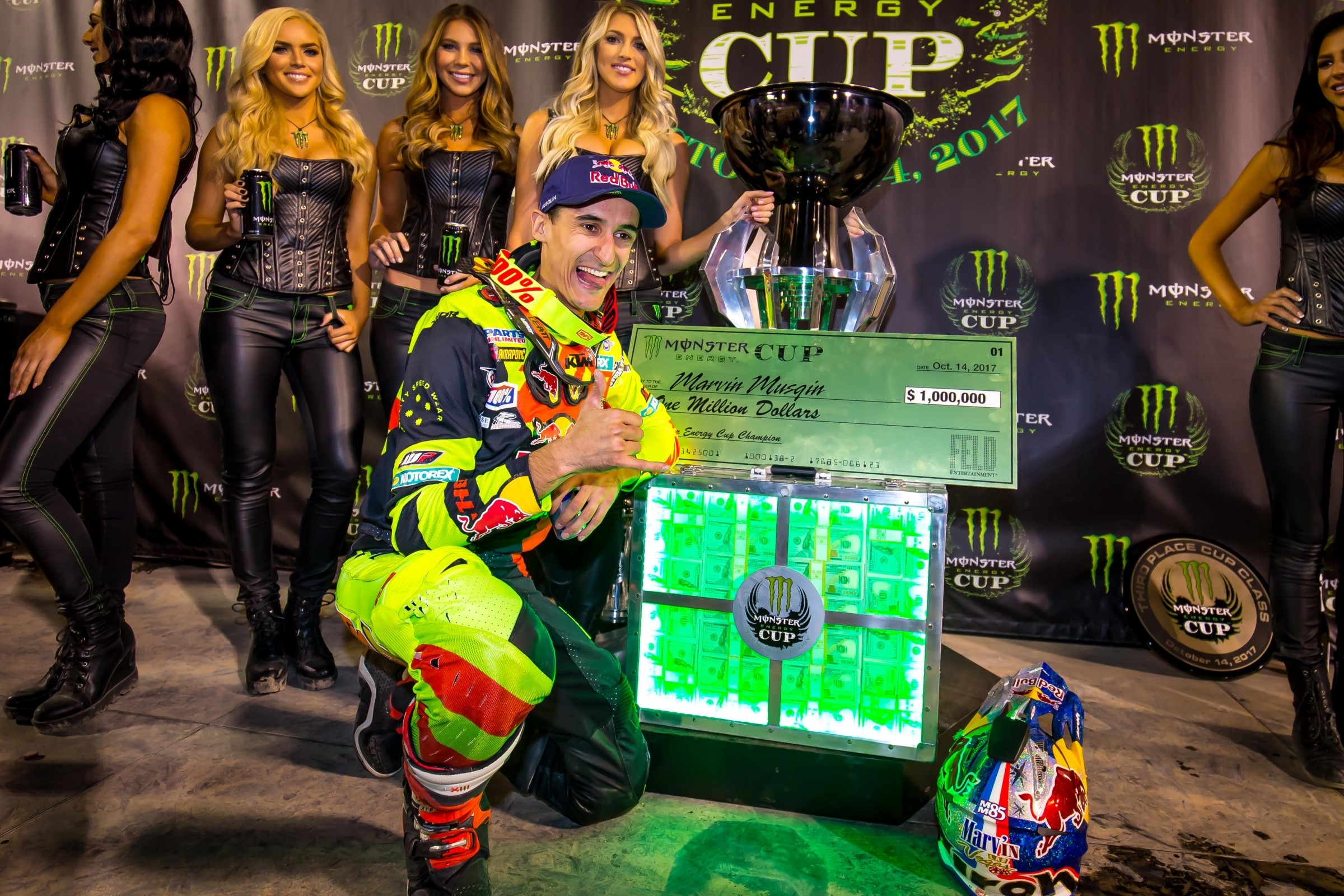 There was a bit of a heavy feeling in the Sam Boyd Stadium at this years Monster Energy Cup (MEC) with the tragic Las Vegas shooting happening only two weeks ago down the road. The factory Kawasaki bikes were blacked out and there were #VegasStrong support throughout the pits. The opening ceremonies honored the victims with a special ceremony having everyone in attendance shine their phone light into the air to honor one of the brightest cities in the world. This brightness of the city, on this night, would matched by the brightness of the talent of the up and coming talent of the super-mini and amateur all-stars as well as the premiere class riders.

This race is always exciting and unique and so was the split, elevated start tonight. Monster Cup also includes a metal grate before and after the gate, no whoops, and the famous Joker Lane (expect to see more on that next year.) This year was the first year the Joker Lane was faster which didn’t seem to play into the outcome of the race as nearly everyone took it on the second or third lap (you can’t take it on the first). What else is cool about this race is that the premiere riders go first. There’s no heat races or LCQs, it’s straight to the action.

The excitement of this MEC was quickly lost after Justin Bogle went down hard in a high speed rhythm section on the third lap in the first race of the night. He was knocked out and laid there motionless for 20-30 seconds. With his condition and position on the track in the middle of the lane, the red flags came out for a full restart.

When the Cup Class got going again for its first race, Eli Tomac and Marvin Musquin were battling. Tomac got the early lead and Musquin was right behind and we got a battle many were looking to see, only it was short lived. They exchanged positions in the early part of the race before Tomac threw it away coming back into the stadium. He got sideways off a roller, high-sided and hit the deck hard. He jumped up and off the track, but he was done for the night.

After  Jason Anderson darted out of Tomac's way coming down the straight, he set his sights on Musquin, which would be the theme for the rest of the night. Tim Gajser also had a scary crash similar to Bogle’s and in a similar spot of the track. Gajser wasn’t knocked out, but he remained down for about two laps before the Alpinestars Mobile Medical Unit assisted him off the track. That rhythm section gave riders trouble all night and when asked about it in the the post-race press conference, Anderson said, “I think the rhythm lane was pretty sketchy. That might be one of the gnarliest gaps we did all year. We did press yesterday and I was hoping they’d mellow it out a bit, but they did not mellow it out. That was something you had to really think about every lap.” With Tomac, Bogle, and Gajser out, Musquin held on to take his first MEC race win.

Everyone wondered if Tomac would come back out for the remaining races and upset Musquin’s chances of the million dollars, but last year's event winner called it a night and did not return to the track. The second race looked much like the first with Musquin out front and Anderson in a close second.

“The Joker Lane really threw me off in the first moto, but it ended up working out,” Anderson said in the post-race press conference. “It was weird because I feel like everyone takes it the first or second lap. I almost like the other way better because I feel like you really did have to be more strategic about it.”

With the Joker Lane not being much of a factor in the racing tonight, after the opening laps were completed in the second Cup Class race, there wasn’t much excitement. Anderson trailed behind Musquin again in second without much give. Broc Tickle who made his debut ride with Red Bull KTM this weekend and also got his first podium for them in that second race.

The third race was a bit nerving--with two of the three needed wins already, Musquin had a shot at the Monster Million dollar payday. He lined up on the left gate. This was a bold move because nearly every holeshot from the night came from the gate on the right—the riders were able to choose their gate side in the third race. But Musquin pulled a massive holeshot in the third race and continued on as he did in the two previous races with Anderson trailing. He stretched out a lead and took the win. One can only imagine the pressure associated with that! The Frenchman held steady and claimed the money, only the second rider in the history of the event to do so.

“I wasn’t even thinking about winning all three motos," said Musquin. "It’s unreal to go out and win all three. We had such a long break between the second and third moto – which made it more stressful. The key was to get a good holeshot and try to go fast. To be honest, in my head I was thinking I would get a start around the top-three and then wasn’t sure what I would do. I knew it was going to be so hard to pass, so getting the holeshot was the best way to go out for the third moto."

Beyond helping his own bank account, Musquin was asked if the big prize could help boost the sport. Musquin said, “I think so. A lot people were watching it on TV and the stadium was full. For someone to win one million in one night at a motocross race, it’s so unique. We got a lot of views and people will be talking about it. It’s good for the sport. When I met with all my people and my team we were laughing like crazy. It was like being in the casino and winning the jackpot because it doesn’t happen very often. We enjoyed it.”