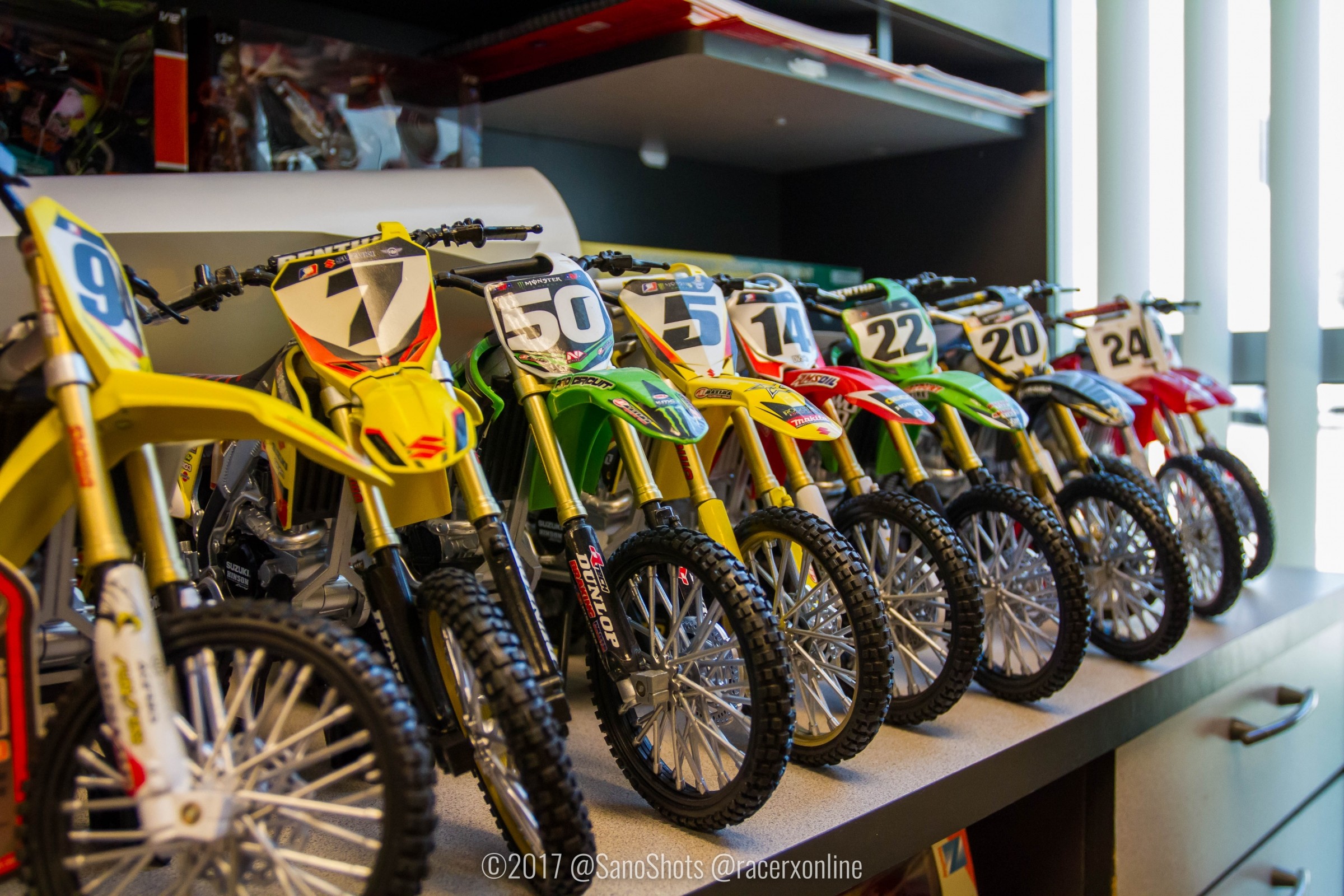 New-Ray Toys is a Hong Kong-based company that has carved its niche in making replica motocross toys from OEM bikes to full on bike replicas of your favorite top motocross and supercross athletes. They specialize in long hauler toys, but their selection ranges from motocross, to military, to truck haulers, to farm sets, to model cars, to UTVs—just about any vehicle out there.

The company has been around for more than 25 years, but jumped into making motocross replica bikes in 2004 with the Woody Woodpecker Honda kit featuring Ernesto Fonseca and Nathan Ramsey’s bikes. There palate has expanded since then and they make toys for many different teams now. Since they started making team replica bikes they’ve made models for riders such as Ricky Carmichael, Kevin Windham, Andrew Short, Davi Millsaps, Ryan Villopoto, and more.

I met with with Kenny Baba, who works in their Chino Hills office in California and has been with the company for 13 years. During that time Kenny has acquired quite the collection of their products throughout the years and has tons of jerseys and other motocross memorabilia—many of which are signed by the athletes themselves. He gave us a tour of his famous office and showcased many of their other products. You can check out the tour below.

One difficulty New-Ray Toys faces is the involvement with energy drink companies. We all know that companies like Red Bull, Monster Energy, and Rockstar Energy fuel the motocross industry with the high dollar sponsorships they provide, but it gets tricky when it comes to toys. There are regulations in place that don’t allow energy drink companies to advertise directly to kids so this is a bit of a grey area when making a team bike whose title sponsor is an energy drink company.

Another difficulty New-Ray Toys faces is staying in sync with the athlete’s sponsors and manufacturer. A rider could be on one team one year and different one the next. There is about a six month turn around on the bikes after the designs have been approved, which can be a whole process within itself, so realistically it takes about nine to 12 months to complete a toy. Most graphic kits for the teams aren’t complete until December for the following year and of course the teams want the bikes to be ready to sell in January at supercross, but there are many steps in the process of getting the toys into kid’s hands. There are about 20 different pieces that go into these die cast motocross toys and since they manufacture each itemized part individually and then assemble them once all the parts are complete, it takes some time to go from A to Z. And with the motocross toys making up about a tenth of New-Ray Toy’s business, sometimes things can be delayed further as production schedules get re-arranged to meet demand. With their Hong Kong manufacturing facility employing roughly 4,000 employees, it speaks to the volume of other products they produce.

It was great getting an inside look at what goes into making these cool toys. You can expect to see Honda HRC bikes with Ken Roczen and Cole Seely, Eli Tomac’s Monster Energy Kawasaki, as well as a championship edition Red Bull KTM Ryan Dungey bike near the end of this year. They sell the latest toys at both motocross and supercross races as well as online, so be sure to check their line here.