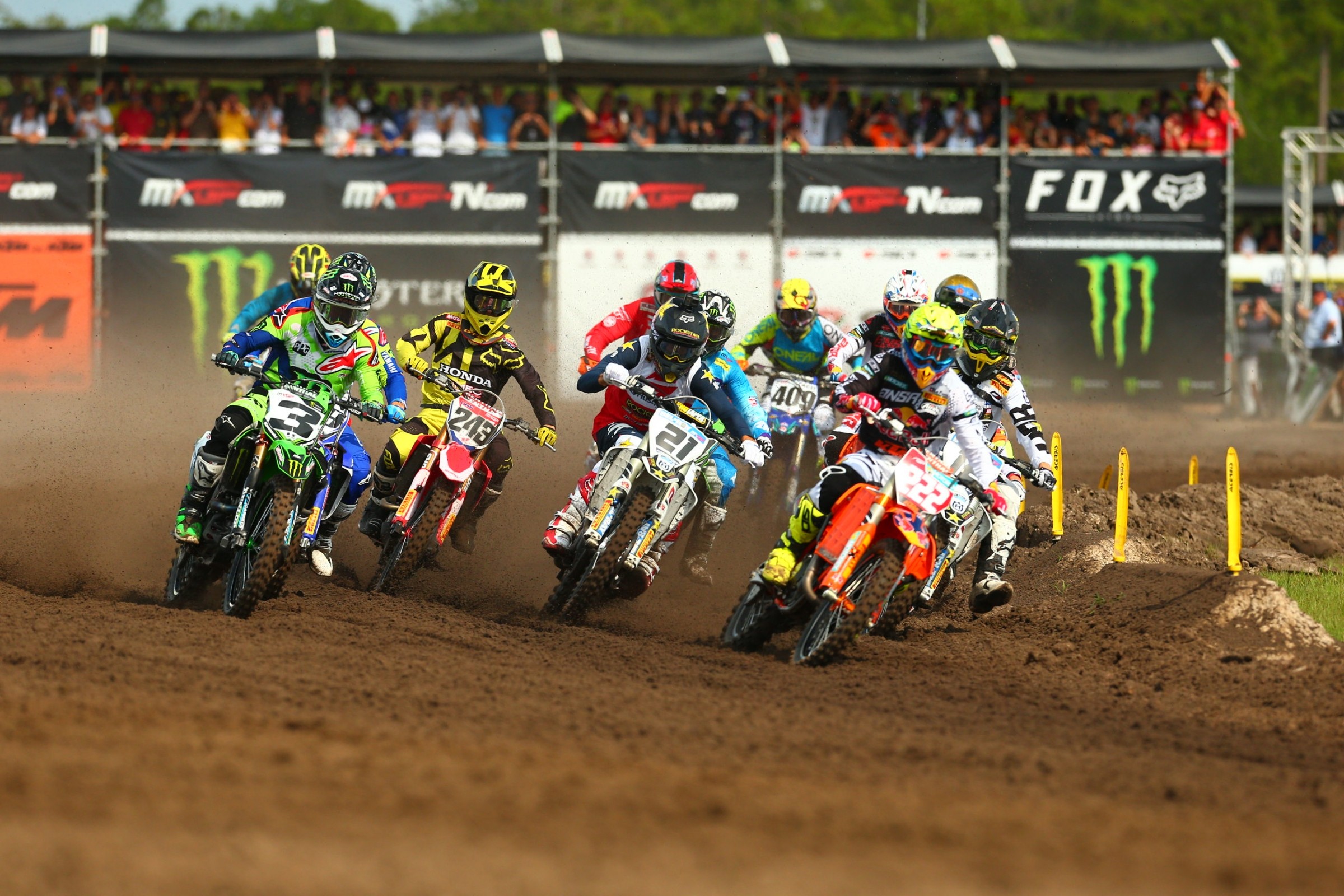 Well, it’s all over but the red, white, and blue crying as Red Bull KTM’s Jeffrey Herlings took the MXGP class overall win at the MXGP of USA held at WW Motocross Park just outside of Jacksonville, Florida. It wasn’t nearly as dominant as his win last week in Indiana, but nevertheless, the Dutchman looked great all weekend long. In the MX2 class it was GEICO Honda’s RJ Hampshire taking his first professional win with very good 1-1 motos, which even included a fall in moto one!

Let’s get to the nitty-gritty of the day that was.

What looked to be a good sized crowd saw Monster Energy Kawasaki’s Eli Tomac grab the lead early in moto one and take off with a dominating win. It was quite a change from the day before in qualifying when Tomac couldn’t log a quick practice time and finished 12th in the qualifying race for gate pick. That was all forgotten when the #3 checked out in moto one and put on a clinic. It stretched his GP winning streak to five motos in the row going back to last year. What was the difference? Well, Tomac credited some radical bike changes from the day before where the team went with the Southwick set-up due to how sandy the track turned out to be.

The second moto Tomac gated about seventh with Herlings and his teammate Antonio Cairoli out front quickly. The Kawasaki rider took too long to get by Gautier Paulin for third and by the time he did, he fell out of the Jetstream of the two KTM riders. No excuses from Tomac afterward, as he mentioned that he didn’t have as much in the tank after the moto one win as he needed. Tomac’s 1-3 was good enough for second overall. After watching him on Saturday, this result was great.

Herlings finished a distant second in moto one and then lurked behind leader Cairoli in moto two for a good 20 minutes until the current MXGP points leader tipped over. That was all Herlings needed to cruise to the overall win. Herlings mentioned in the press conference that he was sizing up Cairoli for the pass before he fell.

What Herlings did do by beating the #222 was hold off Cairoli clinching his ninth world title. That will have to wait until next weekend in Holland. Cairoli ended up 3-2 for third overall on the day.

In MX2, RJ Hampshire blitzed through the pack in moto one early and he did a good job to be up there in the first place as due to another mechanical in the qualifying race, he had 28th gate pick in both motos. The Honda rider worked up to fellow American Thomas Covington and slowly gained ground on him trying everything to get by until he made a sweet pass on the outside of a straight. From there he slowly pulled away until a late race fall made him sweat as he picked up the bike right before Covington could pass him.

In the second moto Hampshire saw what Rocky Mountain ATV/MC-WPS-KTM’s Dakota Alix did with the last gate pick in the first moto and went to the far right hand side of the gate. Once it fell Hampshire moved right onto some grass and proceeded to click through the gears to pull a great start. From there he was never really challenged until late in the race when Suzuki’s Hunter Lawrence (Australia) pressured him at the end. Lawrence was flying and ended up tying a career-best overall MX2 finish with second overall via 3-2 scores.

GEICO Honda team manager Dan Betley was in his first race in the role after coming over from the Factory Honda gig he’s had for years. So Dan’s 1-0 as a team manager now!

Covington had a good day with that second in moto one and although he dropped back from second to fourth in moto two he was very fast all weekend long and was third overall.

In the MX2 points chase, Suzuki’s Jeremy Seewer put five points on KTM’s Pauls Jonass, but Jonass still has a comfortable lead in the points with two races left. The first moto saw Jonass fall right off the start but he charged back to 10th.

Yamalube/Star Racing Yamaha’s Justin Cooper was a strong eighth in moto one and then his Yamaha decide it was done in moto two while just outside the top five. His teammate Mitchell Harrison would’ve been fourth overall but with two turns to go in the second moto he was put down by Jonass. The three or four spots he lost cost him fourth overall and he brought it in for 4-9 scores.

The young Spaniard Jorge Prado pulled out of moto one with heat issues and then didn’t start moto two. Tough day for the kid.

In MXGP, Paulin had a tough day with two huge crashes in the first moto and limped in for a 20th. He was jumping a big quad that not many riders were doing (Herlings was the first one to do it) and crashed hard when he landed in some soft stuff. Then he flew off his bike when his leg got caught up in a rut later on. This comes after Justin Barcia landed on his bike when a yellow flag was flying the day before. Paulin brought it in safe and sound for a fourth in moto two in MXGP.

Rocky Mountain ATV/MC-WPS-KTM’s Benny Bloss had an issue in moto one and was forced to pull out. Moto two he rode steady to a 13th place and remarked afterward that he thought the track was insane rough.

Fredrik Noren rode great in moto one to come from outside the top 20 to 11th. Noren was the first rider not on factory equipment in the first MXGP moto and it was a gritty ride. Second moto he was involved in a first turn crash and was forced to pull out.

Kyle Chisholm had his typical day. On his practice bike, the #11 started out back both motos and then had to slowly work his way up into points paying positions both motos.

AutoTrader.com/JGR Suzuki’s Justin Barcia had a day he’d rather forget with 13-15 finishes. The first moto he got a good start but dropped back quickly. Second moto was another rough one for the #51.

Monster Energy/Pro Circuit Kawasaki’s Justin Hill missed the warm-up with bike issues and then struggled in the motos—although he came up from a long way back in moto one. In moto two he pulled into the mechanic’s area at one point, but did rejoin the race. After the race it was announced he was DQ’d for cutting the track somewhere.

Alix is battling a groin issue and his great start from going on the grass (that Hampshire saw on video and went there for the second moto) was about the highlight of his day as he sat out moto two.