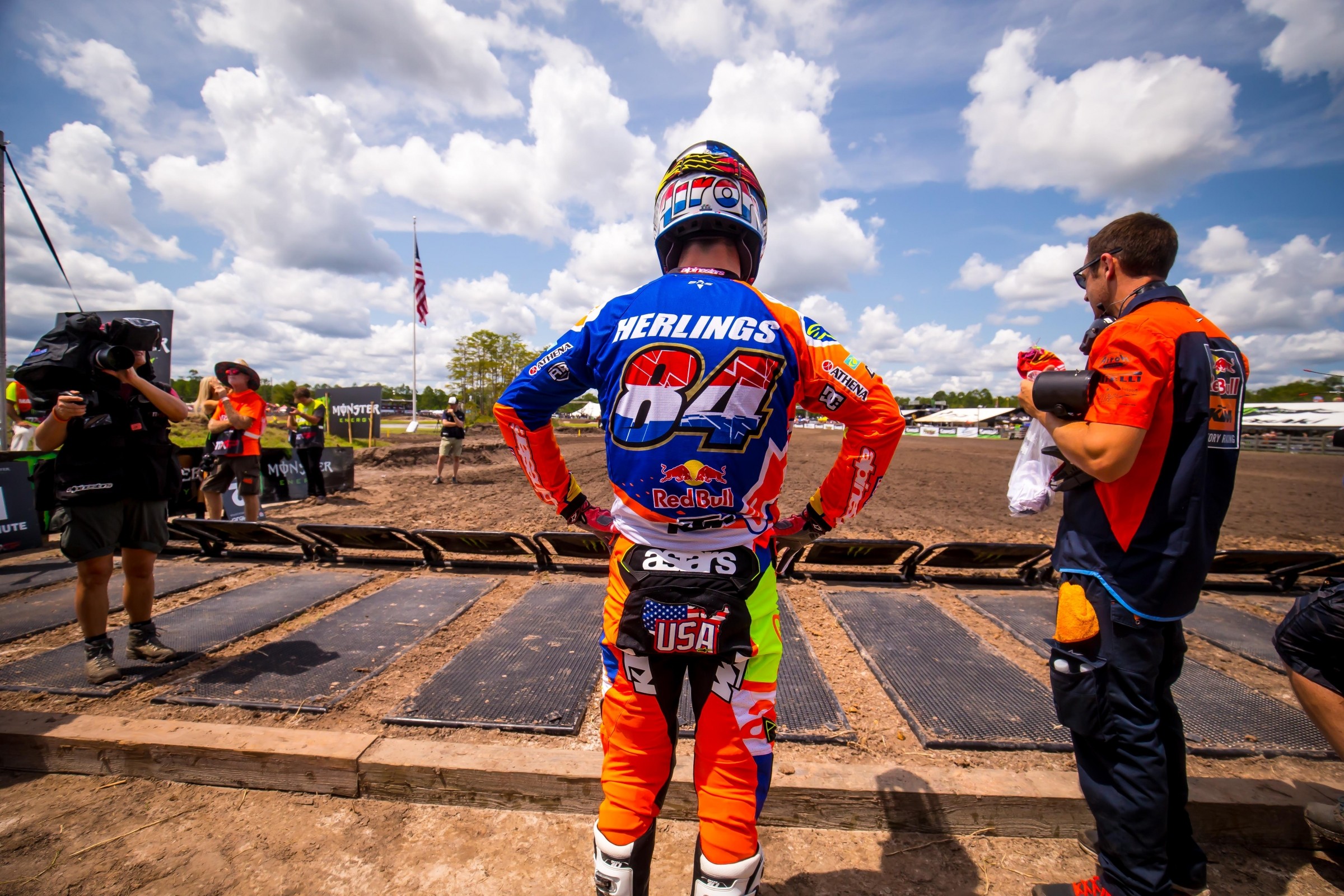 Welcome to the Racer X Race Day Feed, your one-stop shop for round 17 of the FIM Motocross World Championship from Jacksonville, Florida, at WW Motocross Park. We’ll be updating this post throughout the day with news, notes, and results from today's races, so be sure to check back throughout the day. You can also follow Racer X on Twitter, Instagram, and Facebook to stay up on all the action.

Welcome to the second day of action from WW Motocross Park in Jacksonville, Florida, site of the MXGP of USA. Qualifying races took place yesterday to determine today’s gate picks and it was a rough day for many of the U.S.-based riders. Factory Yamaha’s Cooper Webb crashed toward the end of the practice session and sustained a broken thumb, according to On Track Off Road editor Adam Wheeler. He is out for today.

Monster Energy/Pro Circuit Kawasaki’s Adam Cianciarulo is also out for today after tweaking his knee in practice yesterday. Initial reports indicate that the injury isn’t serious. Joey Savatgy did not race yesterday due to foot/ankle injury that kept him out of the last two rounds of Lucas Oil Pro Motocross. He is also sidelined for today.

Live coverage can be seen on MXGP-TV.com beginning with MX2 race 1 at noon ET. CBS Sports Network will air live coverage of the second motos starting at 3:00 p.m. ET.

Justin Hill did not participate in the warm-up. We will update once we know more.

Hollywood would have a hard time writing a better script than what we just witnessed in the first MX2 moto at the MXGP of USA.

Thomas Covington looked great in qualifying yesterday and grabbed the early lead in the first moto. He was followed by fellow Americans Mitchell Harrison and RJ Hampshire, who had 28th gate pick after a crash and mechanical in yesterday’s qualifying race.

Hampshire was the rider on the move early, getting past Harrison and applying heavy pressure to Covington. Covington showed poise early, withstanding everything Hampshire was throwing at him. At the 18 minute mark Hampshire kept it pinned around the outside to move into the lead. By lap 8, Hampshire open a three second gap on Covington.

Hampshire’s lead ballooned to 11 seconds on the following lap after Covington lost the front-end in a corner. Covington was able to remount and hold onto second, but he had Hunter Lawrence, who had moved into third, and Harrison right on his rear fender.

Covington was able to regroup and he and Lawrence put distance between Harrison. Out front, Hampshire still held a 7.6 second lead on lap 12, but like Covington he lost the front-end late in the race. His lead over Covington dropped to less than a second and less than two seconds over Lawrence.

Hampshire regrouped quickly and held on to take the moto win by 3.6 seconds. Covington took second ahead of Lawrence, Harrison, and Thomas Kjer Olsen. Chase Sexton finished sixth ahead of Brian Bogers and Justin Cooper. Jeremy Seewer overcame two crashes to take ninth ahead of points leader Pauls Jonass, who crashed on the start.

If you had any concerns regarding Eli Tomac’s level of interest in racing this weekend after he struggled in qualifying yesterday, those can now to be put to rest. Tomac led start to finish in the first MXGP moto at WW Motocross Park and cruised to a dominating moto win.

Tomac didn’t have a great gate pick due to his struggles in the qualifying race yesterday, but it didn’t seem to matter as he grabbed the early holeshot over Max Nagl, Tim Gajser, and Justin Barcia. Points leader Antonio Cairoli and Jeffrey Herlings were both buried at the tail end of the top 10 off the start.

With a clear track, Tomac set a blistering pace early and built a 8.4 second lead on Gajser by the third lap. After a solid start to the moto, Barcia was pushed outside the top 10 early and eventually finished 13th. With Tomac out front, Herlings and Cairoli were making their way through the field rather quickly.

By the fifth lap Herlings had already moved into second, but he didn’t have a chance of catching Tomac as he was facing a 14.4 second deficit. Cairoli, meanwhile, had trouble getting around Nagl and by the time he moved into third on the seventh lap, Herlings had a good gap in second.

The majority of the second MX2 moto at the MXGP of USA failed to deliver the same intensity we saw in the first moto, but it certainly delivered plenty of action at the end.

Thomas Covington grabbed the holeshot for the second straight moto, but he had first moto winner RJ Hampshire all over. Similar to his pass for the lead in the first moto, Hampshire held it wide open around the outside to take the early lead. Hampshire sprinted early to open a five second gap over Covington and MX2 points leader Pauls Jonaas.

The real charge in the moto came from Switzerland’s Jeremy Seewer. After sitting around eighth early in the moto, Seewer caught fire and caught up to teammate Hunter Lawrence, who finished third in the first moto.

The Suzuki teammates put in an incredible charge late in the moto. With just under six minutes and two laps remaining, Lawrence moved around Covington to take over second. Shortly after, Seewer also got Covington. They quickly gapped the American and went after the leader Hampshire, who saw a four second lead disappear.

With a lap remaining, Lawrence dug deep and was applying intense pressure to Hampshire and nearly made a pass for the lead with just a few corners remaining. Hampshire was poised under the late pressure and held on for a 1.1 second win. Seewer finished third ahead of Covington and Jonass.

Hampshire went 1-1 to capture the overall, his first victory in the professional ranks. Covington finished third overall with Lawrence in second.

Update: Hill was apparently disqualified from the moto for cutting the track. Updated results are below.

Antonio Cairoli will have to wait another week for the opportunity to clinch a ninth world championship as Jeffrey Herlings rode a spectacular race in the second MXGP moto at WW Motocross Park to push the championship to Assen.

Cairoli sprinted out to the early lead over Gautier Paulin and Herlings. First moto winner Eli Tomac was around sixth off the start. Herlings was first to strike moving into second early in the race. Tomac struggled to get around Paulin early and wasn’t able to move into second until the 23 minute mark.

This set up the showdown we all wanted: Cairoli vs. Herlings vs. Tomac. But Tomac was never able to make a charge at the top two, as Cairoli and Herlings were running 2:03s to Tomac’s 2:05s.

If Cairoli finished ahead of Herlings in the moto, he would clinch a ninth world championship. Every time Cairoli started to stretch out his lead, Herlings would close right back up. With nine minutes and two laps remaining, Herlings was back to within two seconds of Cairoli and the battle for moto win was taking form. But a few moments later, Cairoli tipped over in a corner and Herlings was into the lead for the first time in the moto. Cairoli would remount in second, but was more than seven seconds back of Herlings and was never able to mount a charge.

Herlings would cruise to the moto win by 15.9 seconds. Cairoli took second ahead of Tomac, Paulin, and Kevin Strijbos. Benny Bloss finished 13th in the moto while Justin Barcia took home 15th, one spot ahead of Kyle Chisholm. Fredrik Noren did not finish the moto.