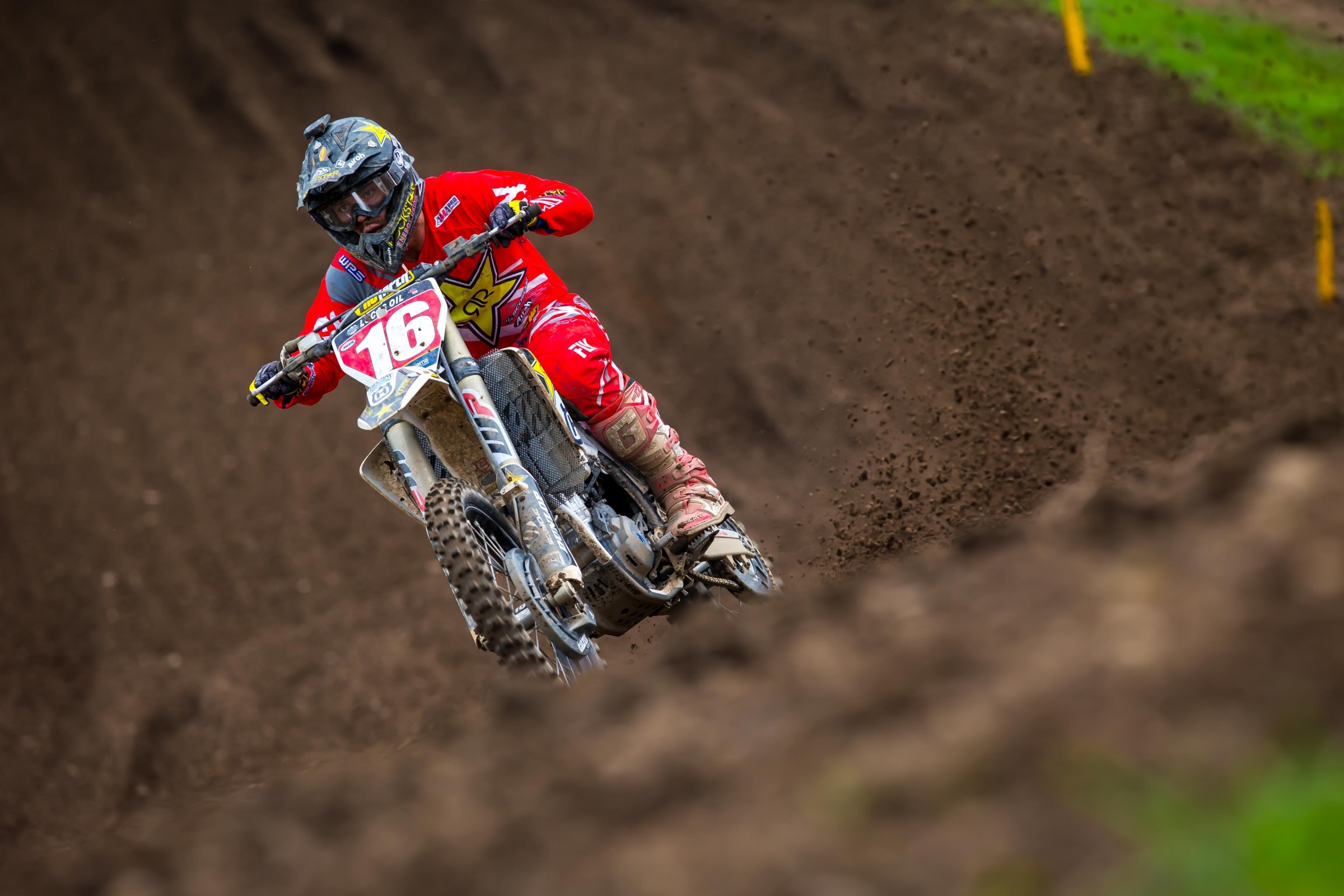 Zach Osborne had a mathematical shot at wrapping up the Lucas Oil Pro Motocross 250 National Championship last weekend at Unadilla, but Jeremy Martin made sure it didn’t happen by going 2-1 for the overall. This week Osborne’s chances are much, much better. He doesn’t even have to gain any points on anyone! All he has to do is make sure he doesn’t give up more than 13 points to Martin, and 39 points to Joey Savatgy. Given the kind of season Osborne’s had, that shouldn’t be too difficult. Expect the Rockstar Energy Husqvarna Factory Racing rider to take home the title this Saturday at Budds Creek, the same track that hosted his first career overall win in 2016. –Aaron Hansel

Martin Davalos started coming on especially strong right around Southwick, prompting many to speculate whether or not he could get on the podium. Well, he did indeed get an overall podium, a third, at Washougal, and followed it up with a second overall at Unadilla. In the second moto at Unadilla he even went after Marvin Musquin and put some pressure on him for the lead! With his recent performances, Davalos has somehow made a podium finish seem almost like a foregone conclusion. It’s been a great storyline to watch—we’ll see if he can keep it up at Budds Creek. –Hansel

With a 27-point lead on Blake Baggett and 31-point lead on Musquin, Eli Tomac is still in a pretty good place, championship wise, with just four motos remaining. That said, there’s no way he’s happy about Musquin winning the last six motos in a row, and he absolutely cannot be pleased about coughing up 23 points to Musquin at Unadilla. Tomac’s grip on the championship is still strong, but if he wants to keep it that way he simply cannot give up another big chunk of points to Musquin or Baggett at Budds Creek. –Hansel

Cole Seely has made no attempt to conceal his intention to improve his results at the Nationals. He’s voiced displeasure with a run of fifth and sixth-place finishes, and even moved to Florida earlier this summer to see if a change in scenery could strengthen his results. Judging by his recent performances, the hard work and changes seem to be paying off. He took third in a moto at Washougal (3-5) and after getting named to Team USA for the 2017 MXoN, landed on the overall podium for the first time in his 450 career last week at Unadilla (3-6). Let’s see if he backs it up on a dry (hopefully) Budds Creek. –Hansel

Want to know Jeremy Martin’s average moto finish in the last six motos before Unadilla? 5.667. Plenty of riders would be thrilled with this, but Martin is a two-time National Champion who is capable of, and should be, battling for wins on any given weekend. Of course, this is not lost on Martin, who said he spent a couple days before Unadilla testing and working on suspension improvements. He also said he did a few things differently off the bike without elaborating much. Well, the changes must have worked because Martin turned some good starts into an overall victory at Unadilla. Does this mean he’s back in the groove? We’ll find out at Budds Creek. –Hansel

There’s no denying the testing Monster Energy/Pro Circuit Kawasaki and Joey Savatgy conducted recently have drastically turned around what was otherwise a disappointing Lucas Oil Pro Motocross Championship. In the last three rounds, Savatgy has two overall wins and three moto wins. In the first seven rounds, he won just one moto. Steve Matthes reported that they did “some things to help the turning.” Whatever they’ve done, it’s worked. While his run at a title is likely over, this momentum will help Savatgy heading into 2018, especially after a heartbreaking finish to Monster Energy Supercross. –Chase Stallo

Justin Cooper stole the show at Unadilla, as the New York native charged through the slop to capture a moto podium in his first ever Lucas Oil Pro Motocross race. While the Nicky Hayden AMA Horizon Award winner was the focus, two other rookies—Joey Crown and Jayce Pennington—had good days as well, scoring nine and four points, respectively. With first-race jitters out of the way, we’ll see how the rookies perform in their second race. -Stallo

Cooper Webb’s meniscus injury didn’t seem to affect him much in the second moto at Unadilla, as he pushed through the mud to score his second moto podium on the year. He missed the overall podium by just one point to Cole Seely. Webb also had a shot at an overall podium at Southwick, but stalled late in the second moto while fighting through some lapped riders. He’s been close, but just hasn’t been able to nail it down. Will that change this weekend? -Stallo

Rocky Mountain ATV/MC-WPS-KTM’s Dakota Alix has had a sneaky good 450MX rookie campaign. While he won’t get the accolades like fellow rookie Cooper Webb, the Vermont native has had a solid season. Through 20 motos, he’s only finished outside the top 15 in six motos. While he’s been consistent, he’s yet to crack the top 10, finishing 11th or 12th five times in the last seven motos. Can he find the top 10 in the last four motos? –Stallo

Coming off a heartbreaking loss at Washougal, his first career overall win vanishing on the final lap, Adam Cianciarulo led the first moto at Unadilla, but tipped it over and finished fifth. In a pre-race press release, AC said he has to find a way to limit mistakes. “It’s time to put it all together. I have to concentrate on minimizing mistakes because I know the speed is there. I’ve just had my issues here and there that have cost me. I’m ready to step up.” Can he pick up his first career overall win this weekend? -Stallo