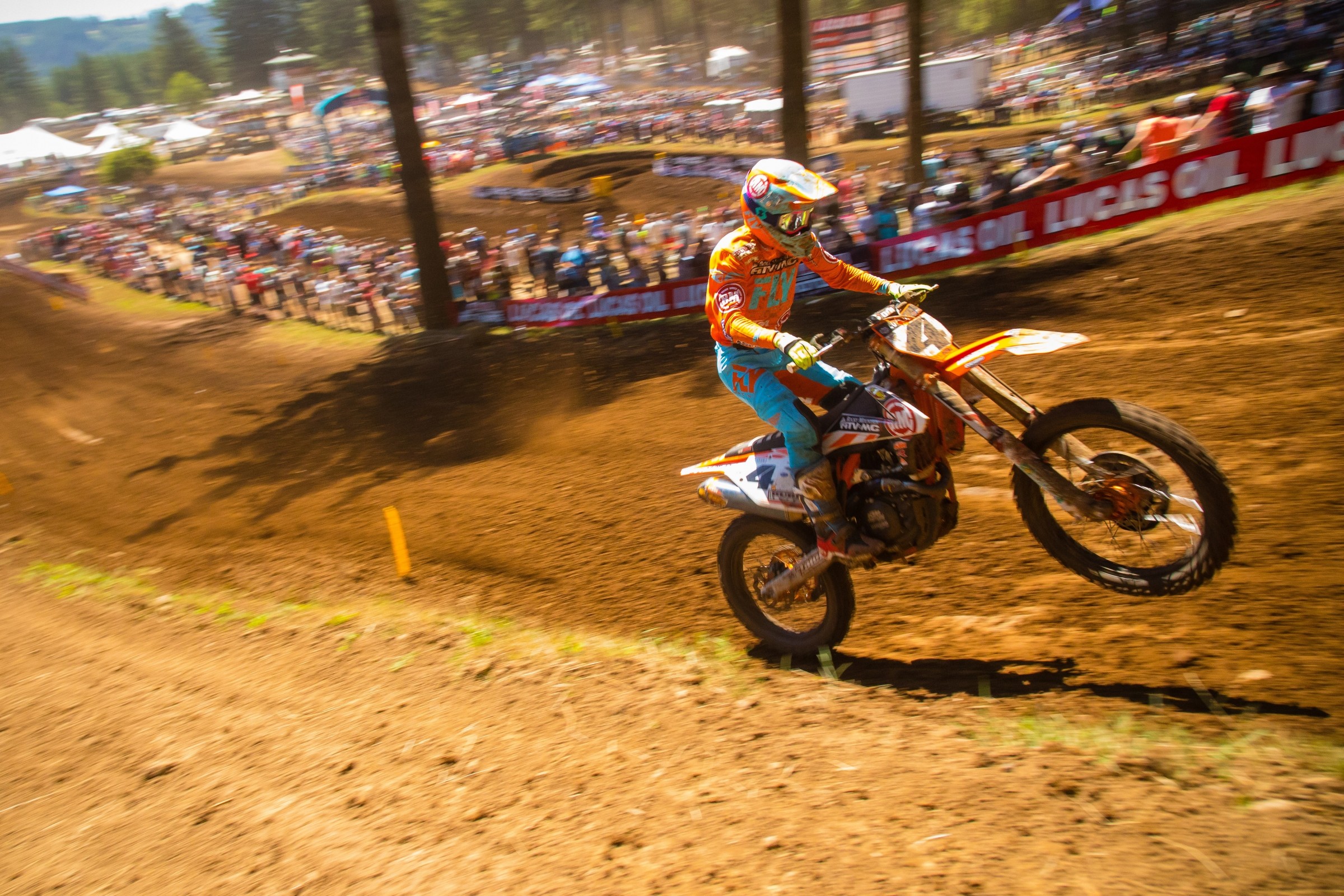 The 450 Class was missing a lot of key names at round nine of the championship at Washougal. Rockstar Energy Husqvarna’s Jason Anderson was sidelined for a third straight race (he started the first moto at Millville, but pulled off after a couple laps); Factory Yamaha’s Cooper Webb was also out due to an injured meniscus. Webb said he expects to return at Unadilla.

AutoTrader.com/JGR Suzuki’s Justin Barcia was also sidelined after a scary crash in practice. He was taken to the hospital as a precautionary measure, but was released later that day and returned to the track to watch the motos.

Despite finishing second overall via 2-2 scores, Monster Energy Kawasaki’s Eli Tomac stretched out his points lead over Blake Baggett to 32 points with just three rounds to go. Baggett had his worst pair of moto finishes since Hangtown where he went 6-8. He finished fifth overall via 7-4 moto scores and lost 12 points to Tomac on the day.

“Today was a tough one,” said Baggett in a team statement. “The Washougal hard pack and shadows are unforgiving and was difficult to push with my thumb. I’m looking forward to the week break and I’m excited for what’s coming up. We are still in this championship fight, and these last three tracks of the season are my favorites.”

Honda HRC’s Cole Seely had his best moto finish of the season, scoring his first moto podium of the year with a third. A fifth in the second moto put Seely fourth overall, just two points shy of the overall podium.

“Today was great. I feel like I’ve finally been seeing a lot more forward progress since starting my new training program, especially in the past two weeks,” he said in a statement. “Things are starting to click. I didn’t feel great in practice and was just trying to hammer out laps to get a good time, which didn’t work too great. When the moto came around, I felt way better. I was flowing really well and finding good lines on the track, as well as mixing up my lines each lap if I knew something had changed or gotten blown out. I’ve always struggled with that and normally take the same lines, so I felt good. Third in the first moto ties my best result, so that was great. I was really trying to go after an overall podium in the second moto, but it was just out of reach. I didn’t want to push it too much and go down because the track was gnarly, but I still felt strong and am happy with fourth overall.”

RCH/Yoshimura Suzuki’s Justin Bogle suffered an allergic reaction in the second moto at Washougal. Bogle, who is asthmatic, said he isn’t sure what caused the reaction. He finished the moto in 10th which was good enough for ninth overall on the day.

“Second moto, I had another good start but I had a pretty scary issue. I had some kind of allergic reaction or something,” he said in a team statement. “I had asthma my whole life and sometimes certain things set it off worse than others. I had to basically just survive that moto. It was miserable. I wanted to pull off, but I did that the week before. It’s been a rough couple of weeks. Luckily, we have a weekend off so there’s some time to regroup. Somehow, I ended up with two top 10s and 9th overall. I’m not proud of it, but we’ll keep it moving. Back to work. We’ll make the most out of these last few.”

"I'm stoked with how this whole weekend went," said Justin Hoeft in a post-race interview. "Thursday Night Motocross went really well. I won the heat and then ran up front with those guys all the way to the finish and came away with third. It was a great foreshadow for Saturday. Practice at Washougal went well, and the team had my bike working great on the track. I got an awesome start in the first moto, but got passed a little ways into it. Once I settled down a bit I was able to ride smart and fast laps. This is only my second Pro National so I'm really excited to come out with an 11th overall."

Rocky Mountain ATV/MC-WPS KTM’s Dakota Alix put in his best ride of the season, going 12-12 for 10th overall. It’s the first top 10 finish of his 450 career.

Privateer Fredrik Noren, who usually does well as Washougal, finished a season-best seventh in the second moto. His overall was ruined in moto one when his wheel bearing blew out while he was running inside the top 10. He was able to finish the moto in 20th and took 13th overall on the day.

Washington native Tommy Weeck was back in action for the first time since racing Washougal in 2015. Weeck went a solid 15-15 for 15th overall. “My wrists are black and blue, my backs sore, and my blisters are serious! I now remember why I haven't raced a national in a few years. All in all for not getting near the seat time prior to the event needed, @jmrsuspension and myself had one hell of a day,” he wrote on Instagram.

GEICO Honda’s RJ Hampshire has been on fire as of late. Since returning from injury at High Point, Hampshire has shown speed, but has dealt with a lot of mechanical problems. He’s remained positive, and now the speed is finally turning into solid results. Since RedBud, he’s gone 5-4-5-7-6-2, capturing his first career moto podium in the second moto at Washougal.

“Washougal has been one of those tracks I struggled at. We turned it around yesterday,” said Hampshire in a statement. “Missed my shift first moto out of the gate and was way back. Had a pretty solid moto and came up to sixth, but knew I could run up there with a start. Got out of the gate good that second moto right behind Joey Savatgy. The opening laps I found really good lines and knew I could make the pass, but at one point I thought about waiting a little later so he didn't have enough time to pick up on my lines, but that would have been risky and I'm not going fast enough to make that type of call. So I made the pass to the lead and was feeling good, but I knew he was all over me. Once he got me back, I think around 22 minutes in, I still felt good, we were right there. Fell just short of a moto win and an overall win! It's been a bumpy road since my head injury, but I'm thankful to be able to show what I can do again and be battling in the front!”

Hampshire was in the running for the overall podium, and actually held third overall until the final lap when Dylan Ferrandis passed Adam Cianciarulo. In fact, the top six overall in the 250 Class were separated by just two points, with first moto winner Aaron Plessinger coming out on the short end of the stick, finishing sixth overall. Plessinger crashed early in the second moto and finished ninth.

While Hampshire is taking off, Jeremy Martin has been off. He struggled at his home race at Millville, and wasn’t near the front at Washougal. Despite his seventh overall finish, Jeremy did move into second in points ahead of his brother Alex, who missed the race due to injury.

“I don’t know what to say,” said Martin in a team statement. “Another frustrating day, but we’ll keep working.”

Monster Energy/Pro Circuit Kawasaki’s Justin Hill was sidelined for a second consecutive race. Hill, a native of Oregon, qualified 12th overall but wasn’t able to line up for either moto. According to a press release, the team said Hill sustained an injury earlier in the week which kept him out of the race. They did not specify the injury. Hill also missed Millville after injuring his wrist in practice.