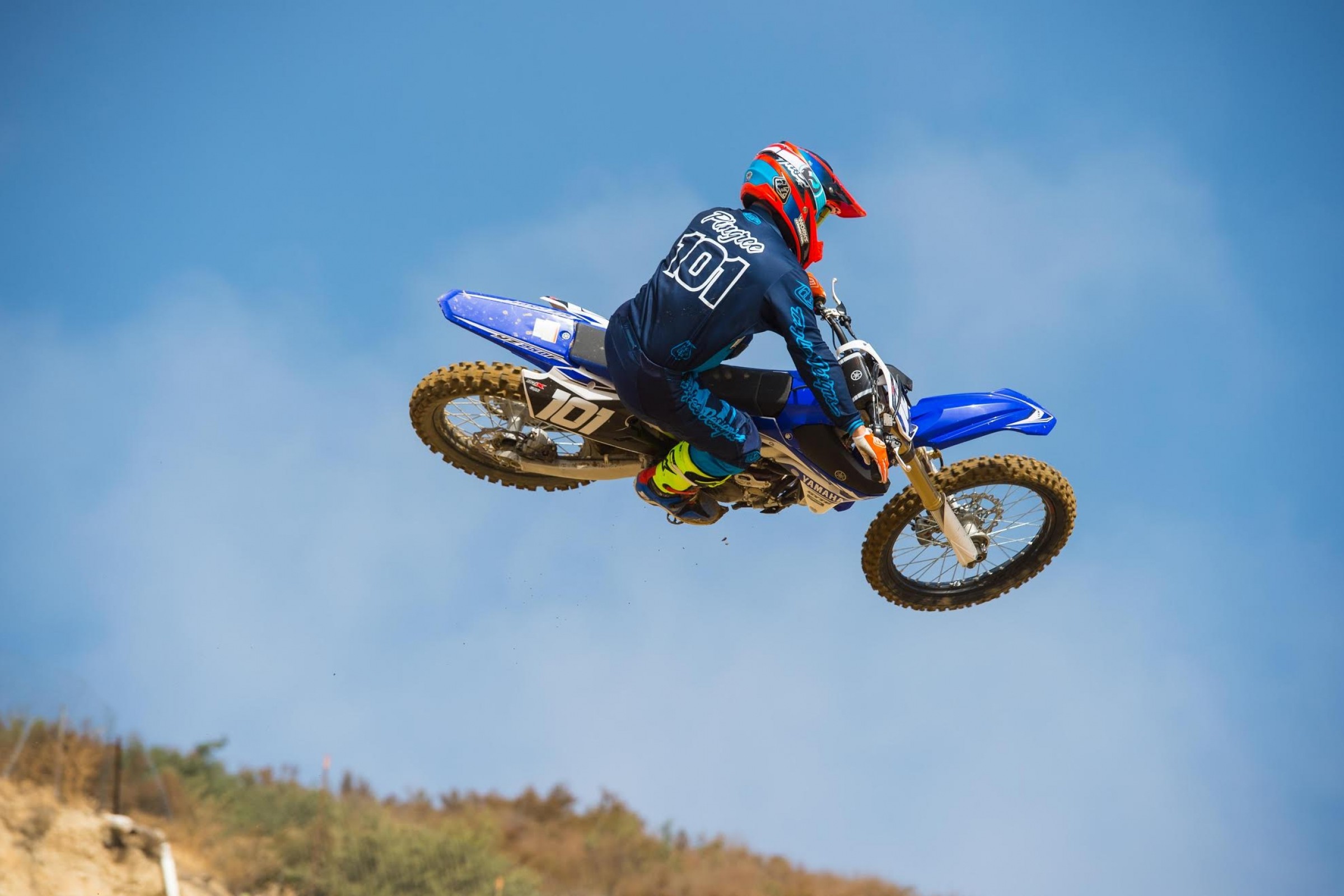 I understand Quantum Mechanics and can clearly see Einstein’s error in relativity concerning quantum gravity. I know Plato and Aristotle's theory of Subjectivism and Objectivism were diametrically opposed to each other. I even understand that Revelation 12:1 correlates to this Augusts Solar eclipse where all the planets align causing the end of Earth as we know it.

But the real mystery to me has always been how in the Hell do you know how to adjust your suspension clickers and which clicker does what and when and why????

PS: No need to mention air forks as I won't be buying one of those before the end of the world next month.

Glad to hear you won’t be wasting your time with an air fork between now and the end of the world; smart use of your time. I’ll try to give you the simple setup basics and hopefully shed some light on why you are turning each clicker.

Start with your sag. If you aren’t sure what those sag numbers should be, search for and refer to our Dialed In videos we did on each of those bikes. There are great starting points and even clicker settings in those videos.

Once the sag is right, go out and ride the bike. You don’t ever want to make more than one change at a time because you won’t know which change made the difference you feel on the track. When you do go out, keep it to a couple of laps. After that you tend to compensate for the characteristic of the bike and your sensitivity goes way down. If you can’t feel a difference in two laps then you can’t feel the change. Don’t be embarrassed to admit that.

From here you should start with whichever end is bothering you the most— forks or shock. On the forks you have a compression clicker and rebound clicker. The rebound clicker is typically set at 12 and it increases or decreases the speed that the fork returns to its fully extended position. You shouldn’t have to adjust this more than a couple clicks. The compression clicker changes the rate at which the fork compresses, hence the name. Both of these simply change the orifice diameter that oil is passing through. Turning the clicker in will make it firmer or slower, out will make it softer or faster.

A common mistake, particularly with forks, is responding to a firm/harsh feel in the front end by opening up the compression clicker for a softer feel. Many times, the fork is already too soft and it is riding down in the stroke where the valving gets stiffer. The fix is to turn the clicker in and make it firmer, but it is counterintuitive. My suggestion is to make big changes to determine the direction you want to go. If you aren’t sure if it should be softer or firmer, open the compression clickers up five or six clicks and go out for your two laps. You should feel right away whether it is better or worse. Now go back to where you were, plus five or six clicks the other way. Again, the difference should be significant and you will know which way felt better. You may need to split the difference in the number of clicks, but at least you’ll be going the right direction. Don’t overlook the ability to move the forks in the clamps as well. That can make your bike more stable at speed or quicker turning with a very small change up or down.

The shock is very similar except that there are high and low-speed compression adjusters. This can get tricky since low-speed turns into high speed through the stroke. But for the sake of simplicity, I’ll give you the basics.

The high-speed compression adjuster knob affects largely where the shock rides in the stroke. If you turn the knob in the shock gets firmer and rides higher in the back end. Conversely, opening up that knob will squat the rear of the bike down and give it a softer characteristic. This is all personal preference and, again, I’ll suggest opening up or closing it off a full turn to see which direction feels better if you aren’t sure. The low speed adjuster will give you a softer/stiffer overall feel when you open it or close it.

I recommend working on either the front or rear until you get it to feel comfortable, and then start on the other end. You may need to continue tweaking back and forth several times and even making subtle changes as you go from track to track, especially on that older 450.

I hope this gave you a little better sense of how to go about things; it’s tough to write it out in column form. Good luck!

I have been riding and racing motocross on and off since I was about nine years old. Now 47, I've had my share of burnout and tried transitioning to other types of riding; trials, street, off-road, but always managed to find my way back to mx. But this most recent stint has been somewhat of a fountain of youth for me. I leave the track feeling 16 all over again. Nothing compares, it's been amazing. But here is the problem: I've had more injuries in the past 3 years than the last 30. Nothing crazy, ribs, wrist, scapula, concussion...But at the ripe old age of 47 I find myself with a great job, amazing family, and no real life ailments to this point. I feel like I'm being selfish and stupid when I load up the bike but I can't get the "zen" moment anywhere else. People say MTB, but that's laughable. That's like dumping my wife for a "real doll."

I'm at a crossroads between my heart, my brain, and my balls. And yeah I get it, life is short...but wiping the tears from your little daughters face trying to convince her daddy is ok from the scary sterility of an ER bed truly sucks.

How can I keep it up? How can I stop?

Have you tried heroin? I haven’t, but it seems to provide quite a thrill for the homeless folks in my area, although you’ll probably be back to looking up at your kids from a gurney when you stop breathing and the medics have to revive you. Seriously, this is a very real issue for a lot of guys. Most of us are too dumb or stubborn, or both, to hang it up but the consequences are severe when things go wrong. I would tell you to wear the best safety gear you can, ride within your limits and avoid tracks with big jumps, but even doing all that you can still get hurt. I have tried over the years to fill in the gaps with surfing, mountain biking, jet skiing, downhill skiing, and running into burning buildings. Still, there is nothing quite like the feeling of riding and the rush you get from it. I get it. And I’m not great at taking my own advice. I’ll start out on the vet tracks around here, get bored in three laps and end up sending every jump on the main tracks like I’m 20 years old with knees that don’t pop like a toddler stomping on bubble wrap every time I get up out of a chair. There is a great Hunter S. Thompson quote that I lean on when I start to second guess the path I steered my life down, which has left my body much worse for the wear. The renegade writer opined, “Life should not be a journey to the grave with the intention of arriving safely in a pretty and well-preserved body, but rather to skid in broadside in a cloud of smoke, thoroughly used up, totally worn out, and loudly proclaiming “Wow! What a Ride!”

Sure, Hunter experimented with more drugs and alcohol than Motley Crue in the 1980s but the man makes a good point. The bottom line is that if you can’t be happy without dirt bikes then keep riding. Just be smart about it and keep the rubber side down. And if you end up killing yourself in some radical crash at the track, may I suggest firing your ashes out of a cannon? It worked for Mr. Thomson.

I have a two-part question but it's on slightly different topics, I will try to keep it short, first off last week you mentioned there was a strong argument against neck braces, why is this? I wore a Leatt and never found it restrictive or uncomfortable.

Secondly I know he had a good weekend but what is your opinion on Justin Hill outdoors? He hasn't been anywhere near as sharp as he was indoors, and you would have expected him to be a title contender, after referring to the 250s as a pee shooter class and wanting on a 450 surely does this not hurt his chances of a good 450 ride or is the sx title enough to get him there? I'm not knocking him, all of them are fast just wondering is he maybe a bit burnt out from sx or what's up with him?

Thanks love the column,
Andrew

Some people argue that the braces create a lever and, in certain crash situations, could cause more serious injuries than the crash itself. Others feel like the restriction of the brace makes them more likely to crash. Other folks love them. With opinions and studies varying so much it just isn’t as cut-and-dry as wearing a helmet or boots. For that reason, I don’t like to suggest that riders be forced to wear them.

Justin Hill is certainly underperforming this summer. I expected him to be a little off the pace at the first few rounds because he stayed focused on supercross right up until Las Vegas, giving up testing and training time to stay sharp in that title hunt. But it just seems like his head isn’t in the game at the moment. He alluded to the fact that he was moving up in 2018 but I know he’s been shopping for 250 rides, so perhaps something fell through for him. Regardless, it is in his best interest to pull his head from its current, sunless confines and start posting some results outdoors. It’s tough to see a supercross champion struggle to break the top 10 at the Nationals.