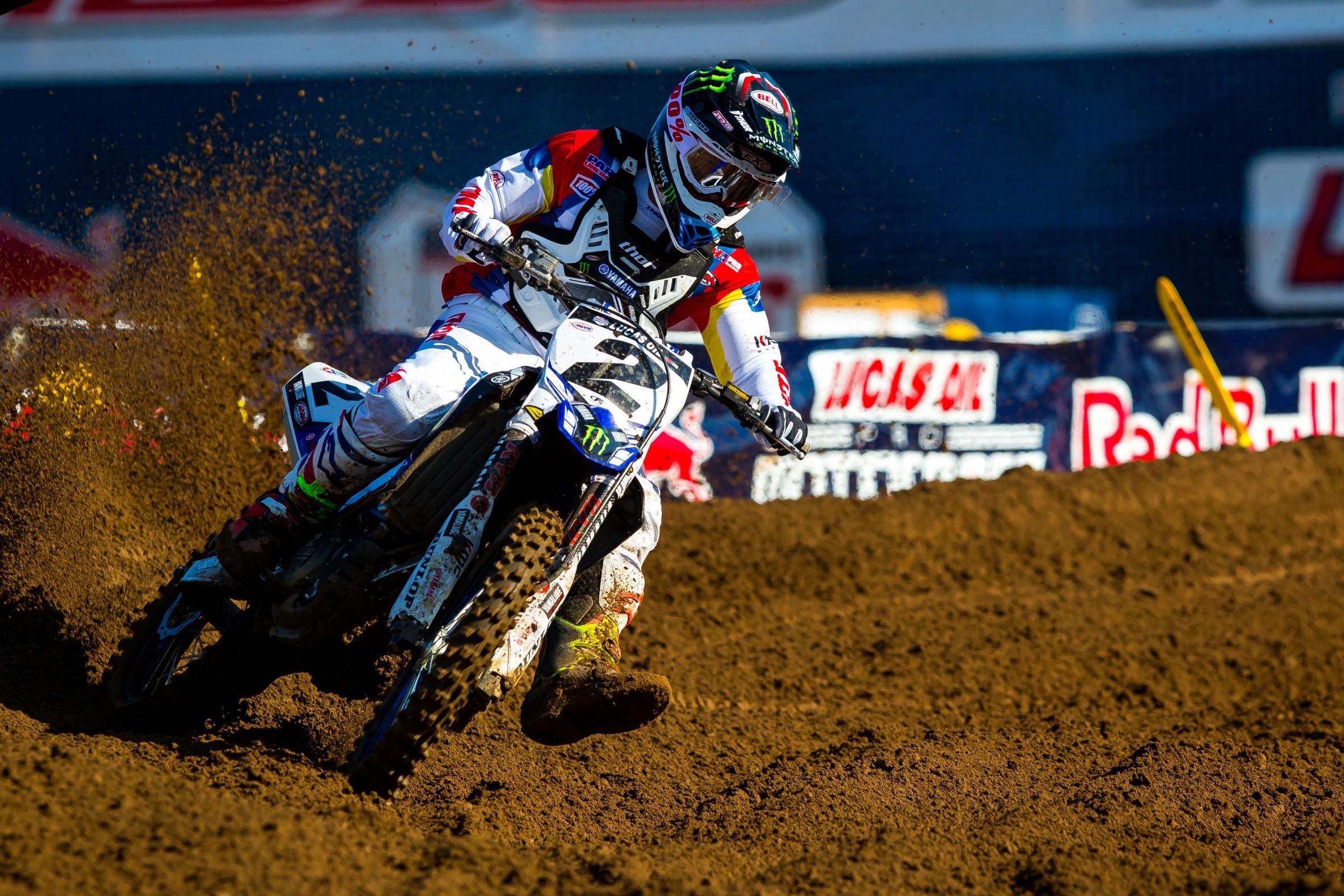 BLAKE BAGGETT – THUMB | IN
Comment: Baggett hurt his thumb when he crashed after he and Jason Anderson got together at RedBud. He didn’t fracture anything, but he did sprain his thumb. Earlier this week his mechanic, Nate Alexander, told us Baggett was all right, that “he’s a hardass,” and that pain doesn’t really affect him.

BENNY BLOSS – SHOULDER, HUMERUS | OUT
Comment: Bloss is planning on making his return to racing at Spring Creek.

Trey Canard - Banged Up | Out
Comment: KTM announced on Thursday that Canard was miss Southwick after a practice crash this week. According to the team, Canard did not sustain any bodily injuries, but the impact was bad enough that he’s elected to sit out this weekend.

DAVI MILLSAPS – WRISTS | OUT
Comment: Millsaps opted to undergo surgery after supercross to fix injured wrists. The original plan was to return to racing at some point this summer, but an official date has not been set.

MARVIN MUSQUIN – KNEE | IN
Comment: Musquin tore the meniscus in his left knee before High Point. Initially he said he’d be riding to salvage points, but after RedBud, where he went 3-3 for third overall, it’s probably safe to say he’s feeling better.

KEN ROCZEN – WRIST, ELBOW, FOREARM | OUT
Comment: Roczen suffered a big crash at Anaheim 2 and is still recovering from injuries to his wrist, elbow, and radius (forearm). We chatted briefly with Ken at RedBud to see how his return is coming along.

BROC TICKLE – SHOULDER | OUT
Comment: Tickle dislocated his shoulder during practice at RedBud, yet still somehow managed to race, going 18-17 for 17th overall. In a press release following the race Tickle said he planned on giving it a go at Southwick, but we’re still waiting on an official word from the team.

[Update: Tickle will miss the remainder of the Lucas Oil Pro Motocross Championship due to several injuries to his shoulder. You can read more about the injuries here.]

COOPER WEBB – BANGED UP | IN
Comment: Webb was involved in a nasty crash off the start at RedBud. Fortunately he’s okay and will be racing at Southwick.

MATT BISCEGLIA – FOOT, LEG | OUT
Comment: Bisceglia is shooting for a return to racing at Spring Creek.

CAMERON MCADOO – SHOULDER | OUT
Comment: McAdoo reinjured his shoulder at RedBud and will miss Southwick.

MICHAEL MOSIMAN - SHOULDER | OUT
Comment: Mosiman missed Muddy Creek and RedBud with a shoulder injury. He’s out for Southwick too.

MITCHELL OLDENBURG – COLLARBONE | OUT
Comment: Oldenburg hit a downed bike at Glen Helen and broke his collarbone. His team says he may be back for the last three races.

JERRY ROBIN – FOOT | IN
Comment: Robin injured his right foot during the second moto at High Point. On Instagram he said he’d be back for Southwick.

JORDON SMITH – BACK, MCL | OUT
Comment: Smith was back for High Point after suffering a back injury in Las Vegas, but didn’t end up racing after crashing in practice. He’s also dealing with a torn MCL and says he’ll “be out for a while.”