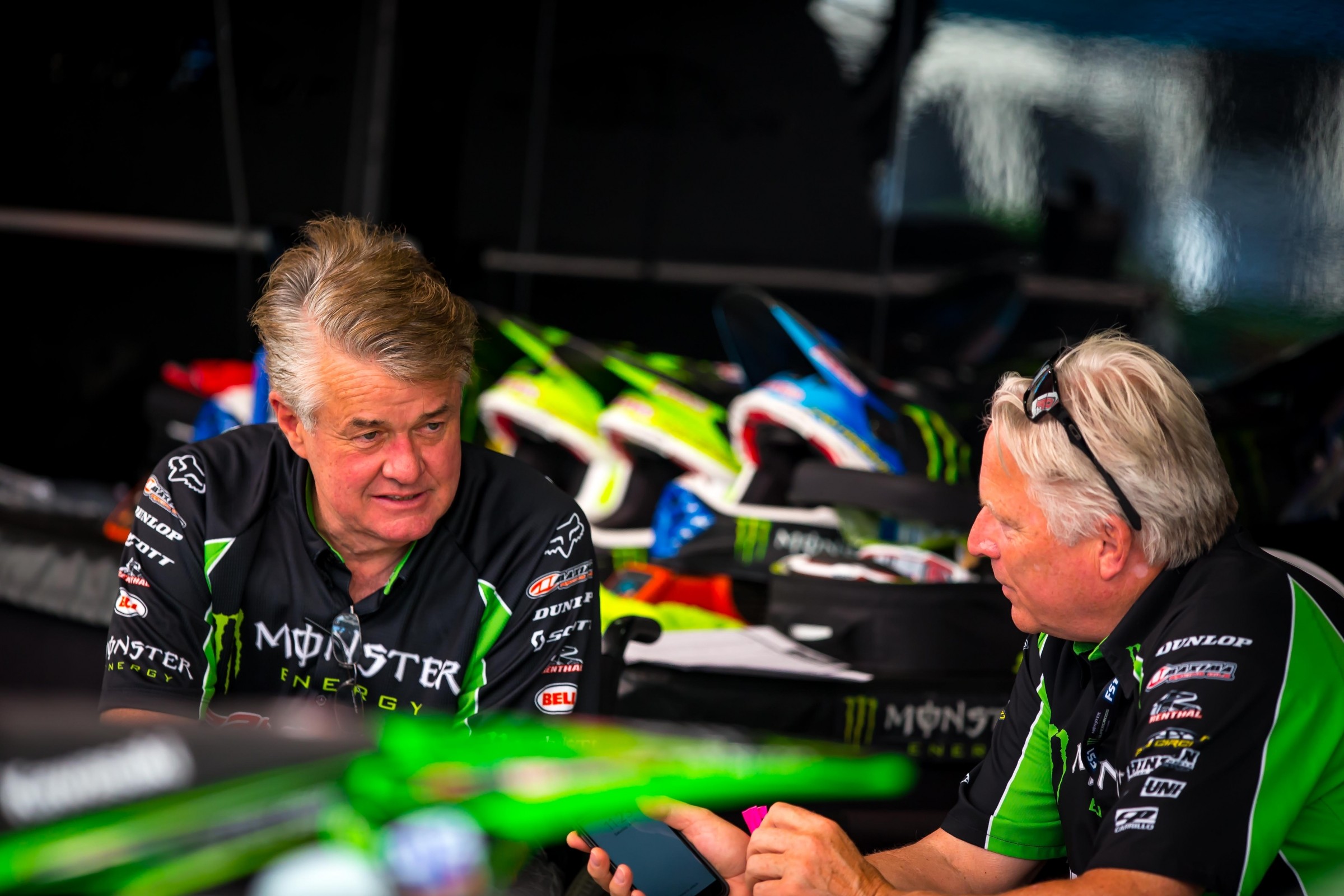 The 2017 Lucas Oil Pro Motocross Championship has not gone the way many expected it to go for the Monster Energy/Pro Circuit Kawasaki team. From struggling with bike issues early in the season to simply not having riders finishing where they are expected to, Pro Circuit has had a tough go of it so far.

Our own Steve Matthes caught up with the team manager, Mitch Payton, to see how he feels the season has gone and where he thinks their struggles are stemming from.

Racer X: First of all, I wish every National was like this, huh?
Mitch Payton: Yeah. The attendance was awesome. They obviously killed it again.

How do you feel about The Leap being moved though?
I never went and looked at it, but I guess sometimes the Lites [250] guys were doing it, so I guess it’s still doable, but a lot of times it looked like they weren’t doing it.

As far as the day for your team, it’s been up and down for you all year. Not the greatest day for you today.
No. If they got a good start they fell down. If they got a bad start, they just moved up. So, the starts weren’t great. Austin [Forkner] actually first moto had a pretty good start. The second moto he was right behind [Jeremy] Martin when Martin went down and he fell down. Got to work on starts. I think they need to work on a lot of stuff.

Let’s start with Joey. Won Lakewood. I kind of thought … I wrote that was going to be kind of the breakthrough he needed to do after the first few rounds of not so well, but it hasn’t happened since then. I was talking to O’Show [Johnny O’Mara] a little bit about it. What’s your take on Joey’s season so far?
Sub-par. Not as good as last year, by far. Not really positive we have what it is. I don't know. Just today said he didn’t feel comfortable hanging out or whatever, but we tried stuff all day long, tried to make it better, and I don’t think we ever really made him comfortable no matter what we did. So, I think we got a little bit of work to do chassis-wise to get him comfortable. I don’t really know. Colorado was easy and he ran up front. Martin was behind him and he just rode great. Then today he just wasn’t in it.

We talked about your team a little bit last week on one of my dumb shows. Someone pointed out it’s a brand new KX250F this year. That’s a good excuse, except you had a killer supercross season. Does that fact come into play when it comes to the outdoors at all? You have had some mechanicals. Riders are still maybe not doing as well as we thought. We don’t blame the bike, but do we talk about the new bike at all?
There was some stuff that we had to learn. I think last year’s bike towards the end of its career, I think everything was pretty dialed on it. Then the new bike was enough different that everything just didn’t carry over, so we started kind of over. It took us a few months to get where we thought we were good enough with it. Then I think we were good. In supercross it looked like we were good. Outdoors I want to believe we should be better. I think we did everything to where they said they were comfortable. They were happy. All that what they say, but maybe we got a little bit more work to do. I’m not blaming the bike. I look at a lot of it like all the guys go fast. Their lap times are all similar. Even the first moto where Austin was fourth, he ran 2:06, 2:06, 2:06 when he was in fourth, same as the top three guys. Then he made a pretty big mistake in the back, almost crashed, and then he fell off that gap. He said the track changed and he didn’t know where he thought the great line was. Then all of a sudden he started running 2:08s. So, it’s a matter of believing and just hanging it out. I see [Zach] Osborne and I see Jeremy Martin and if they get a bad start, they still are capable of going through the pack and working up. That’s what we have to be able to do. We say a bad start—nowadays if you’re sixth or eighth, that’s a bad start. You need to be in that top two or three in order to be in that zone or that pace. That allows you to kind of get rolling to where you got everything dialed and then you can keep going.

Hill hasn’t had a very good outdoors. Qualified well today in that first moto. Of course, he goes down, kind of continues the terrible outdoors. But that second moto was something to build on, right?
Yeah. He was third and then he was fourth or something like that. I don't know. He was right there. He was in fourth. He rode good. Then Osborne caught up to him and then basically where he was his lap times kind of came down and they stayed consistent. Then all of a sudden, he made a big mistake and the same thing happened. Osborne got by, then [Dylan] Ferrandis got by, then his lap times slipped. Only at the very end did he pick them back up. They’re sending it. The class is really deep right now and everybody is going fast. Alex is fast…. You put Mitchell Harrison—all of a sudden he’s right up front and he’s running it. Then towards the end it kind of came apart a little bit, but that was a good ride for that kid, too.

Anything you can tell us on Savatgy and AC’s contracts for next year? You going to keep them, you going to let them go? AC going to retire, go to the GPs or anything?
No, we want to keep both of them. We’re good.

Give me a percent if you can on keeping them.
My percent? I want 100 percent.

How close you are to it.
We’re really close. We’re good.

80?
I think you’ll see both of them there next year. Then we got one spot, and that depends whether Hill wants to ride a 450 or if he wants to ride a 250 then he’ll stay here.

And AC not going to be a professional spinner?
No, but he’s good at it. He needs to do more starts, less spinning.