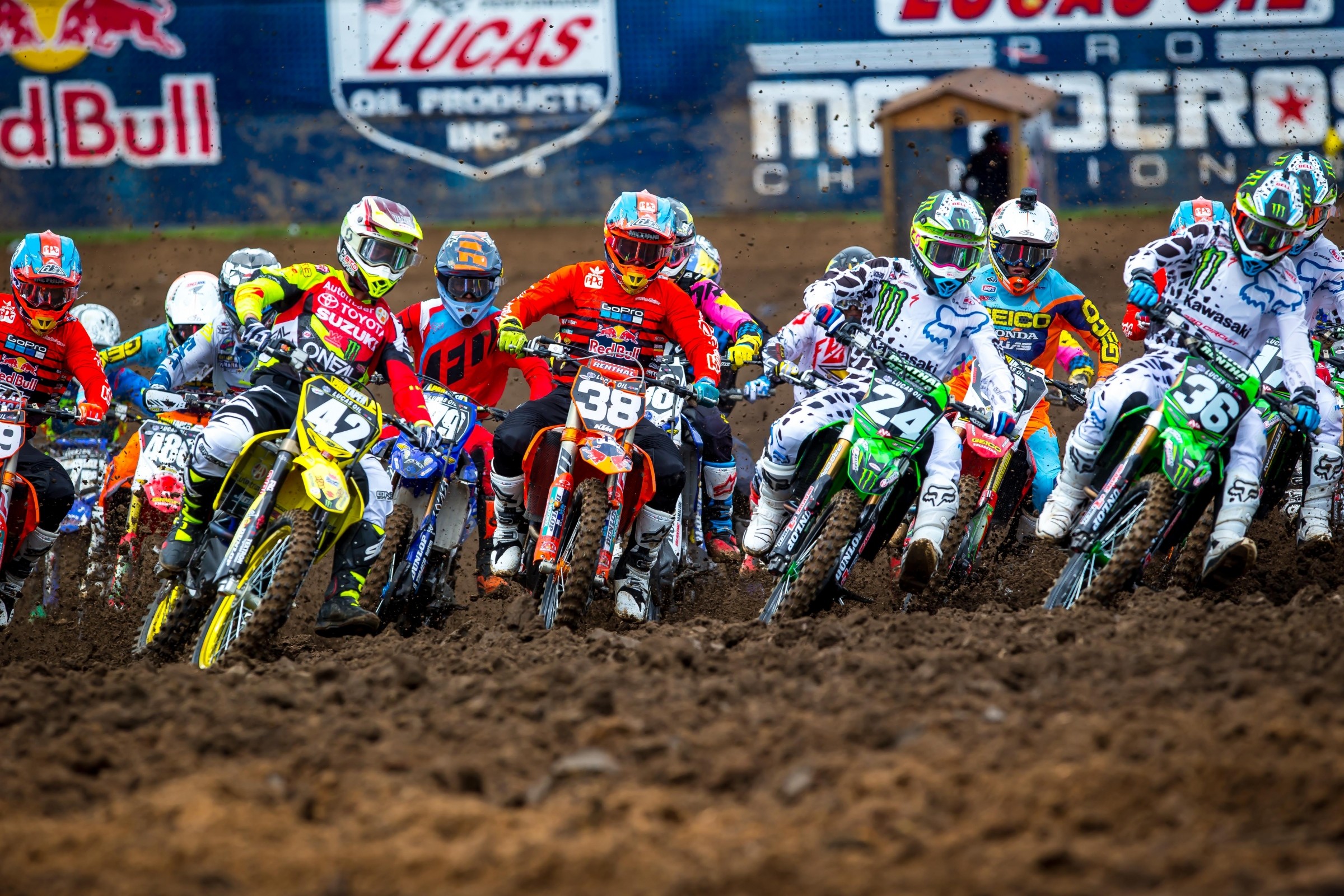 The championship chases in the respective classes went in opposite directions at Muddy Creek. While Eli Tomac closed to within four of Blake Baggett in the 450 Class, Jeremy Martin’s 13-6 day in the 250 Class cost him 18 points on the day (he’s 36 back in the championship) and slid him behind his older brother Alex to third in the championship. Zach Osborne holds a 31-point lead over Alex heading into round six this weekend at RedBud.

How did the race unfold? Let’s dive into the lap charts and look at a couple key moments from last Saturday. First, our traditional lap charts.

While Jason Anderson was trying to make his way around Trey Canard and Justin Bogle, Eli Tomac was taking off with the second moto win. Tomac’s opening laps of 1:53.845 and 1:52.667 were nearly three seconds and a full four seconds faster than Anderson’s 1:56.305 and 1:56.686. Once Anderson moved into second on lap three, Anderson attempted to reel Tomac in and dropped down into the 1:52s on three consecutive laps. Well, Tomac responded and put in two 1:51s and was never challenged en route to the second moto win. The chart below shows the chase—Anderson bringing the heat on lap five, and Tomac responding.

Baggett Down the Stretch

The other major storyline from the second 450 moto was another incredible charge from Blake Baggett. The points leader was down in the first turn with Cooper Webb and Broc Tickle and charged back from nearly dead last to third in the moto. If you were paying attention to live timing late in the moto, you could see Baggett was, at times, going two to three seconds faster than those riders in front of him. Check out a side-by-side chart of the last 10 laps and the times Baggett and the riders in front of him were running.

For 35 of 36 laps on Saturday, Alex Martin had nice view of Austin Forkner’s rear end. The two were separated by just a second or two for the entirety of both 250 motos on Saturday. On the first lap of the first moto, the two ran third and fourth. They finished third and fourth—with no passes.

In the second 250 moto, they ran third and fourth beginning on the second lap. They finished third and fourth—with no passes. Alex had this to say on Instagram after the race: “4-4 for 5th O/A in Tennessee... That's what happens when you sit behind the competition for 70 mins straight...”

Check out a side-by-side look at their times at the end of both motos.