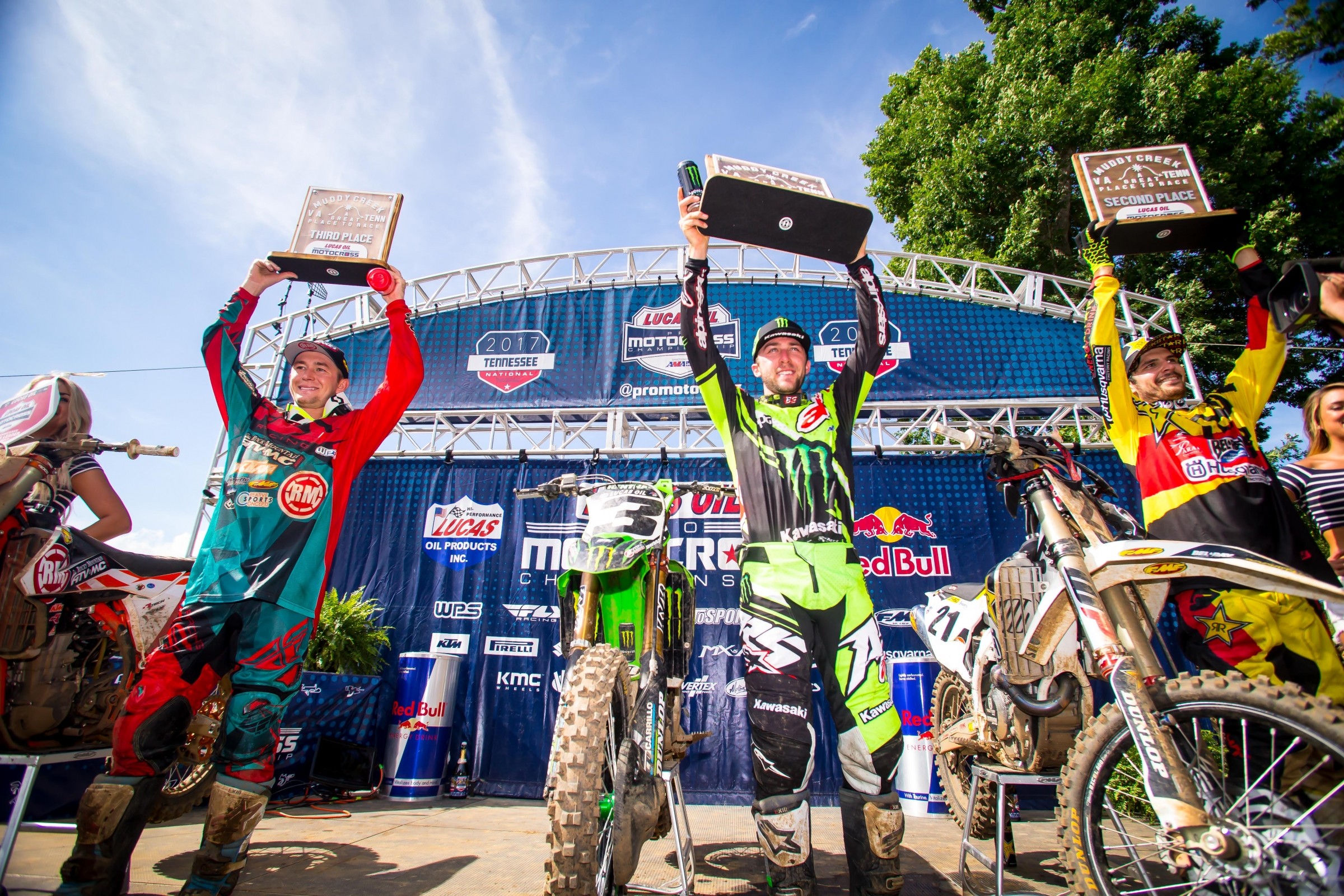 Monster Energy Kawasaki’s Eli Tomac bounced back to the top of the Lucas Oil Pro Motocross Championship podium with a 2-1 at Muddy Creek Raceway’s Tennessee National. Jason Anderson took another swing at his first career overall win by winning moto one on the Rockstar Husqvarna, but Tomac had him covered in moto two. Points leader Blake Baggett had a so-so first moto with a third, but put in a spectacular charge in moto two to come from last to third on his Rocky Mountain-WPS KTM.

Racer X: Eli, we haven’t seen you on top of the box since Hangtown first round. We’ve seen spectacular rides from you, but not able to put two motos together until this weekend. Does it feel good to be back up on top of the box?
Eli Tomac: Yeah, it’s been a long time coming, really. It’s been over a month now, exactly a month. I had a couple goofy mistakes in a few races. A couple tip-overs and one little mishap. We’re supposed to be here. We were looking forward to this weekend.

We didn’t get to see you on the podium at I believe Colorado or Mount Morris. Take us through that rough weekend you had in Colorado.
Tomac: Colorado first moto was the tip-over. That didn’t help at all. It was just a little bit of an off-day. I don’t really know what to say. Some days are good, some days are not so good. Just went away from that race and tried to fix the bad things and get out to the next weekend.

Jason, you pick up that moto one win. It seems like we always see you have havoc on the first lap or get a bad start. Finally getting a good start right behind Justin Barcia there, passing him quick. Do you feel like the starts are something we’ll see pretty normal from you getting out front early?
Jason Anderson: Yeah, for sure. I hope so. Definitely it helps. It makes life a lot easier. I feel like that first moto I got a good little gap. It’s like a breath of fresh air. I was excited to make that happen. At the second moto, I feel like I had a pretty good jump. I was up there and battling for the holeshot, but just got bumped a little bit and shuffled back. Then by the time I was behind Trey [Canard] he [Tomac] got away a little bit and I couldn’t catch him. He kept pulling away. But all in all, I was better than last weekend. The track was super fast. I’m excited about it.

Blake, going three-three on the day. Making it hard for yourself that second moto coming from the back of the pack. Take us through that second moto and what you were thinking on the ground the first time.
Blake Baggett: Ideally the holeshot would be the best. Laying on the ground, piled up. I just got hung up with Cooper [Webb] and our bikes got locked together. We both went down. It took us a while to get them undone. Just put my head down and tried to do damage control and enjoy it and have fun with it. The track was fun today. Just tried to do what I could and enjoy it.

Jason, last week after High Point you put out a tweet that said: “It’s crazy how much shit someone starts talking with more confidence.” Can you kind of elaborate more on that or share your feelings?
Anderson: The guy to my right [Baggett] has some pretty bold comments sometimes. I think we [I]can speak for basically the whole line [the whole class}. The dude rips for sure. He’s won the last couple races, but at the same time I feel like some of the comments are pretty bold. He didn’t break us today.

It’s no secret that there’s a lot of tension right now between you three guys. You guys are the quickest guys in the 450 class right now. Eli, in the press conference last weekend Blake had mentioned basically saying that when you had that mishap in the first moto, you were only able to come back 11th or 12th place in the first moto, and he came from last to first the week before. So, that wasn’t an excuse. I know these are kind of hard questions, but these are questions that we all want to know. What were your thoughts on hearing some of that stuff.
Tomac: For me it’s just small talk. I just let my racing do the talking.

We like seeing the tension up here. Blake, do you have anything to really comment on any of the stuff that’s been said?
Baggett: All you guys thrive on it. It’s just all fun. The question [last week] was if I gave him any confidence. That was what the true question was.

Blake, you said you wanted to make it fun in that second moto after a crash. Coming through the pack like that, that’s not generally something that we consider fun.
Baggett: No, but if you can work your way forward then you can make it fun and switch up the lines. You’re forced to take options that you wouldn’t take if you were out front. It’s a long series, so if you can get back to the podium from being down in the first turn, I look at that as a good day.

Eli, your results weren’t what you wanted I’m sure, but you’re still riding okay. Have you actually really made any changes since Hangtown, or are you just doing the same thing and just waiting for the day to actually work out?
Tomac: I’ve left everything the way from Hangtown. Just got to have everything fall in place to win these overalls. I had a few just goofy things happen these past few races.

Blake, can you talk about your first moto? Second moto charge was good, but how did the first moto go?
Baggett: First moto was good. Just got out-rode by these two guys. That’s the bottom line to it. They were faster and the results showed it.

Jason, going into the second moto, you’ve been saying so much how badly you want to win the overall. Was that in your mind when you went to the line, like today can be the day? I did the damage that I needed to do in the first moto? This could be it? Were you thinking that?
Anderson: Yeah, for sure. I had a good first moto and I felt like I was out front and it was good. It was the most drama-free first moto I’ve had all year. I was excited about that and felt like I had the energy and everything to put in a good battle. The second moto I was trying my butt off but I think I was trying a little too hard. But all in all, everyone was ripping. I was glad I put myself in a position to win the overall. That’s the first time I’ve ever tied for points overall. So, I feel like it’s a step in the right direction, but at the same time I need to keep grinding. Just keep trying my best and hopefully that overall will come. It will be sweet when it does.

All three of you are within 19 points and there’s only four between you guys [Baggett and Tomac] as we get to the halfway mark. It’s really that close. Can you guys just all comment on how close and competitive it’s been this year? It’s been a while since it’s been this wide open.
Tomac: It is open field right now. We’re four rounds in and it’s all really close. No one’s ran away with it all. May the best man win.

Jason, you seem to be having really good qualifying times. You’ve been on top of the board in a lot of the practices. Kind of expect you to be out front in timed qualifying now. That first moto the track seemed a little bit smoother. Do you feel like that suits your style a little bit more maybe? A smoother racetrack where you can hang it out a little bit more on? Don’t have to be quite as precise?
Anderson: Yeah, 100 percent. I think as far as Blake’s riding style and stuff like that, he is better than me on the more rutty tracks. I feel like how my first few year of turning pro and my first year in 450 I became a lot better at riding some of the tracks. I feel like Glen Helen the second moto I won that moto and I felt like I rode that track pretty good. Last weekend I wasn’t that good in the second moto. I got third, but still these guys beat me pretty good. I’m just working and trying to become better at everything. I definitely feel like when the tracks are a little bit more open and stuff I feel like I am a little bit better.

Being from New Mexico, you probably don’t grow up riding black dirt like this. Looking at the next three rounds we have RedBud next weekend, then we go to Southwick and after that we’re in Millville. So these are three tracks that possibly could suit your style being from New Mexico?
Anderson: Yeah, for sure. I feel like I’m really good at the tracks where it’s rutted but it also kind of moves a little bit. Not like the High Points where you get that hard, crusty, real choppy, rutted stuff. I feel like RedBud, Millville and Southwick, I’ve podiumed all those races. So, I really feel like these are some of the races that I can do some damage at and ride with the boys here. We can have a good time. I really look forward to Southwick.