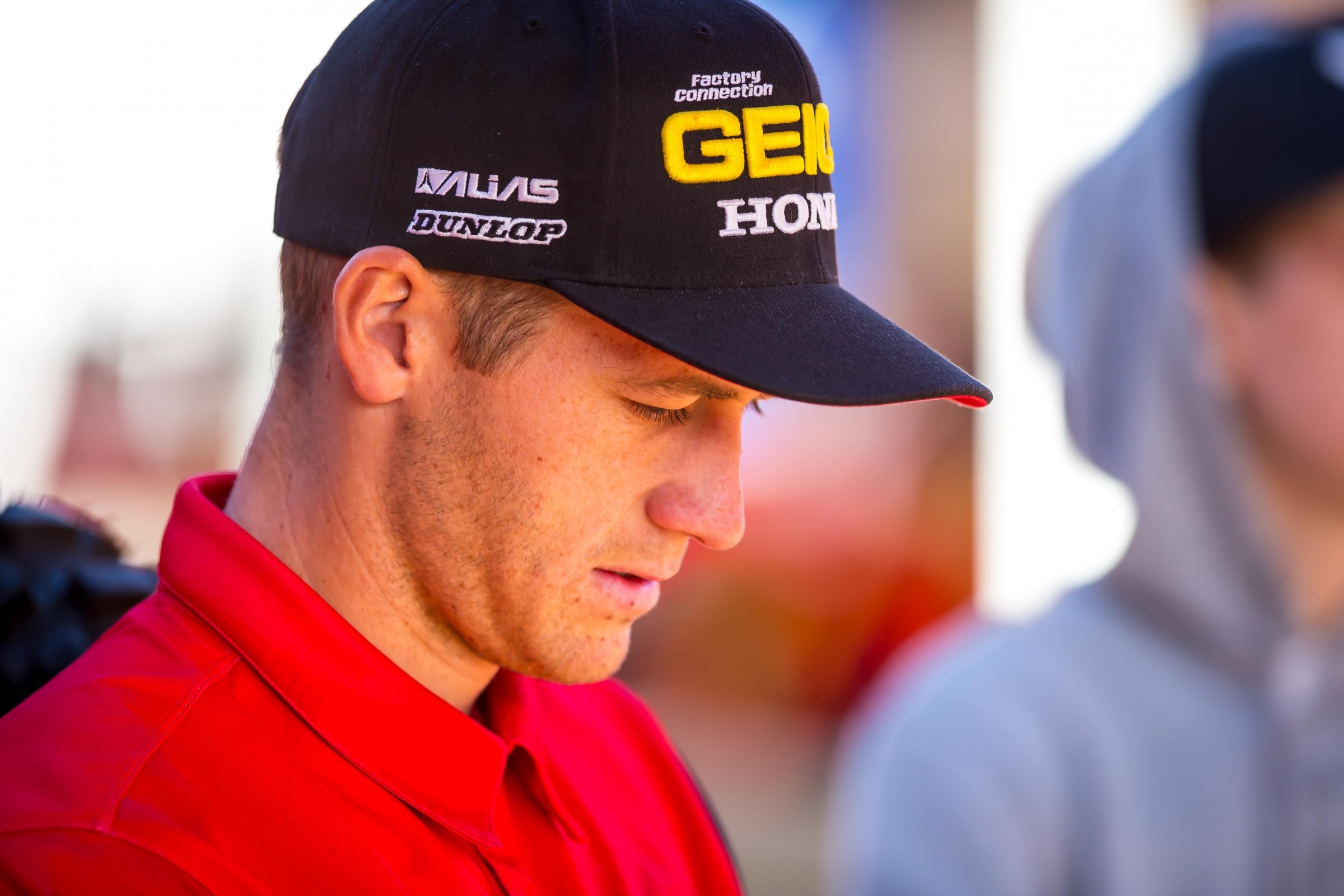 The last time we saw Christian Craig he’d just taken fourth in the first moto at Glen Helen and was running third in the second before crashing and sustaining a boxer’s fracture in his left hand. Intent on making a quick return, Craig had surgery just a few days after the crash and has been focusing on getting back to racing as soon as possible, which happens to be this Saturday at High Point. If he picks up where he left off at Glen Helen we might have yet another podium contender in what’s already proven to be a wild 450 Class. –Aaron Hansel

After starting the year out light on riders, GEICO Honda’s trailer will be full this weekend at High Point. RJ Hampshire will be returning from a fractured tib/fib suffered in Toronto, while rookie Chase Sexton will finally make his long-awaited professional debut after breaking his femur during practice in Atlanta. Cameron McAdoo returns after missing Thunder Valley due to a big crash at Glen Helen. It’s been a while since Hampshire and Sexton have raced a motorcycle, so expect this weekend to be more about getting into the flow than anything else. -Hansel

Blake Baggett’s win at Thunder Valley wasn’t the world’s biggest surprise. After all, he is a former 250 National Champion and there was a fair amount of buzz regarding his speed coming into the season. But still, nobody expected him to win on the same day he crashed in the first turn of the first moto. And in the second moto he even passed Eli Tomac and proceeded to check out! Afterward Baggett said the goal was to “break” Tomac, something Tomac’s done to everyone else many times. We’ll see if Baggett can keep Tomac down for another round at High Point. -Hansel

When racers line up this weekend they’ll race on a track that recently received its biggest makeover in 40 years. The start gate is in a new location, the start straight is longer, there’s more elevation change, and there are several new obstacles. Best of all, the changes are expected to improve viewing at what was already one of the best tracks for spectating in all of Lucas Oil Pro Motocross. It’s going to be interesting to see what the riders, particularly the veterans, think of the new and improved High Point. -Hansel

After a relatively slow start to the season (which included a mechanical DNF in a moto at Glen Helen), Joey Savatgy got back to being the real Joey Savatgy by winning his first overall of the season two weeks ago at Thunder Valley. The bad news is he’s already facing a sizable deficit (26 points) to championship leader Zach Osborne a quarter of the way into the season. It’s certainly not insurmountable, but there’s not much room left for error either. He won at High Point last year with 4-1 scores, and he’ll help his cause if he can do it again on Saturday. -Hansel

In his brief run with Red Bull KTM here in the United States in 2014, Dean Ferris never raced a round of Lucas Oil Pro Motocross. Ferris injured his wrist while practicing in Australia and never returned to action. Following a return stop in the FIM Motocross World Championship with Husqvarna, Ferris returned home to Australia where he won the MX1 championship in 2016. The current points leader in the Australian Nationals MX1 class will make his long-awaited Pro Motocross debut this weekend at High Point riding the 450 Class while the Australian series is on a five-week break. Ferris will ride his CDR Yamaha and pit alongside CycleTrader.com/Rock River Yamaha. –Chase Stallo

Rockstar Energy Husqvarna’s Zach Osborne won the opening two rounds of the series and left Glen Helen with a commanding 21-point lead over Adam Cianciarulo. His lead was trimmed to just nine (over Alex Martin) after he struggled to 8-5 finishes at Thunder Valley. Don’t expect those results to continue though, as Osborne was dealing with an illness leading up to the event and said post-race “I’m happy to survive and leave here holding on to the red plate.” Growing up in nearby Virginia, Osborne rode High Point a few times a year as an amateur and went 1-4 for second overall there a year ago. Can he stretch his lead back out this weekend? –Stallo

We’re in the midst of an historic run in Lucas Oil Pro Motocross. Not since 1998 have we seen five moto winners over the first six motos. The last time we saw four different overall winners in the first four rounds was 2001, when Tim Ferry, Sebastien Tortelli, David Vuillemin, and Ricky Carmichael each won an overall at the opening four rounds of the championship. We’ve also seen two first time overall winners, with Marvin Musquin (Glen Helen) and Blake Baggett (Thunder Valley) each securing their maiden wins in back-to-back weeks. Could we see another overall winner this weekend or will order be restored? –Stallo

It’s been a strange start to the year for Cooper Webb. He’s sandwiched 9-10-34-22 moto scores between a fifth in the opening moto and a fourth at Thunder Valley. He didn’t finish the second moto at Glen Helen for unknown reasons. He pulled in early at Thunder Valley in the first moto only to go back and finish the moto. His season finally seemed to turn the corner in the second moto in Colorado though, as he put in a great ride to secure fourth. A season ago, the North Carolina native’s season turned a corner once the series moved to the East Coast, as he reeled off eight moto wins en route to the championship. We’ll see if the same happens this weekend. -Stallo

With rain expected throughout the week leading up to the event, and daytime temperatures expected to reach 89 on Saturday, we could be in store for the hottest National of the season so far. It seems to rain every year leading up to High Point, so the track will be fine, but temperatures usually peak around the low-to-mid 80s—not low 90s. Also, humidity is expected to be 61 percent on race day. We’re about to see how did their work this off-season. -Stallo