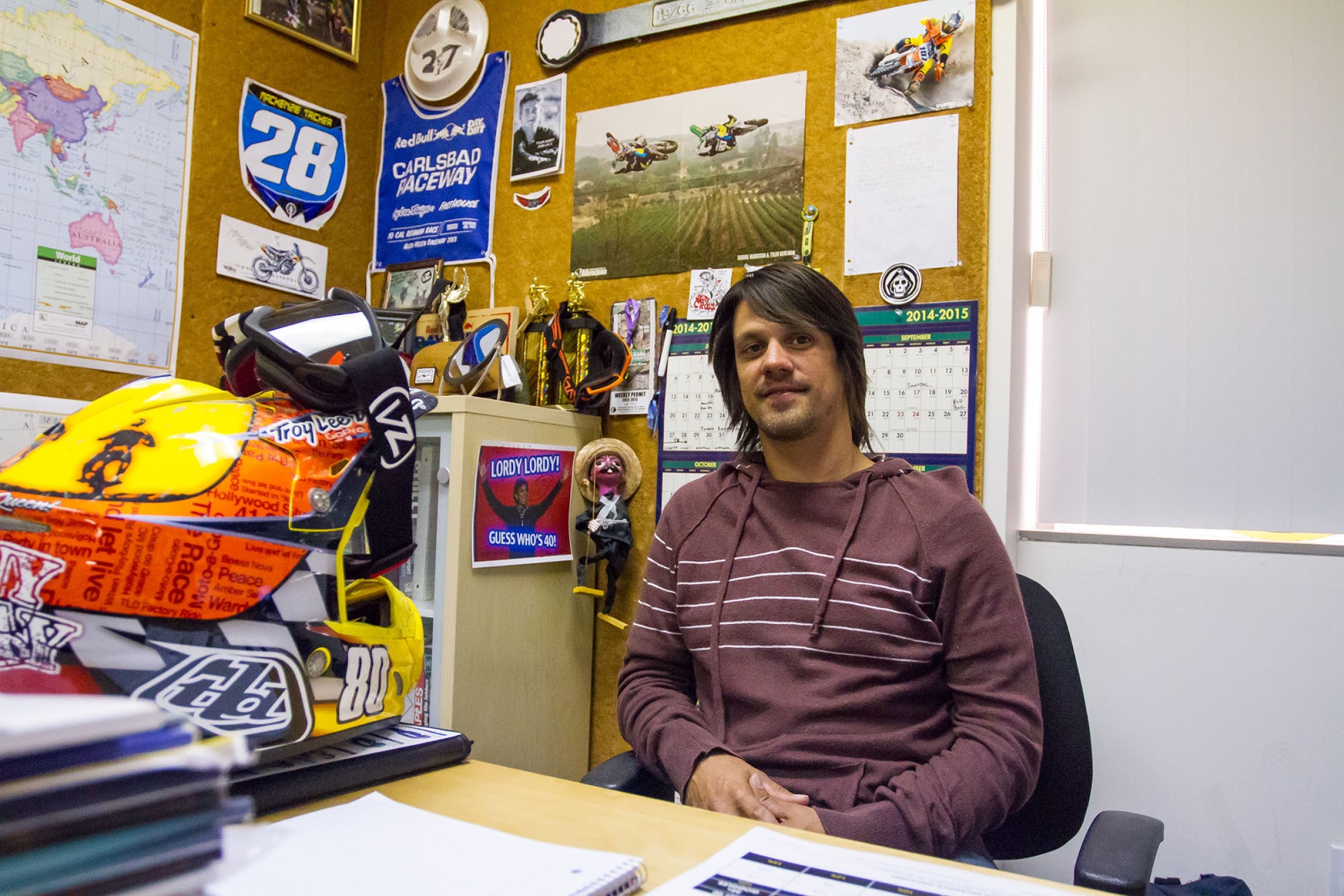 Pat Lopez, better known as P-Lo, is full of energy and is one of the coolest and most connected guys in the industry. He’s been the motocross brand manager at Von Zipper for years and has had quite the journey throughout the surf, skate, snow, and now moto industries.

P-Lo grew up in Orange County, California in the 1980s, and everyone was riding everywhere, so he wanted in on the action. His dad was more of a golfer so it took some time and some convincing, but eventually they picked up a 1986 CR 80 for $750 and P-Lo was hooked—and he’s been repping number 80 ever since.

Hailing from Huntington Beach, it was fitting that his start was at Surfside Sports, a surf shop in Newport Beach. SoCal is the mecca for action sports so his move into the skate, snow and eventually moto industries were all natural progressions for his career. Throughout his career he’s also worked at World Industries, NHS (Independent, Santa Cruz Skateboards), Ricta Wheels, Transworld Media, and Answer.

P-Lo sustained a massive eye injury while working as a skate team manager, and wondering whether or not he could still ride his dirt bike was the first thing that came to his mind. His eye injury downshifted his lifestyle so to speak, or as he likes to say, “I was kind of living it up, kind of being a kook too. It went to my head. So I had that moment in life of suddenly backing it down. But that got me back into dirt bikes. Ever since then, 2001 or ’02, I bought a 125 two-stroke and put that number 80 on it, and no joke, I’ve been riding once or twice a week ever since then.” His eye injury isn’t funny, but it’s funny how sometimes a massive setback can reset you and bring you back to your roots.

Greg Tomlinson, the owner of Von Zipper approached P-Lo with the job offer years ago and he jumped at the opportunity. Von Zipper has that vibe that aligns with his personality and drive and he’s enjoyed the ride so far. I sat down with him a few weeks ago to see what the ride has been like and get some stories from the guy who’s been there and seen it all.

Racer X: What do you like about working at Von Zipper?
Pat Lopez: I think the freedom. We kind of joke it’s pass/fail. Greg Tomlinson [GT] expects you to hit grand slams. A few of us have been able to hit some grand slams in the past, and that’s kind of the only way. We run at a very high level, expectation-wise at least. You do have a lot of freedom to do what you need to do, but when you bum out the big man it’s a bummer. You take it home. I think that’s the difference here. Just being able to be who you are is probably the number one deal to be here. And then to infect other people to kind of be who they are too. Even if they’re like the Traders Yamaha team. They’re racers. They’re not going to go to the hills and risk that kind of stuff. But we encourage them to be who they are because we respect that gladiator, that warrior. Then we also let Tyler Bereman do what he wants to do. We thought they were going to go racing this year, but you know what? They’re not. But they’re not sitting around either.

Let’s hear some stories from your days in all these different industries.
Tarah Gieger [Puerto Rican motocross racer], I think most people know how rad that girl is. We end up going to our photo shoot. You have all these kind of wild people and we know we’re going to do our job but nighttime is going to get pretty fun, without question. And not everybody has to drink beer to have fun. That’s not what I’m saying. But anyway, Tarah shows up with this machete, this hatchet thing. Shows up with a hatchet and starts throwing it against this tree. She’s dead serious about this hatchet and getting super into it. This hatchet thing is becoming like a thing. All of us all day and night throwing this damn hatchet. She’s in her leopard garb. That girl is something else. I think she encompasses that freedom that the Freewheelers kind of are.

I think something that has really surprised me is getting to know Tyler Bereman a lot more and realizing that that guy has flat track roots. He comes from a very rooted motorcycle family from up north. I think a lot of people always assumed he was a SoCal kid, but that kid’s won a Loretta’s championship [College B/C (17-24) 2010]. He can make a main event in a supercross race. You see him and his dad and his grandpa go do some flat tracking, and it will put chills up your spine. They want to haul ass. His dad hauls ass. He’s a ripper on a dirt bike and he can do all these things, but don’t let him fool you. That kid, just like anyone else, pulls off the track and is pissed off and you have to leave him alone. You think that side has left him, but no way, it’s still in him. I think that has been really cool for everyone here, to help tell his story with the Hell on Wheels races and things and showing him and his dad. That’s really cool to be able to kind of bring that side of him out. I think again that goes back to the freedom that Von Zipper allows.

Then obviously Josh Grant is just a legacy dude. He’s just a bad dude on a bike, and everyone knows that. It’s really fun to be a part of this. Everyone knows his story, but to kind of just see him do this and just have that raw openness and get that phone call: “Hey, boys, I just signed a factory Kawi deal. Is this thing on speaker?” To hear that side of Josh that does not come out. I’ve known him for a while, but just to see these other sides of him and this part of his career. He’s never been someone to just blow smoke on a podium or whatever, he’s dead serious that he’s enjoying this ride. He really is.

How has the ride been for you?
It’s been a little wilder at times than I thought. Maybe sometimes it’s my own doing. Coming into this thing just kind of rebuilding what they had left off with, it was quite a bit of work. We’ve been with Tucker Rocky for a bit. Big supporter of ours. We can’t thank them enough. But as far as myself, I’ve learned a lot and definitely been able to apply a lot of the things that I’ve learned along the way. Going back to it, that freedom of being able to be like, “You know what? I’ve seen this work before,” or “this is what I believe.” We get in a room … I deal with him, and that’s it. When we get the things signed off on it’s either signed off on or it’s not. So there’s some things that you don’t get to do, but the touchy-feely, pop a wheely and have all you guys covering it and truly enjoying what it is, has been really, really fun. The ride’s been amazing, just getting to know everybody a little bit better and getting to know myself and still being able to ride my dirt bike. I would not do this if I did not ride motorcycles. It doesn’t bother me that some people don’t do it, I just can’t understand how people can be involved day in and day out of this stuff and not actually go and enjoy a dirt bike. Some people say you ride less because of it [working in the industry]. They’re not wrong. But you also have to make the time.

What’s a day in the life at Von Zipper like for you?
I’m the motocross brand manager. So I do everything from sales to marketing and in-between, whether it’s hiring athletes, taking the content and getting it to the reps, or whatever it may be. I’m just sort of along with a couple of people here orchestrating what’s been going on. I think it’s very fast fashion these days. Everything’s happening fast. It’s like you really have to be able to put campaigns together, put programs together for the sales side and the marketing side, but you also have to know how to sprint. A day in the life is just gathering content, putting it out to reps, reaching out to you guys for new products, talking to accounts a lot. A lot of things I always say happen on tailgates. So if you just get on the phone and talk, text, and email is awesome, but I think there’s something about tone of voice and passion that we all share. It’s just sometimes you have to get on the phone to do it. I think that’s an important part of what I do on the day to day. But you make product, you market it, and you sell it. That’s it. That’s what everyone’s doing. Make it, market it, sell it. And you hope it’s really good.

Any secrets to share on the marketing side?
The secret behind it is that those motorcycles you see in the ads, those are ours. Those aren’t props. Those are really our dirt bikes. Honestly, I think the secret behind it is just the imagery. I think it’s the feeling you get when you see it, whether it’s Wee Man laying on a country road with a stripe painted on him, or if it’s Donavon Frankenreiter, an amazing musician. That guy’s amazing. He came on board as a surfer and floated down a river. Really quirky. It’s basically getting our athletes out of their element and putting them in there and then seeing how they are and how they adjust to it. I think everyone can relate with that, “Grandma needs a photo. Stand over there.” It’s like, hold this stupid trophy up. That’s what we were capturing, just this kind of goofiness.

What’s your favorite thing about working at Von Zipper?
My favorite thing is the people. I get to come in every morning and literally be inspired by either a funny story from the weekend, or just the creativity and the drive. The people here are so driven. They do it with a casual confidence. You have people that are running at a pretty high level, pretty casual, but it’s a high level. Like I said, we take it home with us, which is good and bad, but we do because we’ve all been a part of this brand since day one.