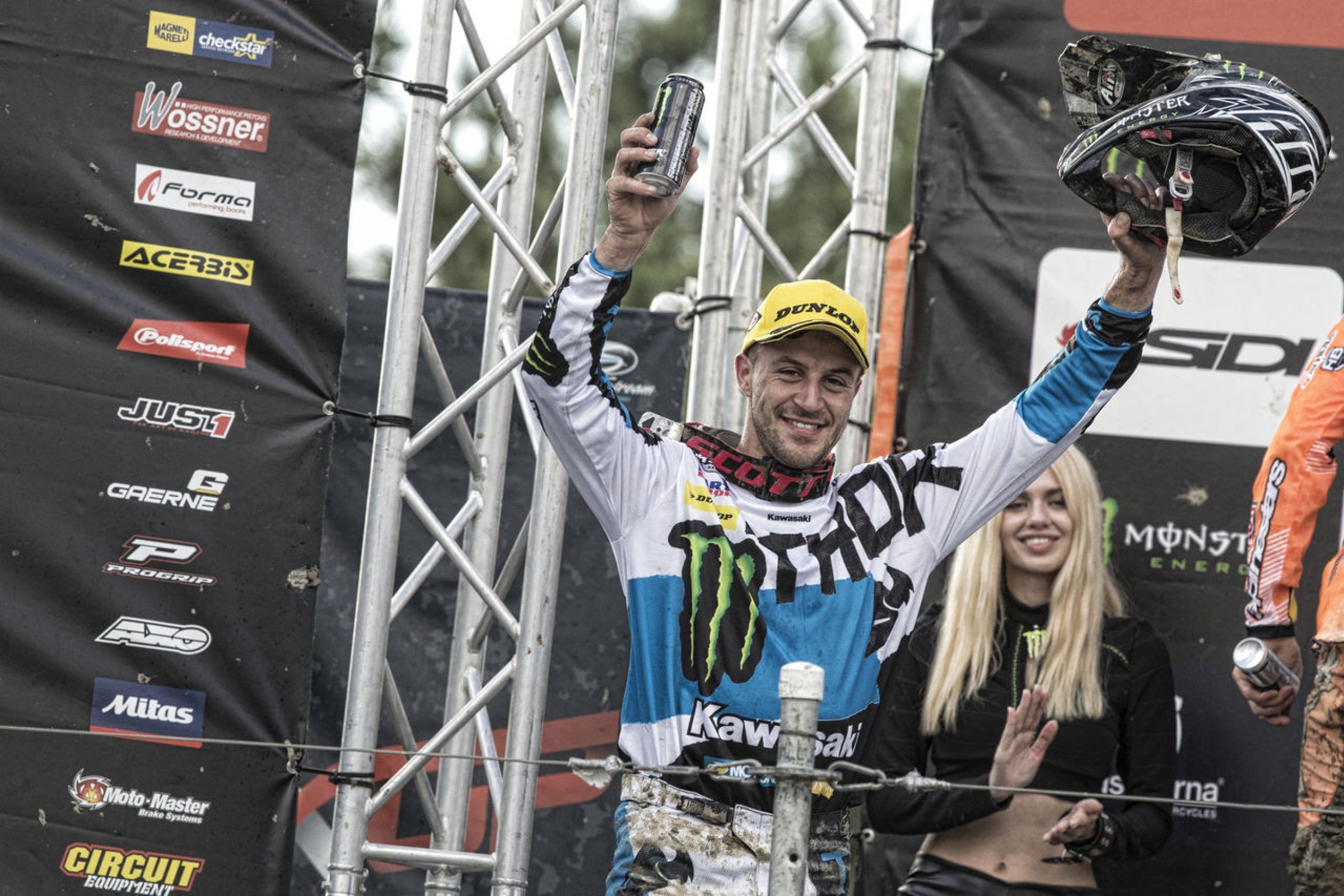 Monster Energy Kawasaki’s Clement Desalle displayed shrewd racecraft and management of appalling conditions in Russia to claim his second victory in a row and begin to show promising shoots of title form as the 2017 FIM Motocross World Championship tipped into the second half of the campaign.

For the second time this year adverse weather wrecked MXGP’s first visit to a new circuit. Orlyonok was battered by heavy rainfall and while the conditions were not quite to the boggy depths of the Indonesian fixture three months earlier this was a real mudder in terms of the quantity of water, mud, technical demands, and stress on the machinery and entire paddock to survive and collect results.

MXGP has travelled far and wide to new circuits where the facilities and scenes awaiting the series have produced surprises. Sometimes the discoveries have been eye-opening—the MXGP of Argentina a strong example—and also challenging. There was some trepidation about the long trek for the teams to Russia for the first time in half a decade after the impressive but ultimately very temporary jaunt to Semigorje in 2012. Orlyonok was not a complete mystery after hosting the 2016 FIM Junior World Championship last summer, but still represented a 2000 mile trip from western Europe and was a hop north from the town of Sochi and the Russian home of Formula One. Compared to the remote location of Semigorje, Orlyonok was a suitable and welcoming environment for an FIM World Championship fixture and the undulating and rutty (but fast) hard-pack drew a general thumbs-up from the MX2 and MXGP fraternity (EMX300 and 250 support classes also along for the ride) on Saturday.

Come Sunday and the tide had shifted. Starts were premium, goggle stops became prevalent and the onus was on the riders to remain upright and clean for the longest possible time.

“You have to be a good rider … but you also need a bit of luck,” said Rockstar Energy IceOne Husqvarna’s Gautier Paulin, who would come home in third place for the third meeting in a row and has the second highest haul of podium results this term with five trophies. Paulin went 5-3 and is currently vying with Desalle to be Red Bull KTM Antonio Cairoli’s closest foe in the standings: one point divides the old rivals and they stare at a 47 point gap to the Sicilian who was a cautious fifth through the Orlyonok ooze.

Desalle really shone in the second moto. The Belgian has profited from lively starts on the KX450F in what is just his second year in green after six with Suzuki and the package seems to be finally hitting some of the heights that #25 was frequently capable of in yellow. Desalle caught, stalked, and pounced on Monster Energy Yamaha’s Romain Febvre; the Frenchman leading a moto for the first time in 2017, which will help him regain some confidence after a hefty absence from the role of pacesetter. Febvre was sixth overall due to a top 10 finish in the first moto and will however be disappointed with his inability to avoid a slower and almost-lapped Jeffrey Herlings up the hill in the last minute of the second race that led to a crash and an invitation to his pursuer.

Aside from Desalle’s progress the most watchable part of the second race was the determination of Herlings. The Dutchman passed a conservative Cairoli to grasp the first moto, but three crashes in the opening minutes of the second left him floundering in the mud. Herlings cleaned himself down in the best possible way and set-off to see what position he could reach. By the checkered flag it was eighth—good enough for the second step of the podium and his third runner-up distinction of the year. Once more Herlings was the liveliest, most dramatic and unpredictable figure in the pack. With a 90-point deficit to his teammate—he sits fourth in the table—the 22-year-old reigning MX2 World Champion might not follow Romain Febvre and Tim Gajser as the third rookie to own MXGP, but he has already made an impact.

Gajser was missing for the second race in a row due to a broken shoulder and the official HRC line is that the world champion is hopeful of a return for round 11 in Italy and thus another two weeks to get into sufficient shape to steer the CRF450R. Also on the injury list now is Jeremy Van Horebeek. The Belgian’s weekend screeched to a premature halt on Saturday with a broken and dislocated finger on his right hand. Brandmate Shaun Simpson has missed the last three events recovering from a snapped metacarpal in the same hand, but the Scot is another aiming to resume action on Italian soil.

A worthy mention in MXGP for Rockstar Energy IceOne Husqvarna’s Max Anstie. The Brit grabbed fourth overall for his best result yet in a rookie term on the 450 and where his technical acumen in the conditions paid off. Expect Anstie to be one of the first names on the list for the UK when it comes to naming the Nations team (set for Matterley Basin in England on October 1).

The MX2 class was first into the melee Sunday and into a state that prompted Spaniard Jorge Prado to describe the track more like “water” than mud. Somehow Rockstar Energy Husqvarna’s Thomas Kjer Olsen and Team Suzuki’s Jeremy Seewer found the checkered flag first—the Swiss looking particularly inspiring in his (drier) second moto flight to lap all but second-place HSF Logistic KTM’s Brian Bogers, a feat not seen since Jeffrey Herlings’ amazing performance in the sand of Lierop in 2012.

After all the chaos, it was Red Bull KTM’s Pauls Jonass who triumphed with a 2-3 and maintained his 50 percent win ratio with his fifth success, permitting a gap of 45 points from Seewer as the Austrians massage a decent grip on the red plates of both categories. Bogers helped erase memories of an abject 2017 so far with his first podium appearance of the year and Sweden’s Alvin Östlund notched a personal best with fifth overall. Olsen, who crashed and DNFed the second moto is nevertheless third in the championship standings and continues to shine in his maiden Grand Prix contest.

Until the revitalised Grand Prix of USA in September, MXGP will operate in western European boundaries and a fortnight splits the return from Russia until the Italian stop of the schedule in Ottobiano sand for round 11.