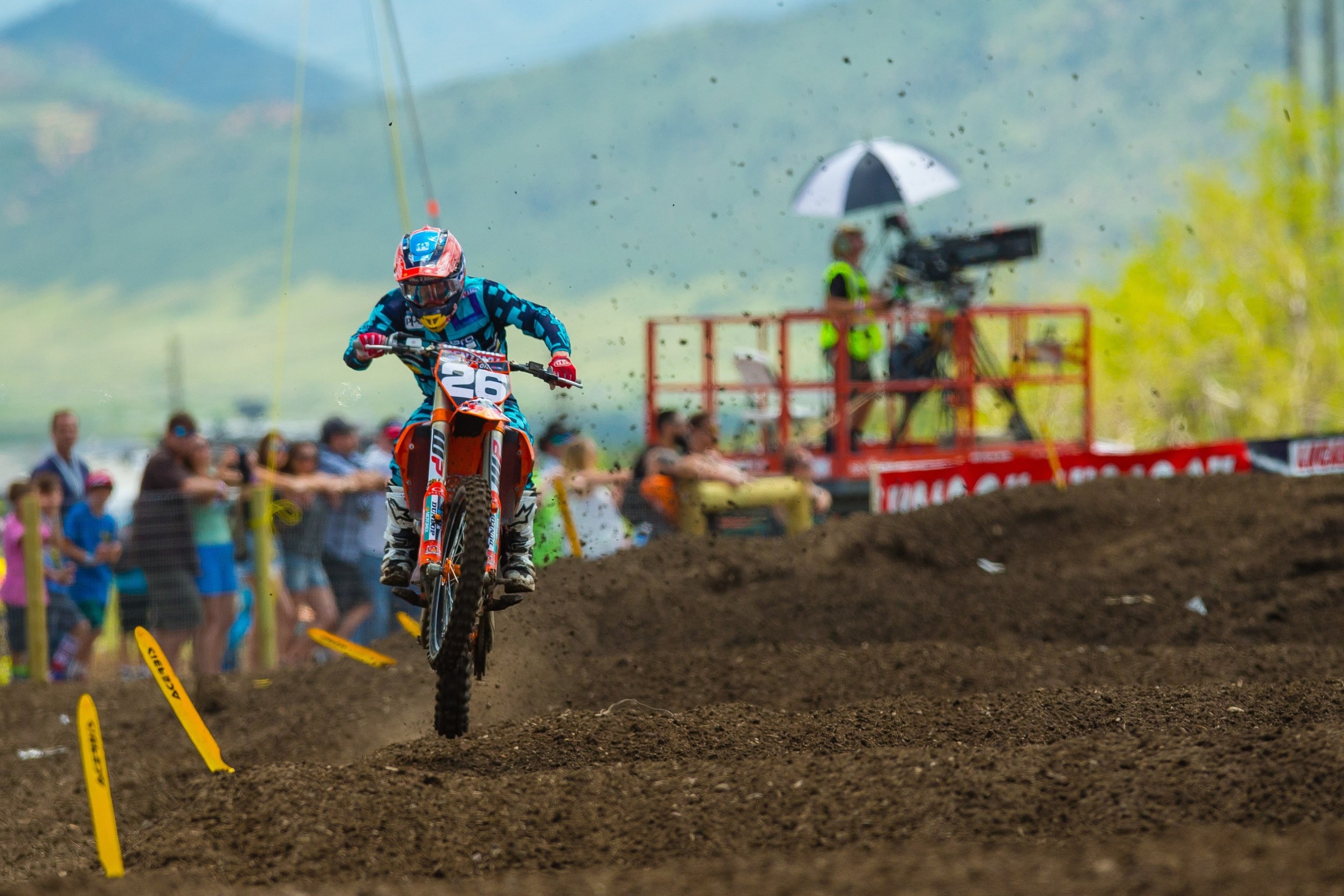 3 on 3 Questions from Thunder Valley

1.) What the hell got into Justin Bogle in the first moto?

David Pingree: I think Bogle finally had things go his way. He got off to a good start and moved into the lead early. Meanwhile, many of the riders we expected to be out front were on the ground. Marvin Musquin, Josh Grant, and Blake Baggett all piled up in turn one and Eli Tomac went down on his own later in the race. I don’t mean to belittle Bogle’s accomplishment, because you don’t win a 450 moto unless you have some serious juice under the hood, but he had some luck go his way. Hopefully he can keep building momentum and be up front more consistently.

Jason Thomas: Well, as I learned this week in Japan, he has been on a completely new program for about a month now. He moved down to Tallahassee and has been riding at Ricky Carmichael's property with Joey Savatgy. Who’s to say if this was the reason for his incredible improvement but it certainly seems likely. Sometimes big changes are needed to break out of a slump and it seemed like he found a few answers on Saturday.

Steve Matthes: I DON'T KNOW! It was an amazing ride for sure and considering he'd never won a 250MX moto before, I'd say it's one of the more unlikely moto wins we've seen since Matt Goerke took Southwick in 2009. I know Ping referenced guys falling in the first turn and yeah, they did, but Jason Anderson was right there and Bogle rode away from him with no problem. Happy for Justin and the RCH/Yoshimura Suzuki team. The only problem is now that we've seen it done, the "where should Bogle finish" expectations have been moved up.

2.) Is this Baggett deal for real?

Pingree: Yes. This really shouldn’t be a surprise. Baggett is a former 250 national champion and his speed outdoors has always been ridiculously good.

I’m a little confused by what I’m seeing out of Tomac. The last 2/3 of the supercross series left me thinking he was going to demolish the field outdoors, where he has historically been better. However, he hasn’t shown the raw speed I think we all expected to see from him. He has certainly had his share of bad luck already, but even in his good motos he doesn’t have the field covered easily like I expected. Time will tell if he finds another gear like he did indoors. Either way, Baggett seems to have found his mojo and if he keeps it up this could be very interesting.

Thomas: That type of performance isn't new to Blake. We haven't seen that level in a while, but he certainly has it inside him. Finding a way to harness that and unleash it every Saturday is what I am waiting to see. It's very difficult to find your peak performance level every single weekend so who knows if that will be something he can do week in and week out this summer. In any case, that was certainly a serious shot across the 450 class bow.

Matthes: Well, do you mean go from a first turn crash to third? And then run away with another moto? I'm not sure about that— there were times at Thunder Valley that the BB Gun was going two to three seconds faster than anyone else. It was an amazing ride and perhaps he recreates it down the line, but I wouldn't bet on it. Now, when you say is "it" real, meaning winning overalls and being a title threat then yes, absolutely. Baggett will fight for this thing the rest of the way and hopefully he does post these photos of him at Cold Stone Creamery on Friday nights that he was talking about.

Pingree: The 250 Class is always fun to watch but between blown up Monster Energy/Pro Circuit Kawasaki engines, crashes, and muddy spots on the track in the opening laps this thing is still anybody’s guess. There are 10 guys who are hungry, fast, and capable of winning and it might lead to the best summer of racing we’ve seen in a while. Grab some popcorn, folks, and make sure you can get MAVTV and NBC Sports Network (or the NBC Sports Gold app) at home because this is going to be fun to watch.

Thomas: I am not sure if most competitive is right, but it's certainly been the most entertaining. The unpredictability and chaotic nature of the 250 Class has been on display in all six motos. When the gate drops on a 250 moto, there is simply no way to know what we are going to get. Osborne dominated round one, then there was the return of J-Mart, and then Joey Savatgy bounced back huge with an overall win last Saturday. These guys have been all over the map and that's not even counting Alex Martin's moto win, Austin Forkner's roller coaster ride, Aaron Plessinger spectacularly throwing a win away, Adam Cianciarulo finally being caught by the DNF bug, etc. There are storylines all over this class. Awesome stuff.

Matthes: I don't know about the "most competitive" or whatever— 2006 was pretty epic with a bunch of nutty stuff and a lot of winners—BUT I will say, we've had five moto winners out of six so far and Osborne has two overalls and now Savatgy has one. We know Jeremy Martin's going to win one, right? Plessinger will get High Point and/or Indiana. Alex Martin's got to get one, he's too consistent not to. And I mean, look at Forkner, he's a lock. Dylan Ferrandis won a moto going away, he'll get another one. AC's been the best PC guy through six motos, he's got to score an overall win. That's eight guys total who, if they won, you'd just shrug your shoulders and go "yeah, I get that." This class is great and I hope we keep seeing what we've been seeing. Well, outside of the Pro Circuit bikes blowing up because the guy over there that runs it might kill somebody.