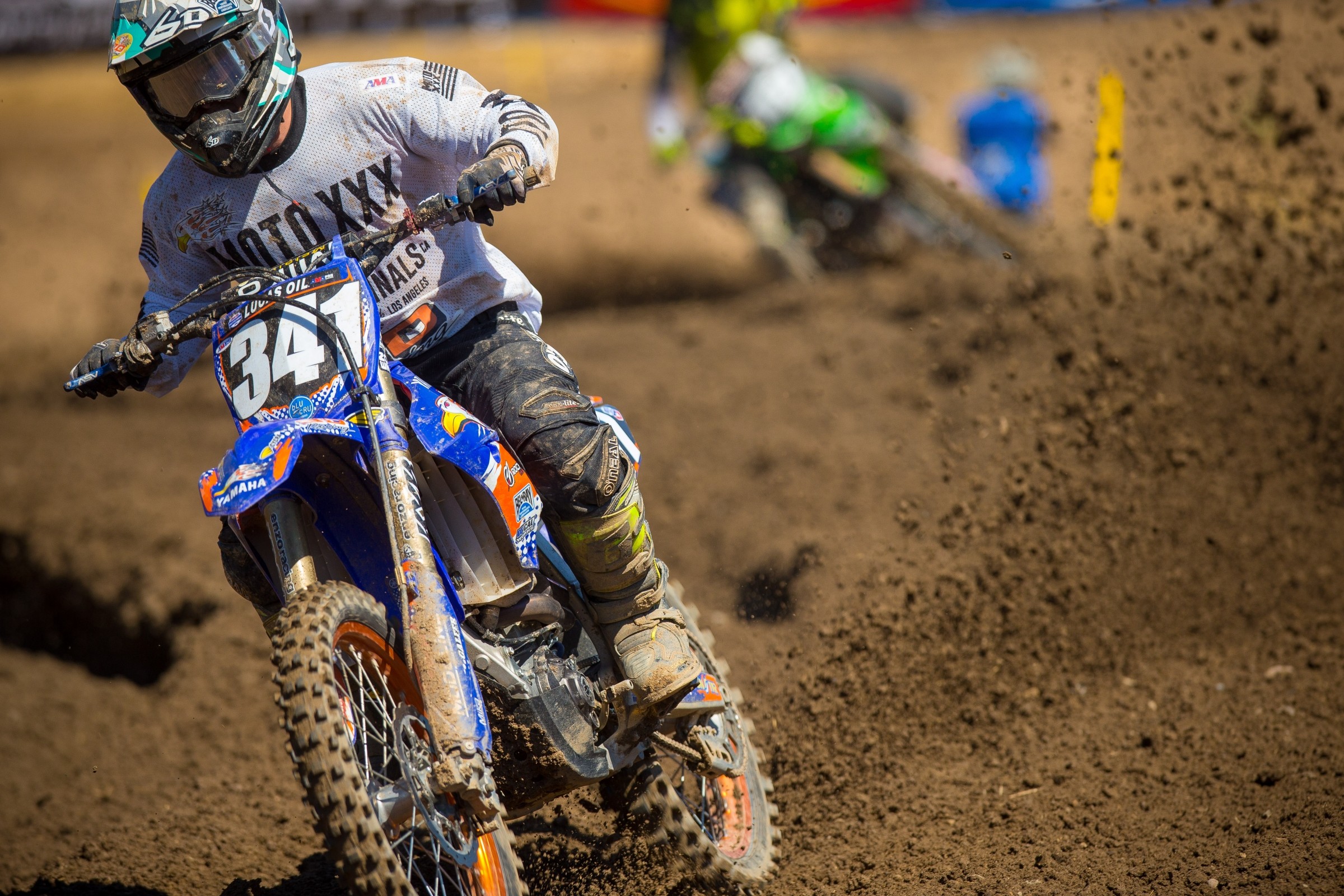 Bill Dill runs a small privateer team called 3D Racing. Competing in Monster Energy Supercross races in the East Region and all of the Lucas Oil Pro Motocross Championship, the 3D program has been around for 17 years. The team’s huge blue hauler is a fixture in the privateer section of the pits and features a distinctive eagle on the side that serves as the team logo.

Over the years, the 3D program has supported many top level privateers, including Jason Thomas, Kelly Smith, and Tiger Lacey, as well as plenty of aspiring three digit New England racers who were looking to make it big.

The team enjoys some modest sponsorship from Yamaha, but it is mostly funded out of Dill’s pocket. Dill is based in southeastern Massachusetts, and when he’s not driving around the country going to races, he is back home working at his upholstery business. The 3D program might not have the funding and wins of some of the larger factory supported efforts, but it does have some serious longevity and experience, as well as an abundance of passion for the sport.

At the 2017 running of the Hangtown Motocross Classic, Dill and his team had the #341 Yamaha of Nico Izzi under the tent. Over the years, Izzi has been a controversial rider who has dealt with some personal demons, but he’s back again and trying to get his professional racing career in order. We sat down with Bill to talk a little bit about his program and his latest hire.

[Ed Note: This interview was conducted last week before the Hangtown National.]

Racer X: How many seasons have you been doing the Nationals, and tell me a little bit about your team?
Bill Dill: This will be the 17th year that we’ve been running a team doing all the Nationals. I started in 2000 and we’ve been going ever since. It was done originally with sponsorship from EZ Wider [Rolling Papers] for the first year or two, but I’ve been doing it on my own ever since then. It’s not easy and I do everything from driving the truck to working on the bikes, and whatever falls in between.

You have the support of Yamaha and some other sponsors, but I am guessing it doesn’t cover all the expenses?
Yeah, I own a family upholstery business that pays for most of it. We do have some good and longtime sponsors—Moduline Cabinets, Pivot Works, Mika Metals, some of my friends like the Tassinari brothers from Moto Tassinari. Former New England racer John Finkeldey helps me out a little. Decal Works helps us with a lot of stuff, as does Sunstar Sprockets, Bel-Ray, Cycra Plastics, VP Racing Fuels, Dunlop tires, and Rocket Exhaust.

Tell me a little about your personal history in the sport?
I’m a lifelong motocross racer, and back in the day I raced locally in New England doing the normal NESC stuff in the expert class. Back then it was really competitive and we had full gates all the time. I’ve qualified for a few nationals and actually scored some points, which allowed me to earn #93 as a national number.

You’re working with Nico Izzi now. Talk to me a little bit about that and how that came to be and what’s going on with him?
Nico called me about eight months ago to see if I’d help him out with supercross. I wanted to make sure he was doing well in life, that he was good and clean and he was doing all the right things—which he was. We started riding supercross and wanted to get ready for Atlanta. He got into a little bit of trouble on his own property with something that has nothing to do with the issues that he had in the past. He got arrested, so he didn’t finish the supercross series. I waited to see what was going on, and got him out of jail. Since then, he has been living at my house and training extremely hard. Honestly, I know it sounds cliché, but he’s doing all the right things and really trying hard to make it work.  This sport isn’t easy and you can’t fake the training without it showing. Trust me, I have seen it all over the years. So, I’m around Nico all the time and I know what he is doing each and every day, and can tell you he is busting his butt.

What are you expectations for results this weekend [Hangtown], and how do you think things are going to go this season?
This weekend and for the next couple weekends we’re hoping for the top 20, maybe the 15, somewhere around there. We honestly just need to finish the first two motos and get back out there. Later in the series, it would be nice to see some top 10s, but lets see how it goes. Right now we’re working on racing back into shape. He’s doing a lot of work during the week, trying to get a lot of motos in. We’re up to our half-hour motos a couple times, three times a day. The goal is to get to four, 40-minute motos a day in the next couple of weeks. Then we’ll be ready for hopefully the top 10.

Tell me a little bit about what your weekly program looks like with Nico?
We go riding three to four days out of the week. He runs six to nine miles twice a day and goes to the gym. He’s usually up about 6:30 or 7:00 in the morning and working out, or getting ready to ride. By 9:00 he’s in bed. It’s pretty much the same routine day after day. So everything’s going good, and we have some good structure and routine down.

Are you guys traveling together this summer as a team? You’ve got your hauler and you’ll just be based out of the truck?
Yes. We’ll go back and forth to my house in Massachusetts, but we’ll be traveling together, working together, going to the gym together, and riding. I keep a good eye on him so he can’t do anything wrong. It’s not that he would, but we’ve just got to keep everything as tight as we can. We actually get along really well, and I want to see what we can do.

Getting ready for the first round of motocross here at hangtown! Nico izzi back in action, thanks to all our sponsors who help make this opportunity possible for us! #motocross #hangtownmx #yamaha #3dracing #nicoizzi #341

Tell me about some of the other riders you’ve had. You’ve had a range of riders over the years, and I think your best finish was a podium at Southwick one year?
Yes, we had Keith Johnson back in the beginning in 2001. He got on the podium twice on our bike, which was something really special for us. Keith was for sure a top privateer guy back then. We had Tiger Lacey that had seven holeshot awards as well, that was cool as it showed how fast our bikes were. Jason Thomas was another great rider that we had. He was really consistent and was a top privateer rider. We had Jason Brooks that got the rider appreciation stuff—the FMF award. This past supercross season we had Gradie Featherstone from the UK that actually did pretty well for us, too. We did the East Coast this year. We didn’t set the world on fire but our results were consistent.