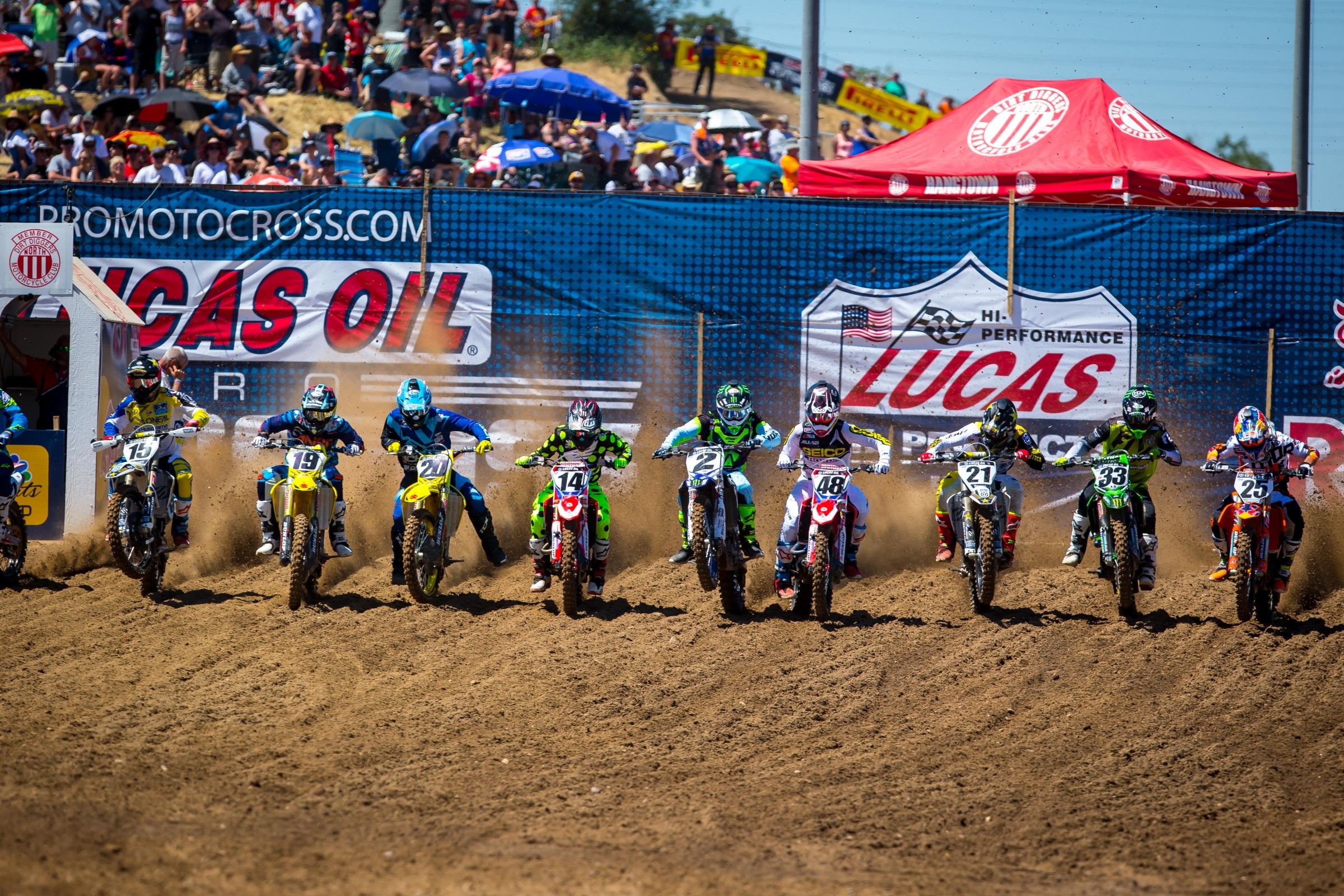 Racer X: Your second moto was great, you have to be stoked on that, but honestly your first moto was good too, you were down early. I don’t know which one was better—you had a great day.
Wilson: I’m really happy. Obviously the fall first moto was unfortunate, I didn’t have a great start and I was back in the pack, and Jason [Anderson] got hit with a rock in his goggles and had blood in his eyes, and he went to pull off the track … no one’s fault, but I ran into him and crashed. So I did my best and fought through, but man I spent a lot of energy. I tried to recover the best I could, tried to hydrate, but I knew it was hot and rough so I knew a lot of people would be struggling, too. Yeah, I came from 11th. I had good lines, I stuck with them, and made some passes. It was good to know I could still do it! It’s been awesome, I haven’t been here in three or four years. It was cool, but man, it was so gnarly out there.

Where you marking [Justin] Barcia ahead of you? Did you know you needed the pass for the overall?
I wasn’t keeping track of any points or anything like that. I had him in my sights and I just kept closing in on him. I would pull the trigger and pass him, but when you pass him, he goes for it behind you for a couple of laps. But I know what it’s like behind him getting roosted every lap. So I passed him and then I saw JG [Josh Grant] there a bit on the last few laps, but then it was done.

This track has to be brutal to start with.
It’s super gnarly. Honestly going down that hill, the speed we were going down it was embarrassing! I’m like, “Surely people are hitting this faster!” But everyone behind them was going the same speed. If you pushed the boundaries and made a mistake, it wasn’t worth the risk. I felt really good in the rollers, that’s where I was passing a lot of people. They were really rutty and I was using my legs and wheeling through them.

How was your bike? How has testing been?
On press day, I thought my bike was maybe a little too stiff, but that was maybe because it had a new frame. So I didn’t go too crazy with changes, just softened up the suspension a little bit. I’m not one that changes a lot of stuff on the bike generally. I know if I ride the bike properly it’s going to work the way it should. It’s just about being calm, because when I ride super strung out I just get pumped up. I’m really happy I was able to avoid that.

Racer X: I know you haven’t had a ton of time [to recover], you’ve been battling this injury. You have to be stoked on that first moto?
Seely: Yeah this week, Monday, was really the first day I’ve done a moto. So I really only had Monday and Tuesday under my belt, and I came here for press on Thursday. I knew I would have to race my way into shape. I know that phrase gets thrown around a lot, but I’m really learning this year what it means to race myself into shape! I had a huge crash in the second practice….

Yeah someone said you weren’t racing, even, that’s how big it was.
It was pretty bad. They over watered the track all day, and I just tucked the front. Had no idea it was going to happen. Ended up cartwheeling and landing right on my right hip. The left thigh is what’s been bothering me, so now I’ve got my left thigh and my right hip, so everything is kind of tightened up. It’s weird, everything is like extended right now, so when I sit in a chair, my right knee sticks out further than my left knee. So it freaked me out, I went over to Alpinestars [Mobile Medical Center] to get an X-ray, then Doc G worked on me, stretched me out, got me as limber as I could be. I just went out there like “Man if I could salvage a top 10 right now I’d be stoked.” I found myself top five after a little while and then I passed Coop [Cooper Webb] for fourth, and I really had my sights set on second and third the whole moto. So I was really happy with the way I rode.

Second moto it caught up to you?
Oh yeah! Like second lap … I got a pretty bad start, I hit a hole coming out of the gate, and it unhooked my starting device. I still rode decent for five or six laps, but by the second lap, I was like “Man, this thing is just biting me in the ass right now.”

It’s actually pretty amazing that you did that well in the first moto!
[Laughs] Yeah and if you look at the track right now, it’s just absolutely insane that we can make it around right now. It’s almost like there are cheater lines off the side because there are no more good lines, there’s no more room for good lines. Everywhere you go you’re just dragging fork legs, dragging foot pegs, dragging feet, whatever.

Osborne: It was a good day. I can’t even explain it. Last year I went 20-4 here. My goal here was to be top five, but I really wanted one of those trophies, so podium would be a bonus.

There’s no chance your goal was top five.
I swear. Before the day Dave [Feeney, mechanic] said top five and we’d be having a good day. And I was like “You’re right, we will be.” To go out, get poll in both sessions and win both motos, I can’t even really explain it.

How was the track? Second moto looked really rough.
It was brutal. This is always one of the gnarliest of the year. I decided to do no testing testing before hand, because I knew my bike last year was really good. I feel like that was really good because I know that bike well, I’m comfortable and and I’m familiar with everything that it does. I was happy with my settings and I wasn’t searching for anything to do.

No testing.
I swear. Not a day.

That’s bold, I like it. Maybe some of these other riders should do that.
I just knew that I was comfortable with what I had. I’ve always missed it here, and the guys gave me something good so why should I change it.

First moto you were behind Adam [Cianciarulo] for a long time what was your strategy there?
He was going fast, and there were a couple of times I got close to him, but I was just trying to find how I felt, you know? I had some arm pump in the middle of the moto, just first race tightness, whatever. Then once I got the halfway flag I decided to drop the hammer, I made up some time on him, he made a bobble and I was able to go down the inside on him.

I feel like you’re a guy that’s an East Coast dude, and you just try to get through Hangtown and Glen Helen and just take it from here.
I’ve just always kind of struggled here. Last year I went 8-8 at Glen Helen and I felt like I rode pretty good. It’s just one of those deals—when it’s clicking it’s clicking.

You know what I mean? Some guys are just like “I just want to survive California.”
I’m one of those guys, it just didn’t look that way today. I just hope they don’t do anything silly and build a bunch of dumb jumps next weekend. Glen Helen gets so rough, it would be hard without a single jump.

Racer X: A good day for both guys, good second motos, and I think [Broc] Tickle surprised a little bit because we thought he was still behind the eight-ball.
Bentley: Tickle’s hand is still bothering him a little bit, so we weren’t 100 percent on how he would do this weekend. Pretty happy with the result there. I thought he rode okay—not great—stuff we can improve on, sprinting and taking advantage of a good start early so you can get some space and some time on the other guys.

Justin [Bogle] rode good. Struggled a little bit in the off-season getting a setup, chassis wise for him, but I think we have a good setting now. Two top 10s for him, just basically wanted him to go out there put in a solid result, get a base and something to build off of.

This race was hot, rough as hell, a real test.
Yeah it was definitely difficult today. They’ve been in 72-degree domed stadiums for the last few months. Glen Helen is supposed to be cooler. We got lucky a little bit with a breeze in the second moto and that cooled it off a bit.