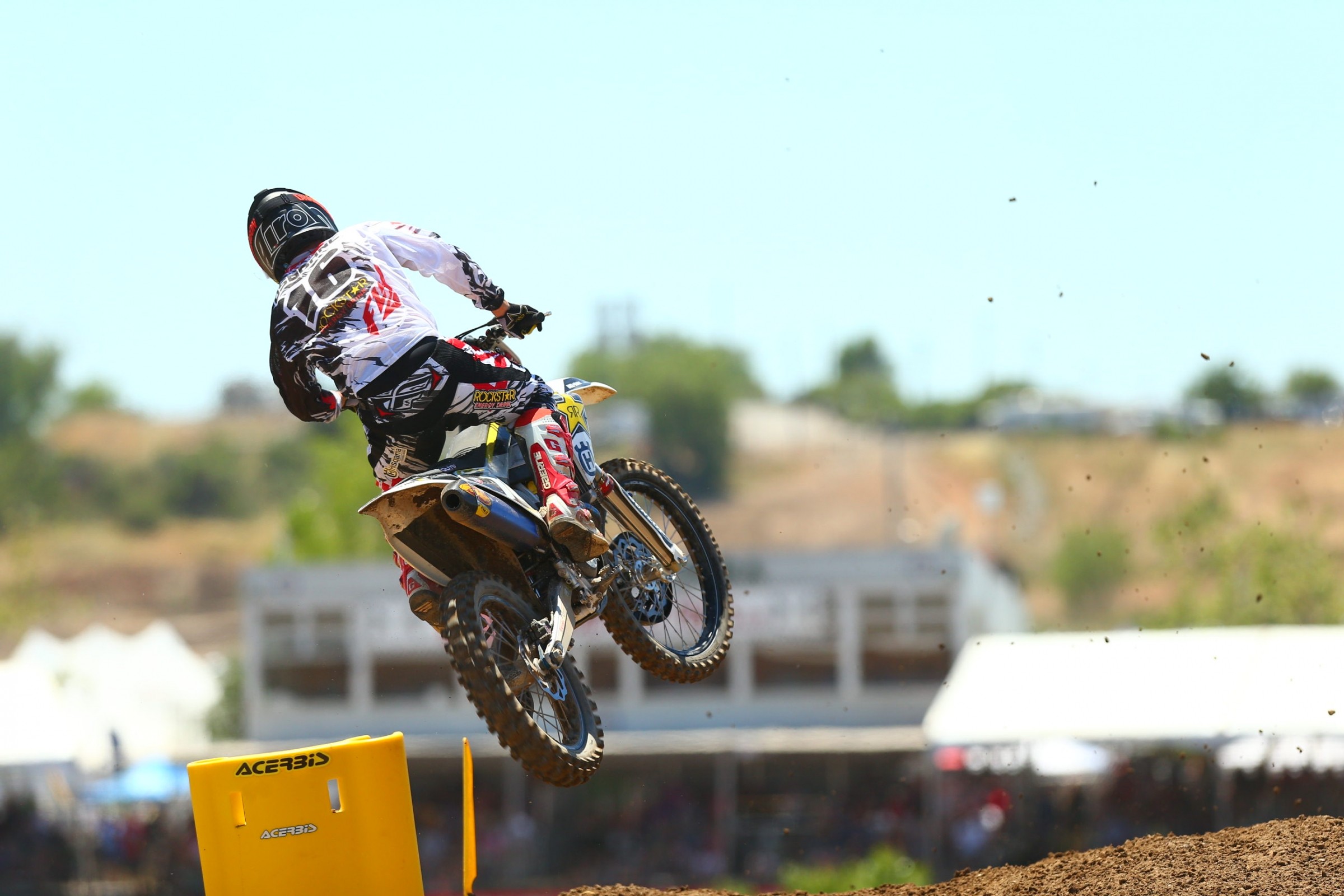 The first round of the Lucas Oil Pro Motocross Championship is in the books for the 250 Class, and Zach Osborne picked up right where he left off in Monster Energy Supercross. The 250SX East Region Champion went 1-1 on the day and claimed the first overall of the season.

Alex Martin finished in second place with 4-4 finishes and put some pressure on Osborne during the first moto before slipping back to fourth.

Plessinger rounded out the podium with 3-5 scores which ties him in points with Martin. Both sit 14 points behind Osborne after one round.

Zach Osborne: I feel like this is one of the gnarlier tracks of the whole year. It’s definitely one of the toughest ones that we have. You come in kind of guessing with settings and where your body is and everything. It’s nice to come out and just be in the hunt right off the bat.

Racer X: Not only in the hunt, but looking at this race and seeing that negative 14-point gap over the next competitor. Is that something you even imagined coming out here?
Osborne: No. My goal today was kind of to be in top five and if I could get on the podium that would have been really good.

Alex, new team, new colors this year. Going 4-4 for second overall. Not how you want to take second place, but looking at the big picture, it’s good to get on the podium.
Alex Martin: For sure. There was a lot of unknowns coming in to this weekend. Just being on a new team, new bike. It feels really good to get a podium on the KTM right away. Definitely obviously it was a little bit rough with the injuries that I had in supercross but I was able to get in a pretty solid block of training. I knew that I wasn’t that far off, if not the same as last year coming in. It was basically just you got to get off the gate because it’s such a competitive class.

It was kind of a hotter Hangtown than what we’ve had in the last few years. Do you think that got to you out there today?
Martin: Yeah, I think it got to everyone. I’ve never seen a Hangtown with that many ruts. Especially last year. It was like a highway. Fifty degrees and really smooth. It was brutal for sure. There was lines out there that you were just winging it. You were just trying stuff and so many options and so many things to do. And then you throw in the heat it could be 90 plus degrees. You had to put it all on the line. It was a good chance to see kind of how everyone stacks up and who’s strong and who’s not.

Aaron, good start to the season. I don’t think we’ve seen you on the box at the first round yet, so you’ve got be excited to be in a good points position at the beginning of the season.
Aaron Plessinger: Definitely my starts were better. I got a fourth place start in the first one, and I think a fifth place start in the second one. Improving on my starts. It was a good race. Alex just edged me out. I’m happy with the way I was riding and I’m happy with my fitness and happy with everything. Ready to get on to Glen Helen and show them what I can do there.

It looked like that first moto it seemed at one point in time you had the speed to kind of get up there and match Zach and then it kind of went away. Was that something you lost some comfort? Did some of the lines go away that you were taking? What happened there?
Plessinger: Definitely. I started messing up. I started catching him and then once I caught him I started messing up and ruining my flow. Once I did that I kind of sat back for a minute just getting back into it. Just trying to flow and trying to find those good lines. But it’s definitely not easy coming from Southern California when it’s 60 degrees on Monday and then 90 degrees here today. It was hot and it was rough, but I did pretty good.

Alex, just take me through the last couple laps of that second moto. You were battling Forkner. You were battling your brother. What was that like?
Martin: I got a lot better start in the second moto and was in second pretty soon. I saw Zach up front and I put in the charge trying to bridge that gap. I’m sure he looked over and saw me coming and tried to do the same. Took a lot of energy out of me. So then I settled in because I really didn’t make any progress. I settled in and just tried to find some good lines and just try and cruise for the next 30 minutes. Then unfortunately Forkner came up there towards the end of the moto. I’m like, man, only got three laps left? He was putting some serious heat on me. I knew that they weren’t really there for the overall, because he was ninth or 10th first moto and then Jeremy had a DNF. So I knew it wasn’t going to push me off the podium if I let him by. He was really going for it. I could hear him revving back there. It kind of just was like, if you want it that bad don’t take me out right now first round. He had some really great lines, and I could kind of feel he was catching up to me. So I let him go. He almost got up to Zach. He was on a mission, for sure.

Zach, last year obviously your results were not good here. Was that just more bad luck or was it actually this track is not necessarily your best? Or was it just other stuff that messed you up last year?
Osborne: Last year was completely flat. I think they were expecting rain or something. I don’t really remember. I just don’t excel when it’s flat and wide open. I’m better when it’s like this. So, that was a big issue for me. I was terrible in the first moto and just flat out didn’t ride very good.

Got a two-parter for each of you guys. What was the biggest surprise on the weekend for each, and what are you going to work on this week?
Osborne: Surprise, I don’t know if there was any real surprise for me. It was a little bit rougher than I anticipated. I always feel like this is one of the rougher ones of the year, but it was even more gnarly. This week I’m just going to continue with the same program that I’m on. Just try to continue building and no mistakes. I just have to stay in this thing. It’s a long summer.

Martin: Track-wise I knew with the hot weather that they were going to soak it, just from my experience at Millville. My dad would always just soak the track when it was hot. I knew they were going to soak it. Even on press day it was really soft, so I figured it’d be rutted. I was really kind of surprised how rutted the track was right away from the first moto. Riders-wise, I think everyone kind of was in their place that I kind of thought. There wasn’t really any surprises on the competition side. This week for me mentally it’s good for me to be second overall coming out of this. That’s a bit of a confidence boost for me coming back. So for me I’m just going to kind of do my training and show up basically ready to send it at Glen Helen.

Plessinger: The biggest surprise for me was how rough the track got. It was pretty gnarly. Rutted up and it made for some really good racing. I just need to get used to the heat. Go back and do my motos, do my training and come back for Glen Helen ready to go.

Zach, we all know what happened in Vegas and then you were battling with Savatgy a little bit. Just have to wonder if that enters your mind at all when you find him on the track?
Osborne: It did. I just need to go around and ride my race.]. I’m glad that he raced me clean. I appreciate it.