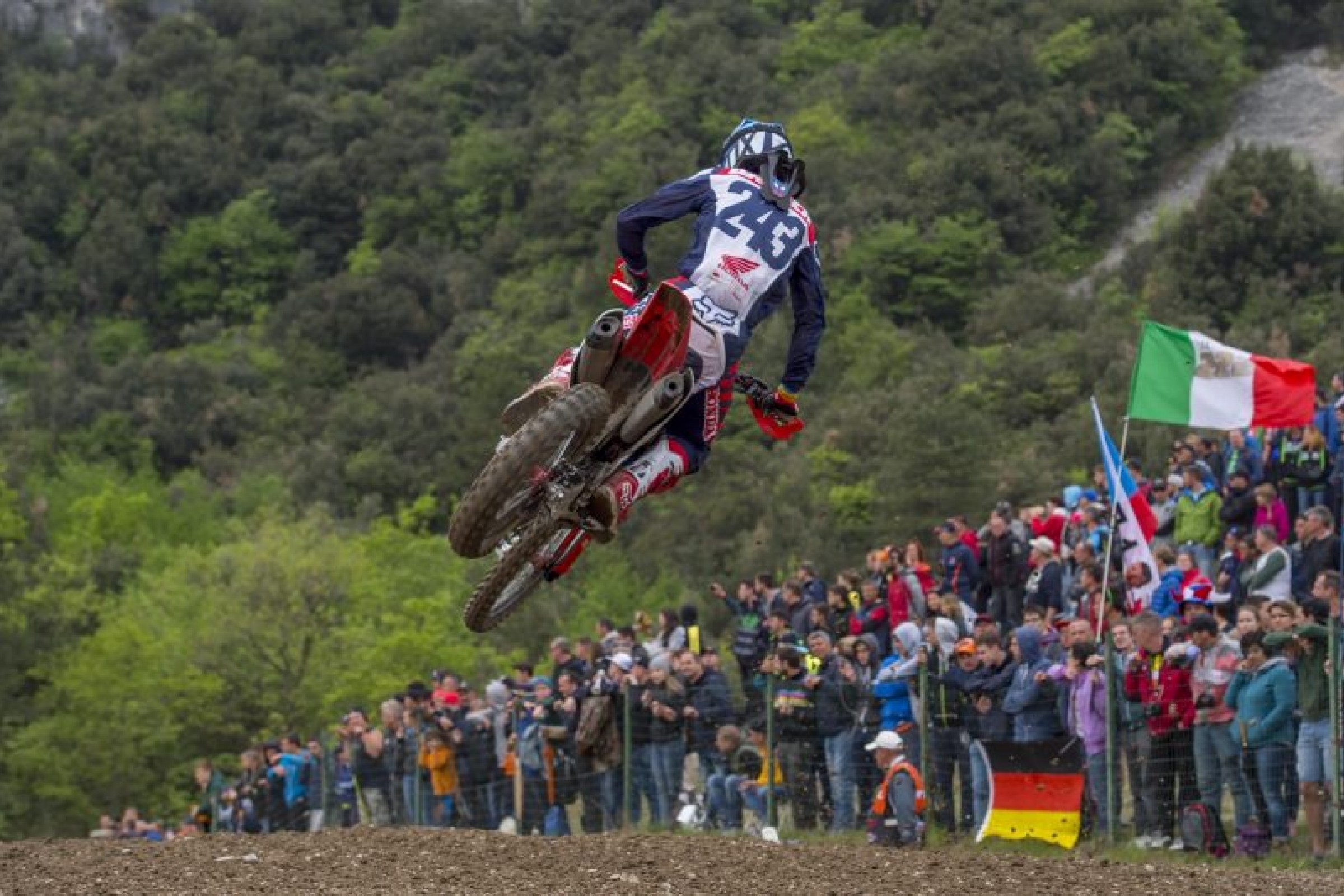 Since he initially expressed interest in racing in the U.S., talk has swirled around when we may actually see defending world champion Tim Gajser compete full-time in the States. He was scheduled to race the Monster Energy Cup last year, but had to pull out due to an injury.

Following the MXGP of Latvia last weekend, Lewis Phillips of MX Vice caught up with Honda HRC general manager Roger Harvey to talk about Gajser’s crash in the second moto, his run-in with Jose Butron in the first moto, when he may be coming to the U.S., as well as the team’s second rider Evgeny Bobryshev, silly season and more.

[This article originally ran on MX Vice and has been republished here with permission from the author.]

Racer X: It was obviously a rough weekend, but the podium that [Evgeny] Bobryshev had is a bright light in all of this.
Roger Harvey: That is the nice part of the Grand Prix, to see Bobby on the podium. It is good to see him, you know, he is more consistent these days and he is working hard, as he always has worked hard. To get him on the box, it is just great. I love it for Bobby. That is the great part of it, then the sh*t part of it is obviously the crash from Tim. Huge crash.

Obviously the day started rough for him with that incident in the first moto. He tried to approach [Jose] Butron after the race, but I saw that you tried to usher him away. What did you think of that incident and then what happened after the race?
I like the way you term it as an approach to Butron. I think he was about to pull his head off! In actual fact, I was watching over the other side of the track and somebody showed me the incident. I thought I better get back to where they come off the track, because he could be approaching him! As much as I tried to stop him, there was going to be no stopping him.

Anyway, we got him away. He said his piece to Butron. I do not mind a bit of hard riding. This is our sport! We do knock each other about a little bit. We just give each other a shove and this, that and the other. When you get front tire marks on the back of your thigh and you have got great big wheels that are red, raw sore from a front tire, somebody has not quite done it right.

Do you think that maybe contributed to his second moto crash? Maybe he was sore and compensating?
Yeah, he was sore. But, to be honest, Tim is very old school. He does take a bit of pain. He is really good with pain, so I do not think it contributed to it. He was sore and after he did it in the first race it was like six laps before he could use the leg again. It was an unbelievable dead leg and he was riding around for six laps on one leg. You could see he was doubled up, going like this. He was hurting.

I don’t think that it contributed to the second crash at all. I think that was just like the boys are traveling. They are traveling fast, so it was just a mistake. He got a kicker in the first part of the wave section, dropped the front wheel in the next one and cartwheeled into the third one.

Before we move onto the other guys, there have been a few rumors recently that Tim has already decided that he’s not going to America next year. Is there anything that you can confirm or anything that is going on behind the scenes?
I usually go to speak to the [MX] Vice guys on that and they tell me what is going on! At the moment, I do not think [so] to be honest. I think Tim is quite targeted at MXGP. I will not say no 100 percent, but that is where his future will probably lie. But we always talk with Tim every year so, in other words, you are not going to find out just yet.

When you say you think this is where his future is going to lie, are you talking short-term or long-term?
It depends. What do you term as long term? What do you term as short term? Maybe two years here and something like that. He could be here for two or three years. He could look at America or he could look at America before then, as it has always been with Tim. I think he won the championship and surprised everybody.

Now he is in the defense of the championship, which as you generally find is always harder. Harder to defend your championship than it is to win it. I think when you win it, it is a surprise. Now he is defending it and he has just had the hard whack today, so I think he wants to just prove to everybody that the one-off on the MXGP bike was no fluke.

People are saying that Tim’s decision to go to America is going to revolve around what [Ken] Roczen does next year, whether he is back for Anaheim 1 and back to his best. Does that come into it at all? Tim is obviously his own person and can make his own decisions.
Tim would tell us what he wants to do. He would tell us his plan; then we would discuss how that can happen and what the possibilities are. But, as you can imagine, it is not an easy thing, because America is totally different. It is not all run by the same organization as we run. We are responsible for MXGP and the U.S. guys are responsible for the U.S. racing. We cannot just say, “We are sending you a rider." It doesn’t happen quite like that, but the options are always open.

With Bobby, he may be closer to a win than we have seen in recent years. Then toward the end of the race it seems like he is dropping off more than we have seen in recent years. Do you think that is in his head a little bit? Maybe he needs that one win to carry him forward and move past the mental block?
Basically you’ll be talking about Valkenswaard. He hit a wall there unbelievably with three or four laps to go. Anyway, we had him tested. We have not said anything this weekend, but we had him tested in the week and the bloods were a mile out. We think that was from the travelling. We think from the beginning of the season when you are doing so much traveling. Bear in mind that Bobby also went to America and Japan after the four overseas races. It was probably too much.

This is what caused the issues, so the bloods are coming back and we saw today that he weathered the pressure a little bit better right at the end of the race when they were hitting him with seven or 10 minutes to go. He weathered that through. Hopefully that is what the problem was. It was because it is so much traveling and if you go around the paddock here it has taken its toll on a lot of the guys.

I know you have branded the MX2 team a bit of an experiment, as you want to evolve with the guys. How do you sort of feel about how that program has been going?
Yeah, it is for the objective of the MX2. That is working okay. Results have got to be better. Not happy with them at all. Obviously with [Chihiro] Notsuka getting injured that sort of changed things a little bit, so that is what has got to improve. They have got to improve the starts, which will automatically improve the results. That’s where we are at with it. From what we need from it as HRC, it is working okay. It is just not the results that we are after.

Has silly season already started for you guys behind the scenes, especially with the MX2 team? I am guessing you get a lot of young guys now, who are interested in joining the HRC family?
To be honest silly season started about a month and a half or two months ago, so yeah. In fact, silly season actually started in 2016.

What were you talking about in 2016 then?
What we were talking about I am not going to tell you, but that is the way it was. It is unbelievable how it is coming more and more forward about what you do. It started some months ago.