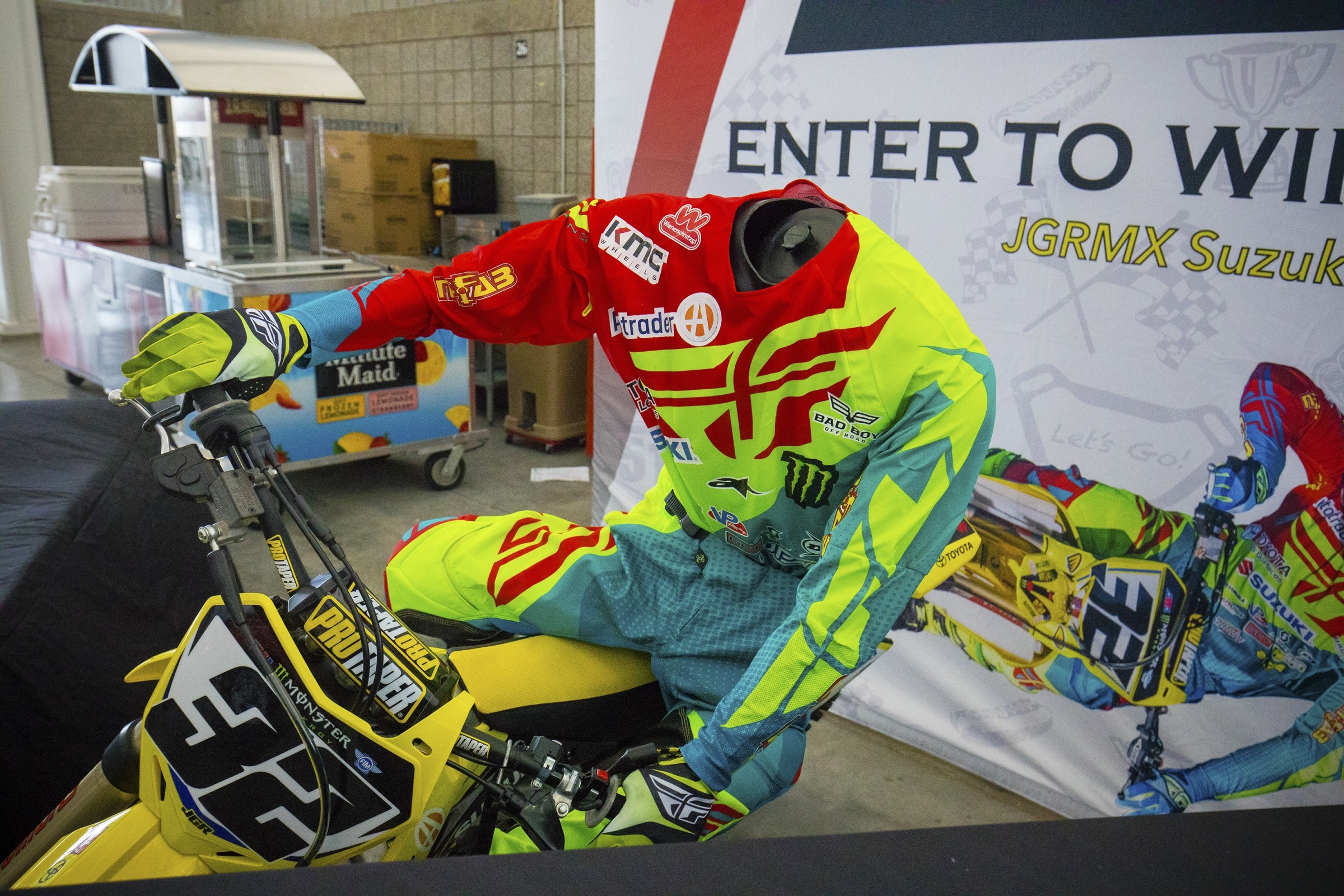 Madison Bumgarner is a pitcher for the MLB’s San Francisco Giants. He’s probably one of the best pitchers in baseball. He also likes to ride dirt bikes. And, as is the case with anyone that rides, there’s a good chance of getting hurt. Bumgarner, who has been part of three World Series championships and is a four-time N.L. All-Star, recently sustained bruised ribs and a grade one or two left shoulder AC sprain in a dirt bike crash and will miss six-to-eight weeks. It's worth noting that Bumgarner's distinguished baseball career has made him the pride of Hickory, North Carolina, where he is from, and also happens to be the mecca of GNCC racing, as most of the top woods riders live there, akin to Corona, California, or Clermont, Florida, on the motocross side.

We doubt San Francisco Giants fans care about any of that. Fans of stick and ball sports have a tendency to get upset when their star players are injured doing other activities—like riding dirt bikes. What made them even more pissed off, is that this commercial from Ford, showing Bumgarner riding, was still playing during Giants’ telecasts in the Bay Area after his injury, according to Yahoo! Sports. #dirtbikesforpresident

If you follow the motocross industry closely, you’ve probably heard the name Chris Denison. He worked at Transworld Motocross before spending 11 years at Dirt Rider, the last five as editor-in-chief. Denison was also a freestyle rider prior to getting into media. Needless to say, he’s done some cool things. Denison is no longer with Dirt Rider, but he’s still doing some pretty cool stuff—working as a stuntman in Hollywood. Dirt Buzz recently talked with Denison about going from freestyle to media to stunt work.

As odd as the career arch from ramp rat to journalist was for me, going from a full-time magazine editor to a full-time stunt guy is probably even more unlikely. A good way to describe it is that if freestyle is a job where I used my body to make a living and Dirt Rider is a job where I used my brain, being a stuntman is an even split of both—it requires a high level of athleticism combined with insane amounts of problem solving, calculation, and risk management. I absolutely love the challenge of it, as well as the variety that it provides. That said, there are definitely some moments that test you down to your very core—I’m fond of saying that everyone wants to be a stuntman until it’s time to do stuntman stuff!

We Have Our Save of the Year

While we still have a little over eight months left in the 2017 calendar year, it doesn’t matter—we have our save of the year. Yep, it’s over. No need to continue to try and pull off the theatrical save. Loris Baz locked this thing up at Circuit of the Americas last weekend in Austin during qualifying in MotoGP.

Could be the greatest save of all time... @lorisbaz pic.twitter.com/dMxMlGVzQx

Honorable Mention for Save of the Year

Anointing Baz with Save of the Year so early was no easy decision. Nope. Just last weekend we had two saves that without Baz could have been nominated. Alas, Baz happened and there is no turning back. Still, I wanted to shine light on these amazing saves.

First, check out this save from Moto3 rider Nakarin Atiratphuvapat at COTA last weekend.

This save during qualifying at the MXGP of Europe by Julien Lieber was amazing.

What a save by Julien Lieber. pic.twitter.com/gLfPQOUIgZ

That’s the headline to Indonesiaexpat.com story regarding improvements to an existing motocross track in hopes of improving tourism to the island located in West Nusa Tenggara province, Indonesia. Per the report, Lombok attracted 2.2 million visitors in 2015 and the number has increased to more than 3 million visitors in 2016. They hope to increase that even more by revamping the motocross track located near the airport. Interesting.

The photo provided doesn't exactly look like motocross to us, but maybe there would be a moto track mixed in with what looks like a road circuit?

[Update: A reader below says the photo is actually of the Chang International Circuit in Thailand. Which makes more sense.]

The motocross circuit project has been in the pipeline for six months already, and is slated to be carried out by a state-owned company and the local government. The construction of the track – which will be 1,200 metres long and 810 metres wide – will be divided into four phases, with a targeted completion date scheduled for an unspecified time in 2018.

Harley Down in Q1

Multiple outlets reported last week that Q1 2017 sales figures for Harley-Davidson are down 4.2 percent compared to last year. Sales in the U.S. are down 5.7 percent, while international sales were down 1.2 percent. This sucks for many reasons, but mainly because soon after the news of slow sales dropped, Harley announced that it would be laying off 118 employees at its vehicle operations plant in York County, Pennsylvania, per Asphalt and Rubber. Lance Oliver at Revzilla has a good piece on the news.

Harley-Davidson is known for not discounting its product as part of its strategy to remain a premium brand. But one of the big problems the company has faced in recent months is excess dealer inventory. Dealers had too many 2016 models, especially since news of the new Milwaukee-Eight engine was out, which gave many buyers a reason to put off buying and get a 2017 Harley with the new engine.

Harley-Davidson counteracted that by making new 2017 models scarce. Shipments were reduced 30 percent in the fourth quarter of 2016, giving dealers time to move the old 2016s. The company also offered incentives to consumers, such as special financing offers, up until February. But then Harley-Davidson did something else it doesn’t usually do. It offered incentives directly to dealers.

This May Be the Troll of the Year

Unlike the Baz save, I’m not ready to anoint this Troll of the Year. But, it definitely deserves a nomination. The Chicago Cubs won their first World Series last year since 1908, and the Cincinnati Reds decided to poke some fun at the some of the new Cubs fans.

As part of their #AZeroForUs campaign, Zero Motorcycles, the California-based electric motorcycle company, released this pretty funny ad. Their YouTube descriptions sums it up pretty well: “Why get a motorcycle? There are many reasons. Some we tell others, some we tell ourselves, and some we might not even know about until after we take the leap.”

What is Up with Kids and Driving Cars?

We may be flying around on motorcycles before we know it, thanks to a Russian startup called Hoversurf, which has released a video of their concept hoverbike, Scorpion-3.

Michael Antonovich, who works for a competing site that rhymes with Shamnsworld Motocross (tip of the hat to Matthes), recently caught up with three-time MotoGP World Champion Marc Marquez at Circuit of the Americas prior to the MotoGP round at the Austin, Texas, track. Instead of talking MotoGP, they talked abou Marquez’s first love—dirt bikes.

When I was eight years old I started road racing, but also motocross. By then I was a champion in motocross in Catalunya but was also competing in road racing. That’s when one team called me for road racing and said they would support me and that everything would be free. Then my father said, “Go to road.” I didn’t want to, because I was mad for motocross and was just riding all of the days. But my father pushed me to road, “Go to road because it’s free for us [Laughs].” I still continued with both championships but with road racing, it became more professional and I stopped motocross to ride MotoGP. Motocross is always part of my training.

Read the full article on Transworld.

Competing in SuperMoto on a $1,600 Craigslist Bike

Lane Splitter has a cool story on Peter Olivier, who after reading about a story on Bill Caswell racing a $500 Craigslist beater against professional rally teams, decided to plunge into the dark depths on Craigslist, find a cheap bike, and compete in six Pro Supermoto rounds in 2016. He found a bike on Craigslist for $1,600 and got to work.

“The bike was pretty much bone stock when I rebuilt the engine,” Olivier explained to Jalopnik in a phone interview. “I rebuilt it totally stock because I was afraid that it wouldn’t make it through the season.”

Building for reliability was key to making every race on the schedule without any major unforeseen costs that could derail the season. So, instead of a high-strung race build, he kept the bike mostly stock, save for a few suspension tweaks.

Earlier this week I was requested—nay, demanded—by my boss, and New Jersey native, Jason Weigandt, to talk about this Bon Jovi article in Bloomberg. Look past his obvious bias for anything to come out of Jersey (including MTV’s Jersey Shore) and you'll see this was actually quite interesting. Here’s a brief snippet.

It costs about $10.4 million for Bon Jovi to stage its This House Is Not for Sale tour. Here are some of the larger expenses:

$4.6 million to lease the light, sound, video, and motion-­control equipment. At each show, there are 225,000 preprogrammed video and lighting cues.

$1.1 million ​to provide catering for ​80 local crew members in each city and 75 full-time touring crew members who together eat about 465 meals and drink 415 cups of coffee a day.

Now you know why tickets cost so much. Read the rest here, it’s cool.

And with the First Pick in Tonight’s NFL Draft, the Cleveland Browns Select....

she could be the starting QB for the Browns pic.twitter.com/AwphpGvR3N